Despite a basket of goods costing Saskatchewan residents more each year, the province’s minimum wage remains the lowest in the country.

In June the provincial government said the minimum wage is calculated using an indexation formula “which gives equal weight to changes to the Consumer Price Index and average hourly wage for Saskatchewan.”

“We have established sustainable and predictable minimum wage increases,” Labour Relations and Workplace Safety Minister Don Morgan said at the time. “This helps families plan ahead and creates an environment for new workers to enter the workforce.”

The Saskatchewan Federation of Labour (SFL) says people earning minimum wage are struggling with the affordability of goods.

Johb said anything less than $15 an hour is “simply not enough.”

“Workers are worth more than 13 cents,” Johb said. “Today’s so-called increase is an embarrassment.”

Johb noted now is the time to invest in communities — due to the coronavirus pandemic — and a 13-cent raise is not enough to revive the local economy.

“At the start of the pandemic, many of the large corporations that employ minimum wage earners announced ‘hero pay’ for their workers, increasing their wages by several dollars per hour,” Johb said. “Now, those raises have been taken away, while the same corporations make billions in profits and front-line workers continue to risk their health and safety.”

Johb says she hopes the topic will become a campaign issue this fall, and that parties will commit to a $15 minimum wage.

Thursday’s minimum wage increase is the province’s twelfth since 2007 to account for rising inflation rates calculated by the Consumer Price Index (CPI), which measures the average change in prices over time that consumers pay for a basket of goods.

As defined by the Bank of Canada, a basket of goods includes food, shelter, furniture, clothing, transportation, recreation, medication and household expenses.

For example, a basket of goods that cost Canadians $100 in 2002 now costs Canadians $135.78, according to data provided by the Bank of Canada.

And in Saskatchewan, a basket of goods costs more than in other provinces where inflation has risen by less.

According to the CPI — which measures unseasonably adjusted inflation rates from 2002 to August 2020 — Saskatchewan has the second-highest inflation rate in Canada.

Since 2002, Saskatchewan has seen inflation grow by 40.8 per cent over 18 years, above the national average of 37 per cent, according to Statistics Canada.

The province that has experienced the highest inflation growth — at 44.2 per cent in the same timeframe — is Alberta, which has the highest minimum wage in Canada, at $15 an hour.

In comparison, Ontario has a $14 minimum wage, with its inflation growing less than Saskatchewan’s at 38.6 per cent since 2002.

British Columbia, a province that has experienced the second-smallest growth in inflation at 32 per cent since 2002, has one of the highest minimum wages in Canada, at $14.60. 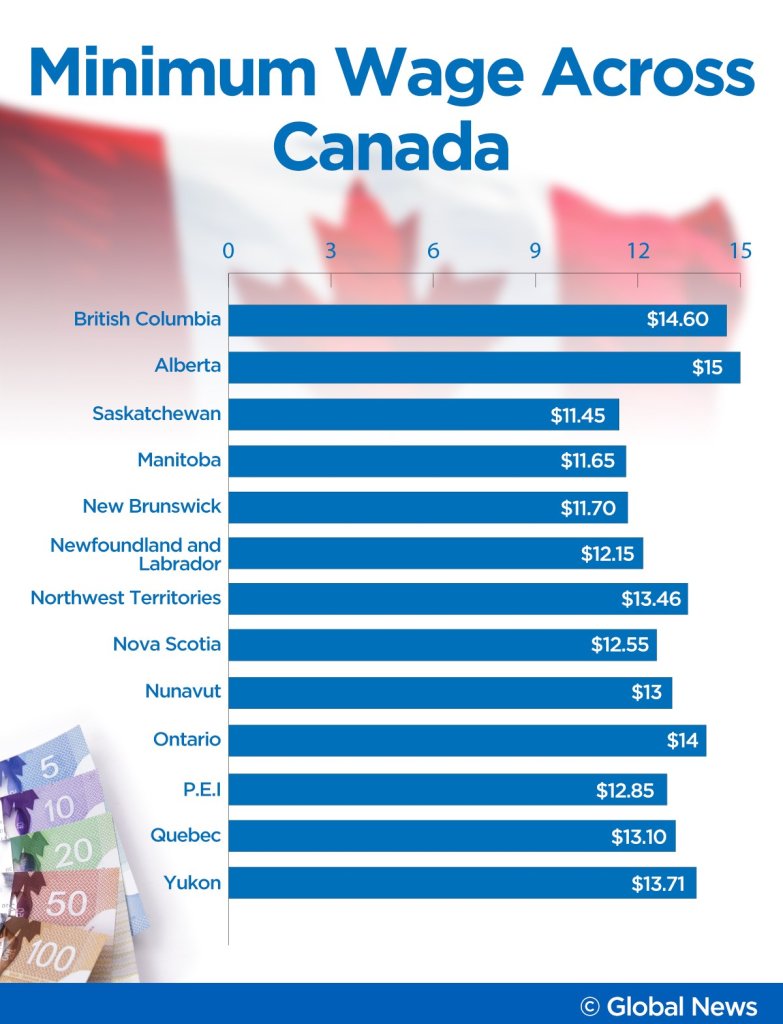