The pace of gains in Canada’s job market slowed in August, as Statistics Canada reported the economy added 246,000 jobs, and other data that experts say suggests billions in government benefits isn’t stopping people from getting back into the workforce.

Friday’s report, released just ahead of the Labour Day long weekend, marked the fourth consecutive month of gains after jobless claims spiked during COVID-19 lockdowns in March and April. That brings the overall employment number to within 1.1 million of pre-pandemic levels.

The vast majority of gains were in full-time work, which recorded a bump of 206,000, and which had been lagging behind gains in part-time employment, which rose by 40,000 from July.

As well, the number of Canadians working less than half their usual hours — likely due to COVID-19 — fell by 14.6 per cent. That leaves some 713,000 people still working fewer hours, down from a peak of 2.5 million in April.

“It’s still a challenge for many families and workers who are still off the job because people do want to get back to work,” said Hassan Yussuff, president of the Canadian Labour Congress.

“These numbers this month, again, prove, one more time, workers are prepared to go back to work provided there is work for them to go back to.” 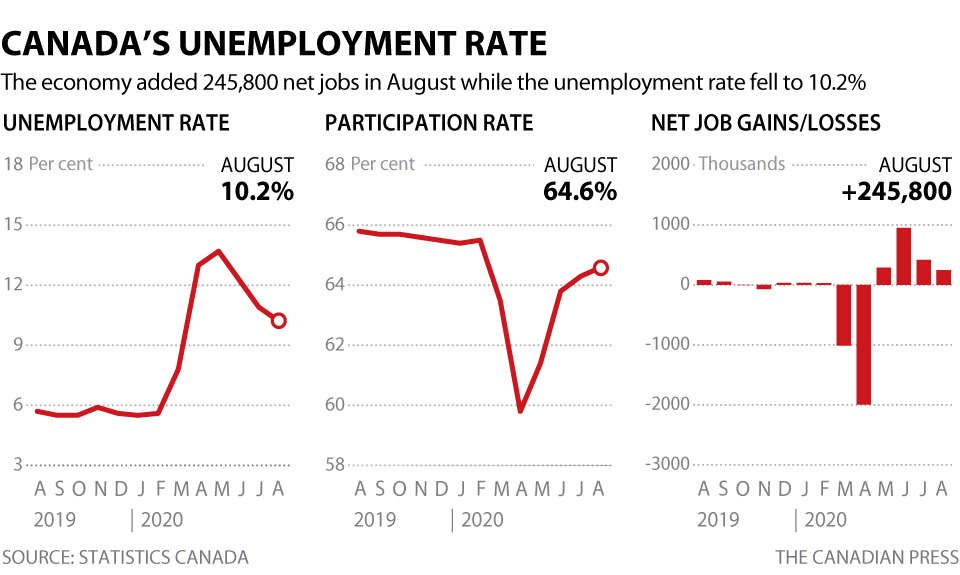 Government spending has more than replaced the amount of lost income workers have seen through the pandemic.

The latest figures for the Canada Emergency Response Benefit showing almost $72.6 billion in benefits paid out since its inception shortly after COVID-19 forced economic lockdowns in March, through to the end of August.

The participation rate in August — a measure of all those employed or looking for work — is now within 0.9 per cent of where it was in February, a sharper rebound than many expected, said CIBC senior economist Andrew Grantham.

The rebound suggests federal aid hasn’t acted as a disincentive for people to look for work, he said, and may not going forward with a suite of changes being proposed.

The Liberals want to replace the CERB with a $22-billion package of three new benefits that would allow workers to keep some payments while earning more.

“There is more flexibility for people to earn money, but still have a little bit of support there, which, again, should encourage people to return to the labour force that haven’t done so,” Grantham said.

“It does appear as of August that even with these income benefits in place, that hard-working Canadians did actually want to return to the workforce.”

Mikal Skuterud, a labour economist from the University of Waterloo, noted the number of people who had jobs in March and are looking for work now has skyrocketed over the summer, making the search activity rate comparable to other recessions.

“There are still a large number of workers who are not working and who have been displaced as a result of this and it doesn’t look like they’re going back to jobs,” he said.

Some older workers, he said, may simply decide to retire. Younger low-wage workers in hard-hit service sectors will have to find new work as part of a reshuffling of the workforce that could take years to play out.

The participation rate for women increased by 0.8 per cent, while employment rose at a faster pace than men for the third straight month. However, employment remained far off pre-pandemic levels for mothers with young and school-aged children.

There may be a rebound in motherhood employment this month as schools reopen and students and teachers head back to classrooms, removing some of the child-care strain.

Behnoush Amery, a senior economist with the Labour Market Information Council, said there will remain structural challenges in the labour market for working mothers  — challenges presented by COVID-19 that have also hit immigrants, visible minorities, students and low-wage workers harder than others.

Unemployment rates, not seasonally adjusted, for Arab workers was 17.9 per cent, followed by 17.6 per cent for Black workers, and then 16.6 per cent for those who identify as Southeast Asian.

Employment Minister Carla Qualtrough said in a statement that the government is taking a “comprehensive approach” to helping those who still need support, pointing to the throne speech later this month that will outline the Liberals’ “vision for the future.”