By Jim Bronskill The Canadian Press

A new opinion survey suggests Donald Trump’s recent decision to slap a tariff on Canadian raw aluminum is garnering poor reviews on both sides of the border.

In a web survey conducted by polling firm Leger and the Association for Canadian Studies, 58 per cent of American respondents said they disagreed with the 10 per cent import tax.

In what comes as less of a surprise, 90 per cent of Canadians who took part in the survey objected to the White House’s tariff.

Since polls created from internet panels are not random samples, the survey cannot be assigned a margin of error. 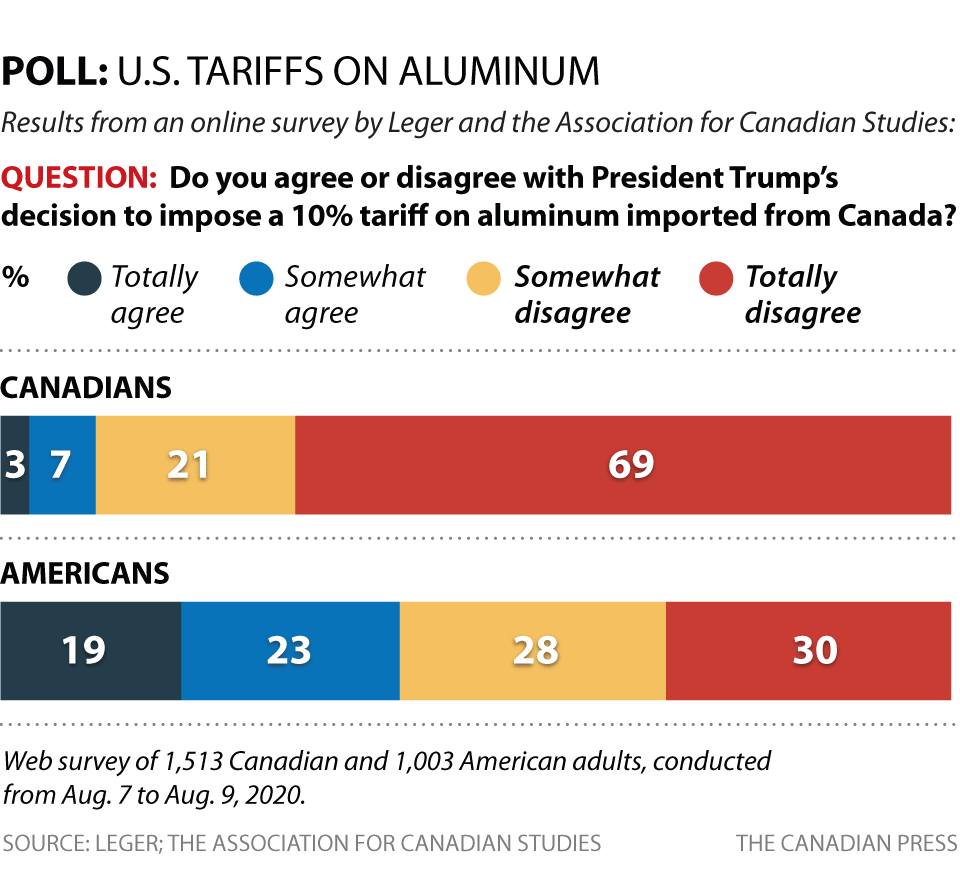 The polling firm says that using data from the 2016 census, results were weighted according to age, gender, language spoken, region, level of education and presence of children in the household in order to ensure a representative sample of the population.

Trump announced last week he was reimposing a tax on Canadian raw aluminum because Canada had broken a promise not to flood the U.S. market with the product.

“In imposing these tariffs, the United States has taken the absurd decision to harm its own people at a time its economy is suffering the deepest crisis since the Great Depression,” she said.

“Any American who buys a can of beer or a soda or a car or a bike will suffer.”

The comments might help explain why 28 per cent of Americans surveyed said they somewhat disagreed with Trump’s move, while 30 per cent said they totally disagreed.

Jean-Marc Leger, president of the survey firm, suggested the numbers reflect a lack of a clear rationale for the action by the mercurial U.S. president.

“Why the 10 per cent? Why at this moment?” he said. “It looks like another impulsive decision.”

Read more: Trump’s aluminum tariffs ‘absurd,’ Canada to hit back with measures worth $3.6B, Freeland says

Sixty-nine per cent of Canadians who participated in the survey said they completely disagreed with the tariff, with 21 per cent somewhat opposed.

Seventy per cent of Canadian respondents said Ottawa should fight back by imposing tariffs of its own on U.S. products.

The trade spat shattered the brief harmony between Ottawa and Washington that followed a successful renegotiation of the North American free trade agreement.

While nearly two-thirds of Americans told Leger that Canada and the U.S. benefit equally from their commercial exchanges, only 38 per cent of Canadians supported the notion.

Trump has also proposed banning popular video-sharing platform TikTok on national security grounds due to its corporate ties to China.

Read more: Trump’s tariffs on Canadian steel and aluminum — A timeline of key events since 2017

Forty-six per cent of American respondents supported the idea.

Fifty-four per cent of Canadians said they believed the Chinese government was using TikTok to spy on people. But only about one-third said Ottawa should outlaw the platform.