COMMENTARY: Canadians support the fight against racism, but key issues confuse and divide them

The fallout from the killing of George Floyd by police in Minneapolis has moved people around the world to consider the issue of racism in their own country.

This includes Canada. Even though we hold on to our belief that Canada compares favourably to the U.S. when it comes to racial justice, we are confused and divided about what we are dealing with in our own country.

While almost all of us (89 per cent) agree that racism is a terrible thing, a significant number of us are uncertain about the type of racism we’re facing in Canada. Are we dealing with systems of power and prejudice poisoning the roots of our society (systemic racism), or are we dealing with racist views held by individuals?

Perhaps it is a bit of both. Our prime minister has focused on eradicating systemic racism and most Canadians (60 per cent) agree with him. However, nearly a third of us (32 per cent) believe that claims of systemic racism in Canada are an exaggeration.

While 32 per cent may not seem like a big number, this is close to the percentage of votes the Liberal Party won in the 2019 federal election to form a strong minority government. A third of the population can be a decisive minority in a Canadian election, depending on how it is distributed. The people in this 32 per cent and their views shouldn’t be dismissed just because the majority thinks another way.

Furthermore, the more specific questions on systemic racism get, the more divided opinion appears to be. While half of Canadians are prepared to say our institutions — government, the justice and education systems, and journalism — are systemically racist, the other half disagrees. The RCMP, the focus of attention lately, has half of Canadians saying it doesn’t harbour systemic racism.

Even on the aspirational question of whether Canada has gone far enough in making sure all Canadians, regardless of ethnicity, racial or religious backgrounds have equal rights, the public is split. Half of us agree we have; the other half disagrees.

When we question whether Canada is systemically racist, what do we think about our fellow Canadians? Are we racists?

What about you? Do you see yourself as racist? When it comes to our own values, we are pretty sure we aren’t racist. More than three quarters of us (78 per cent) confidently say we aren’t racists. Yet, more than half (of us 54 per cent) think everyone is at least a bit racist, and nearly half of us say we sometimes have racist thoughts we wouldn’t talk about in public.

Commentary: Yes, there is systemic racism in Canada — our history is filled with it

If we struggle with our personal views on race, do we act on them? We say we don’t. More than four in five (86 per cent) wouldn’t have a problem with someone from a different race moving in next door, and only 15 per cent of us say we wouldn’t marry or have a romantic relationship with someone from another race. But, 43 per cent of us think races are fundamentally different from each other.

Further on divisions, there are strong demographic differences on opinions about racism and tolerance issues.

These demographic divisions are like those separating voters who choose more conservative options in most of our elections from those who vote for more progressive options. 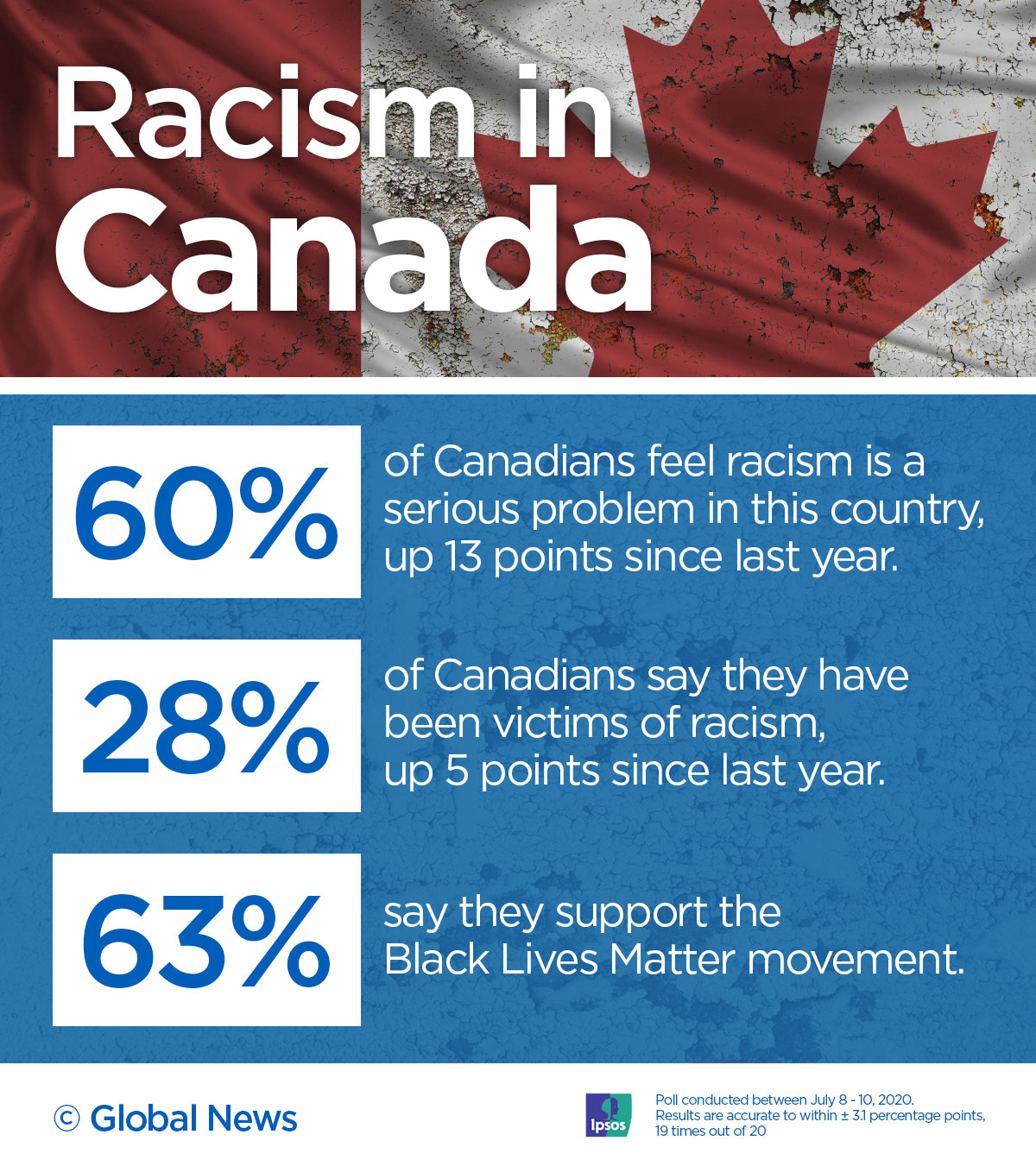 While race has not been a major division in Canadian politics in the past, that doesn’t mean it won’t be in the future. This is because the distribution of racialized communities in Canada increasingly aligns with our political map.

While some racialized Canadians do live in small towns and rural communities, the vast majority live in our politically powerful suburban communities. This is the biggest collection of swing ridings in Canada — they swing between the Conservative Party and the Liberal Party.

Any political party that wants to win an election now must do it in the suburbs. Connecting with racialized communities and how they view racism will be an important part of this. Especially given our ongoing focus on attracting more immigrants, which these days are mostly visible minorities, to offset our aging population.

What’s difficult to sort through in all of this is whether racism is an issue of the moment driven by events in the news – especially in the US – or whether it is something different for Canadians this time. There are some signals we could be experiencing a watershed moment on race in Canada. Changing the names of sports teams and debating police budgets, not to mention 63% of Canadians supporting Black Lives Matter, is something we wouldn’t have seen a year ago. There is some momentum to build on here. The question is will it last this time.

Darrell Bricker is CEO of Ipsos Public Affairs and the author of NEXT: Where to Live, What to Buy, and Who Will Lead Canada’s Future (Harper Collins, 2020).