An investigation continues into the cause of an all-terrain shuttle vehicle rollover near the Columbia Icefield Discovery Centre Saturday afternoon that resulted in three deaths and many injuries.

Jasper RCMP said it is conducting the investigation along with the K Division Collision Analyst, Occupational Health and Safety and Alberta Commercial Vehicle Enforcement.

“Our investigation into the rollover is still ongoing. We are continuing to obtain witness statements, gather information, identify the deceased and complete next-of-kin notifications,” RCMP said in a news release.

“Efforts are currently underway to remove the vehicle and complete a mechanical inspection. At this time, we are unable to confirm the cause of the rollover.”

The Ice Explorer involved in the crash is part of Banff Jasper Collection by Pursuit’s fleet, which provides tours in the area.

“Right now it would be inappropriate of me to give any comment outside of the investigation,” president David McKenna told media Sunday afternoon. “I think we need to let the investigators do the work and then we can all find out and get to the root of the accident.”

Alberta Health Services (AHS) confirmed three adults died in the crash, while the other 24 people on the shuttle suffered various injuries and were transported to hospitals in Hinton, Grande Prairie, Edmonton and Calgary.

“Nineteen of the 24 patients were transported by ambulance or STARS to the Jasper-Hinton airport, and were then transferred to hospital by fixed wing air ambulances,” AHS said in a statement

“Five patients were transported by ground ambulance to either Banff Mineral Spring Hospital or Foothills Medical Centre in Calgary.”

One of the people injured in the crash was the vehicle’s driver, McKenna confirmed.

“I can’t really give you details or a name as the police have not released that information yet. But I can say we have been in touch with the family.”

Twenty-eight ground ambulances, fixed wing ambulances, and helicopters from the North, Edmonton, Central and Calgary Zones responded to the crash.

“Due to the extremely difficult terrain and no road access to the crash site, some patients were triaged and treated near the bus before being air lifted from the scene to waiting ambulances at a nearby staging area,” AHS said.

Edmonton and Calgary hospitals were put on “Code Orange” alert to be prepared for the high number of patients with critical and serious injuries.

READ MORE: Driver killed after being struck by own tour bus in Columbia Icefield parking lot

STARS Air Ambulance said all three of its bases from Calgary, Edmonton and Grande Prairie responded to the incident.

STARS said two patients were transported in critical, potentially life-threatening condition. A 31-year-old man was flown to the University of Alberta Hospital in Edmonton and a middle-aged woman was taken to the Foothills Medical Centre in Calgary. 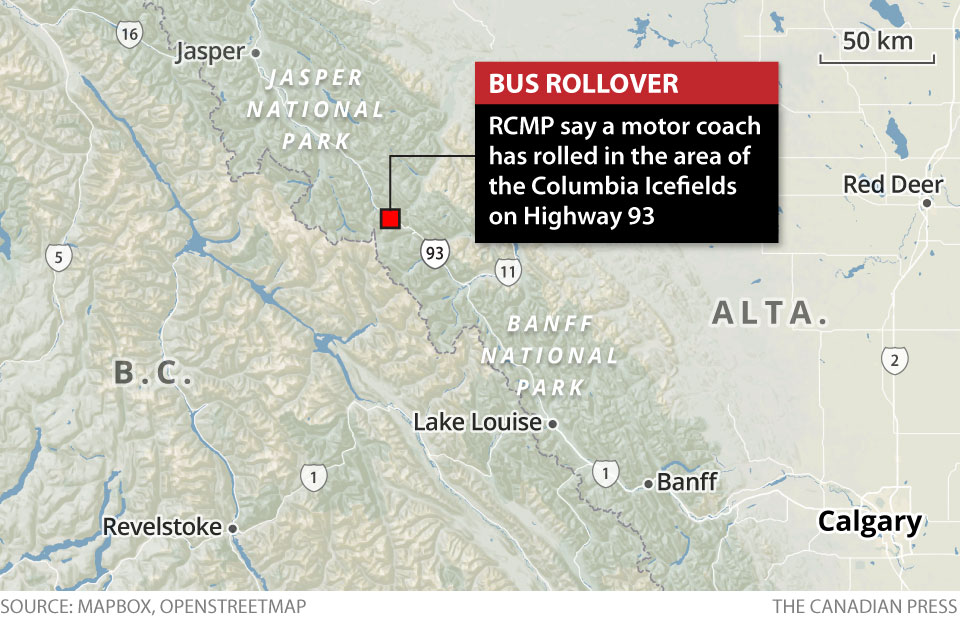 Pursuit said it is supporting the RCMP in its investigation and the company has suspended its operations in the Columbia Icefield.

“I’d like to extend our deepest condolences to the family and friends of the deceased as well as our sympathy to those injured in the accident,” vice president of operations Stuart Back said.

“We’re actively reaching out to the families of those affected offering support as needed and requested.”

Pursuit president Dave McKenna said the company has been providing tours on the Ice Explorer vehicles for about 39 years and there has never been an incident where a passenger sustained a serious injury or was killed prior to Saturday.

“We’ve been operating these vehicles since the early 80s, so we’ve had over 16 million passengers safely taken onto the ice over all these years,” McKenna said. “It’s a favourite of literally millions who have come here to visit, so we’re deeply saddened with this tragedy today.”

The company’s fleet includes 22 vehicles, all of which McKenna said were “constantly refurbished.”

The vehicle had 27 people aboard – 26 passengers and one driver – when the accident happened.

“It was the full, maximum load that we could take under the COVID rules,” McKenna said.

Pursuit requires all of its drivers to have a Class 2 licence with an air brake endorsement, similar to what anyone who drives a highway motorcoach would have.

According to McKenna, that’s the minimum requirement when applying for the job and then the company gives staff “extensive” in-house training on the operation of Pursuit’s vehicles.

Prime Minister Justin Trudeau sent his condolences on Twitter to those impacted by the tragic incident.

To those who lost a loved one in yesterday’s bus crash at the Columbia Icefields, know that we are here for you and are keeping you in our thoughts. We also wish a full recovery to those who were injured. And to the first responders, thank you for your quick action and hard work.

“Unfortunately when we looked a little bit closer we saw the rockslide also took out one of the snow coaches and it ended up landing on its roof at the bottom.”

Angela Bye said she also did the tour Saturday morning and spent time at the icefield afterwards when she noticed something had happened to one of the tour vehicles.

“We went down at the bottom of the hill to go look closer at the foot of the icefields and as we were looking up we noticed one of the vehicles looked like it was flipped up with the wheels up,” Bye said.

“We didn’t see emergency vehicles for a while afterwards and couldn’t tell when they first arrived. When we were leaving the area we saw quite a few more arrive. We got passed by three or four ambulances, a couple fire trucks and many many parks emergency vehicles.”

The identities of the three victims have not yet been released.