Photographers are sharing gorgeous photos of a rare comet currently visible in the night sky over British Columbia this month.

Amir Hariri of Vanexus photography said he caught the comet on a dark road in Abbotsford farm country around 3 a.m.

“I’m always struck by the scale of our universe when I’m photographing the night sky. Last night was the same, just watching this comet move up and eventually disappear was an absolute joy,” he posted. 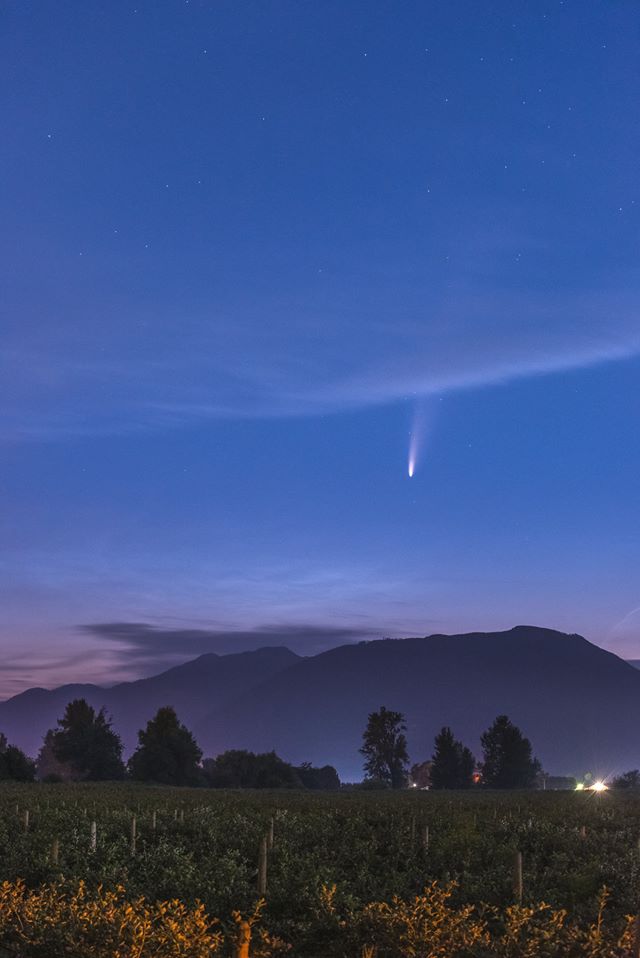 That means it only appears in Earth’s sky once every several thousand years — as compared to Halley’s Comet, whose orbit brings it into range every 75-76 years. (It won’t pass Earth again until 2061).

“It’s coming from outside of our solar system, coming in and flying by. It just made its closest approach July 3 to the sun,” she said.

“It’s going towards the closest approach to Earth around July 22, and then it will slingshot out and leave our solar system.

“So this really is a once-in-a-lifetime comet to check out.”

Read more: How to see the ‘once a decade’ comet NEOWISE in Canada

Comet NEOWISE is named for the NEOWISE spacecraft that discovered it in March.

Wang says NEOWISE is currently visible in the pre-dawn morning by looking northeast, but that as it gets closer to Earth, it will become visible after dusk in the northwest.

She said it’s currently visible in the constellation Auriga, which can be found by tracking the star Capella — the second brightest star in the night sky.

“When I went out last night, I was actually able to see it with my naked eye by looking at the comet and looking slightly to the right or left of it, using my peripheral vision,” she said.

“Of course, a pair of binoculars makes everything a lot easier, and using long exposure on a camera can up the brightness a little bit.”

Ironically, Wang says the comet will become less bright the closer it gets to earth, meaning interested stargazers will want to get out sooner rather than later to catch a glimpse.

Comets are balls of icy gas and dust, or “dirty snowballs,” Wang says. Their distinctive visible tails are caused as bits of the comet break off and are left in their wake.