Dee Nguyen has issued an official apology for her remarks about the Black Lives Matter movement that got her fired from MTV’s The Challenge.

The former Geordie Shore star apologized to her cast members on the reality competition series and the production crew and staff at MTV.

“I want to sincerely apologize to my fellow cast members, the production crew at Bunin-Murray and the staff at MTV for my choice of words and actions in the most recent events. What was stated wasn’t meant to be hurtful or discriminatory in any matter. It was a knee jerk of a reaction and it’s certainly not the way that I feel nor what I meant,” she said in a statement to People.

“I would love to take it back. But it is out there and to set to record straight. Racial intolerance is intolerable and unacceptable,” Dee continued. “Having had to deal with racism my entire life, ironically through all this, there is a warm feeling I have with the fact that humans are standing together to call out unacceptable comments and behaviours that in the past were rarely called on. Again, we are shown that you can be judged in a second on all social media platforms.”

Dee’s management team also released a statement on Wednesday in regards to her comments.

The 27-year-old reality star posted the statement from her management team, BLVK Management, on Instagram.

“At this time our team wanted to kindly state we stand strong behind our fellow MTV client @deenguyen,” the statement began. “We respectfully ask your outlet or business organization to let our team conduct an internal review as this situation unfolds.”

The statement continued, “Our team is as shocked as you could imagine and would like to affirm that BLVK does not tolerate any form of racism what so ever we also have an obligation and duty to our clients to ensure their voices are heard and if any of them have made a mistake, allow them to have the opportunity to fix it or clarify it.”

“We are working on this as we speak and ask for some patience before any further decision is made. Thank you,” BLVK Management’s statement concluded.

On Monday, The Challenge announced it had “severed ties” with Dee, following her comments.

“As a result of Dee Nguyen’s offensive comments on the Black Lives Matter movement, we have severed ties with her. Out of respect for our Challengers, we’ll air our season as planned. We strongly condemn systemic racism and stand with those raising their voices against injustice,” The Challenge tweeted.

As a result of Dee Nguyen’s offensive comments on the Black Lives Matter movement, we have severed ties with her. Out of respect for our Challengers, we'll air our season as planned. We strongly condemn systemic racism and stand with those raising their voices against injustice.

After MTV announced it was parting ways with Dee, she took to Instagram to share a statement.

“The last 24 hours have made me realize what is important and that is forgiveness. I would like to offer my sincerest apology to my colleagues to whom I have hurt directly and indirectly due to my insensitive remarks,” her statement began. “Let me be clear I am a POC that cares about BLM.

“I believe in this movement and I’m stepping away from social media to focus on my well-being and mental health. This is not a goodbye, it’s a (sic) I will see you again. To my fans thank you for believing in me and your support. It helps me.

“I see every single one of you and I remember your stories. Stay strong and safe my friends,” Dee concluded.

Dee came under fire over the weekend after she tweeted: “IDK (I don’t know) why some of you think I’m anti-BLM. I’ve been saying that since the day I lost my virginity.” 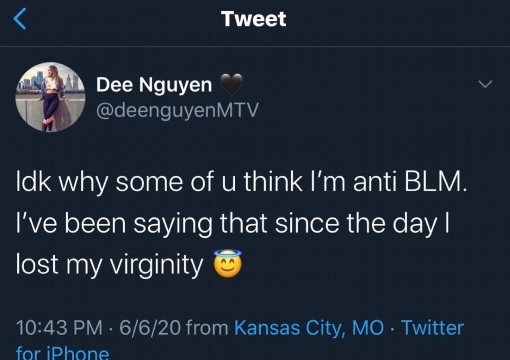 The Challenge cast member Bayleigh Dayton shared screenshots of Dee’s comments, which have been deleted.

“THIS IS NOT HOW YOU SUPPORT BLM. I’m disgusted and disappointed. THIS IS NOT A TREND. THIS IS LIFE OR DEATH FOR US. Posting for clout about the death of Black people? Shame on you @deenguyenMTV,” Bayleigh tweeted.

Bayleigh also attached a screenshot of a fan telling Dee to “read the room” and stop posting photos of herself on Instagram.

In response, Dee wrote: “People die every f—ing day. U don’t know me or what I do. I suggest you wake the f–k up and get off social media. 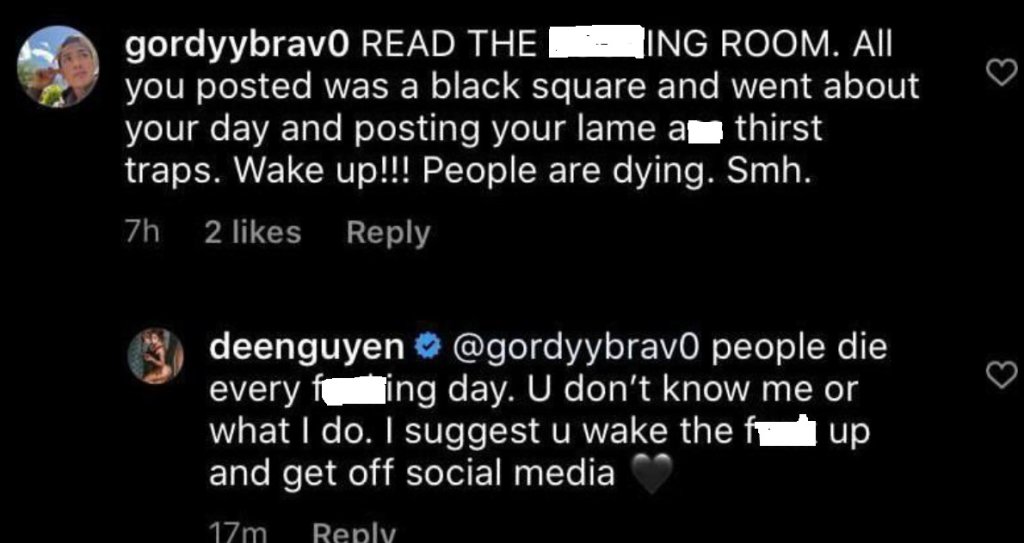 The Challenge star Wes Bergmann revealed on Tuesday that he helped Dee get mental health support after the show cut ties with her.

Dee was staying at 35-year-old Wes’s house with him and his wife in Kansas City, Mo., during the coronavirus pandemic because she lives in Australia and didn’t catch a flight back ahead of the lockdown in the U.S.

After Dee’s Black Lives Matter comments, Wes took to Twitter to share that he had asked her to leave his house.

“What Dee did was absurd, insensitive and wrong. But most of all it was ignorant.

“Dee was basically my daughter. I made the decision to ask her to leave in less than an hour. This public decision is what the world needed and deserved. But it doesn’t stop my grieving.”

Wes said that he proceeded “down a 24-hour road of finding a place for her to go.”

“Her mental health by this time had deteriorated to a level where being in a hotel alone would have been the most dangerous option of all. An international flight out of Missouri in the early evening of a pandemic is non-existent. And none of the above keep her safe, heal or educated her,” he wrote.

“Yesterday we successfully landed her in what I’m going to refer to as a mental health lodge. We have sourced daily psychotherapy sessions in an effort to build her an outpatient care program where she eventually leaves,” Wes explained. “Where she’ll go is unknown at this second, and not the current priority ⁠— but my best guess is Australia.”