Almost half of those who died in the Nova Scotia mass shooting were the killer’s neighbours in rural Portapique, according to provincial records.

At least nine of the victims owned homes either next to Gabriel Wortman or close by, a Global News analysis of property records shows.

Police said Friday that 13 bodies had been found on roads and in homes in the vicinity of Wortman’s property.

The records are consistent with a Global News report that the killings began following a party near Wortman’s Portapique Beach Rd. residence.

Wortman allegedly left the party after getting into an argument with his girlfriend. He then allegedly tied her up in his house and beat her before returning to the party.

His closest neighbour, Lisa McCully, was among the victims. The teacher owned a property on Orchard Beach Road, immediately adjacent to Wortman’s land.

Elizabeth Joanne Thomas and John Zahl owned property on the same street as Wortman, while Joy and Peter Bond lived less than a kilometre away. 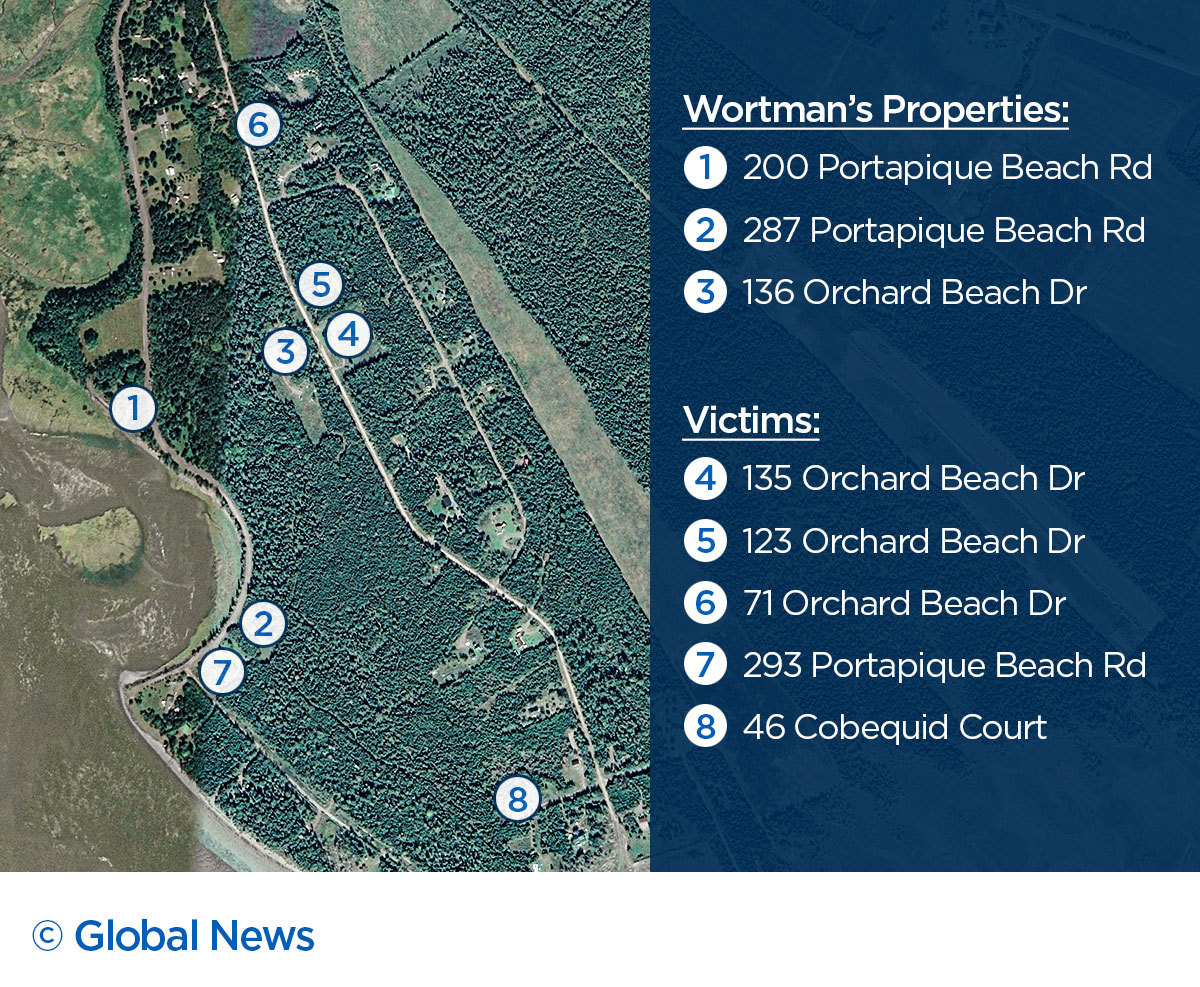 A recording of emergency responders made that night shows that ambulances were dispatched to Wortman’s street after 10 p.m. on Saturday.

“There’s a structure fire. There’s a person down there with a gun; they’re still looking for him,” according to the recording.

“The patient we have got shot by him. He was down there observing the fire, so there could be other patients around the fire that could be gone already.”

The RCMP has said the violence began in Portapique but that victims were also found in Wentworth, Debert, Shubenacadie/Milford and Enfield.

“When police arrived, members located several casualties inside and outside of a home,” the RCMP wrote in a statement.

Residents were evacuated while police searched for the gunman, who had apparently set fire to several homes and vehicles in the area.

Wortman fled in a mock RCMP vehicle, wearing an RCMP uniform. Police finally cornered him at noon on Sunday and he was shot dead.

The RCMP is investigating 16 crimes scenes in Nova Scotia.

Meanwhile, the RCMP has confirmed that Wortman did not have a license to own guns. Yet he had access to a number of weapons including a rifle, a handgun and a shotgun, sources told Global News.

A number of gun shop and shooting range employees from businesses located near the 16 crime scenes told Global News this week that their community is rife with questions about the source of Wortman’s arsenal.

“I don’t recall having met [Wortman] at all, but I knew one of the victims. You never know what causes someone to go off the rails like that,” one gun shop employee who asked not to be identified, said.

– With files from Mercedes Stephenson