Wall Street’s main stock indexes plummeted and the Dow Jones Industrials crashed 2,000 points on Monday as a 20 per cent slump in oil prices and the rapid spread of the coronavirus amplified fears of a global recession.

Trading was halted immediately after the opening, as the benchmark S&P 500 tumbled 7 per cent to its lowest since June 2019, triggering an automatic 15-minute cutout originally put in place to avoid a repeat of the “Black Monday” crash in 1987, when the Dow slumped nearly 23 per cent.

The energy index plunged 17.3 per cent to its lowest level since August 2004 and crude prices were on track for their worst day in three decades as Saudi Arabia and Russia moved to significantly ramp up production after the collapse of a supply cut agreement.

“The lower it does go, the more people are likely to panic even further,” said Rick Meckler, a partner at Cherry Lane Investments in New Vernon, New Jersey.

“Given the circuit breaker program, it’s likely that selling won’t continue at this pace throughout the day, but the psychology of things is very much a herd mentality.” 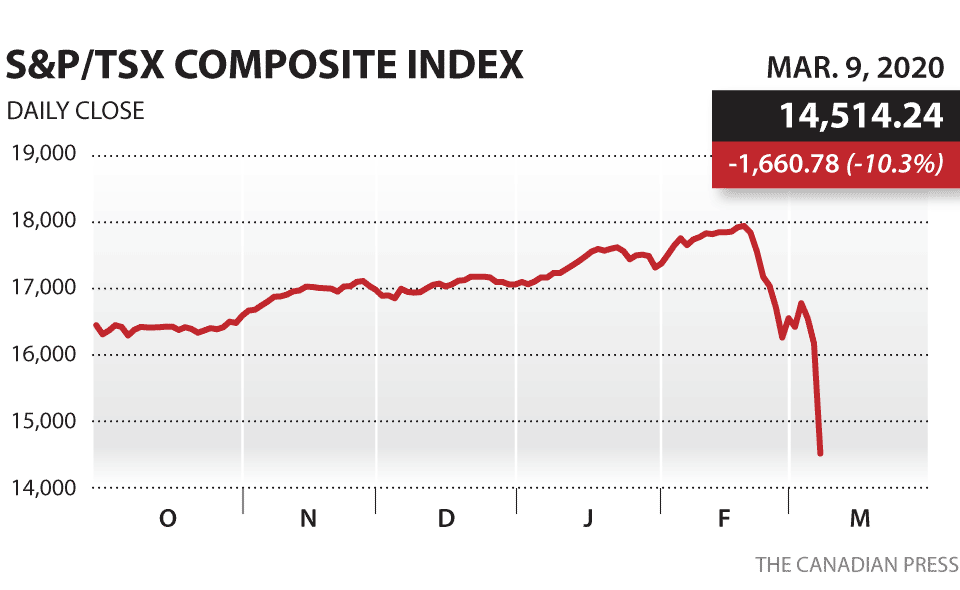 The Canadian dollar traded for 73.54 cents US compared with an average of 74.51 cents US on Friday. The April crude contract was down US$10.15 at US$31.13 per barrel and the April natural gas contract was up seven cents at US$1.78 per mmBTU.

Companies listed on the S&P 500 have now lost more than US$5 trillion in value in a sell-off sparked by fears that the coronavirus epidemic could end the longest U.S. economic expansion on record.

After scaling record highs as recently as three weeks ago, the S&P 500 is now only about 2.5 per cent away from moving into bear market territory, in one of the most dramatic turnarounds in living memory.

Wall Street’s fear gauge, halted for the first half hour after opening, jumped to its highest level since the 2008 crisis, while the Nasdaq Composite was on track for its biggest one-day percentage fall since 2011.

Declines on the blue-chip Dow were led by oil majors Chevron Corp and Exxon Mobil Corp, which fell more than 7 per cent.

Underlining the broad-based tumble, decliners outnumbered advancers for nearly 20-to-1 on the NYSE and the Nasdaq. The S&P index recorded 214 new lows, while the Nasdaq recorded 892 new lows.

The yield on the benchmark 10-year U.S. Treasury was on course for its biggest one-day fall in almost a decade, sending the rate-sensitive financials index down 7.9 per cent.

Traders now expect U.S. Federal Reserve policymakers to cut interest rates for the second time this month when they meet next week.

— With files by The Canadian Press