A clear majority of Canadians say most of the news coverage and social media posts they’ve seen about the federal election have been negative.

And experts say while fear and mud-slinging can be powerful motivators for voters, they can also backfire on parties.

According to an Ipsos poll done exclusively for Global News, 71 per cent of Canadians report seeing, hearing or reading mostly negative news about the parties and their leaders, compared to just 29 per cent who say what they have seen focused mostly on party policies and proposals.

That number is also highest among seniors, with 76 per cent of those aged 55 and over saying the same.

Sixty-four per cent of those who have heard mostly about policies say the same.

The polling also asked respondents which news stories they considered to be important to their voting decisions. 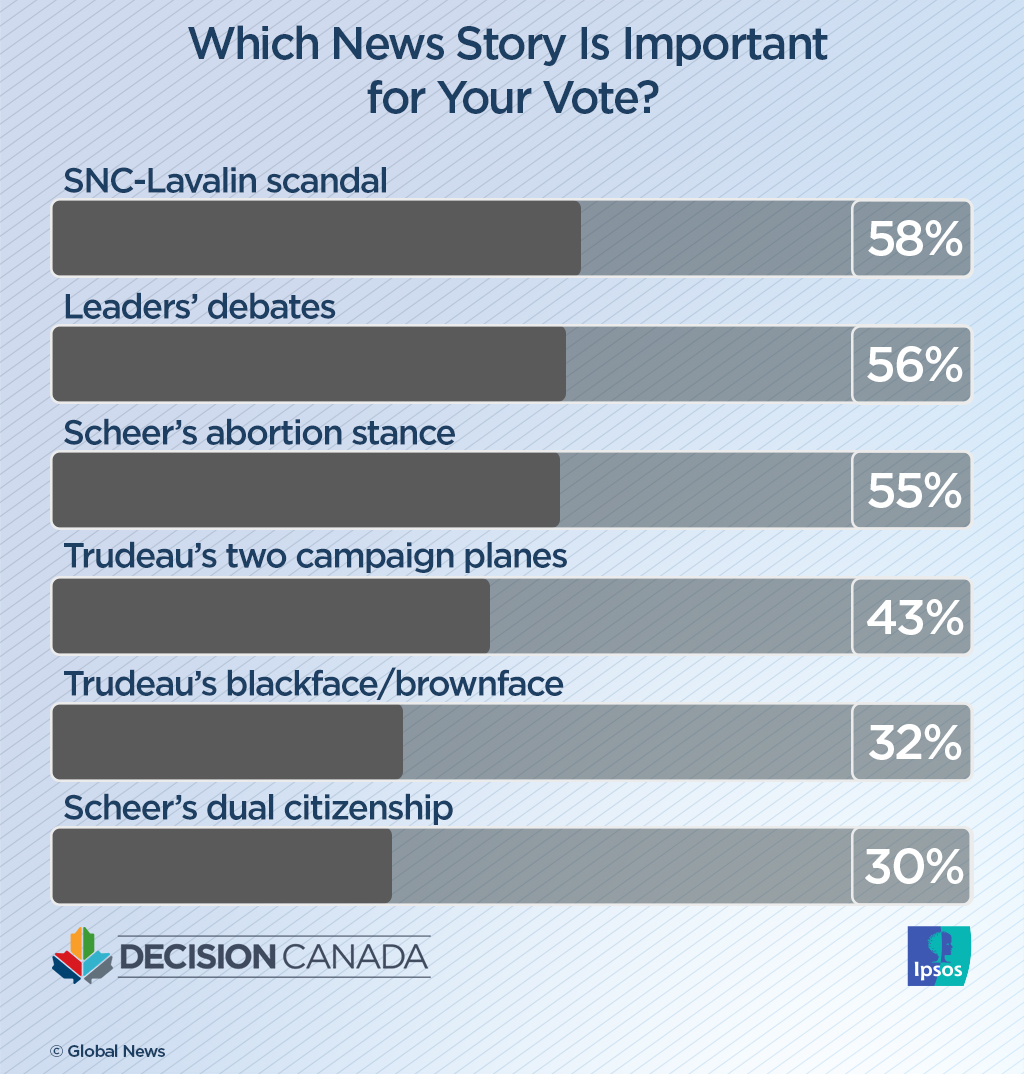 Most respondents (58 per cent) pointed to the SNC-Lavalin scandal, while 56 per cent flagged the leaders’ debates.

Conservative Leader Andrew Scheer’s stance on abortion came in third, with 55 per cent of respondents saying it was important in how they would vote.

ANALYSIS: Scheer’s pitch to Quebec might be too little, too late

Forty-three per cent said Liberal Leader Justin Trudeau’s use of two campaign planes was important to them, with just 32 per cent citing his repeated wearing of blackface and brownface.

Thirty per cent pointed to Scheer’s dual citizenship, which he did not disclose publicly until it was reported by the media.

Darrell Bricker, CEO of Ipsos, says the question now is whether fear, anger or hope will be bigger motivators for voters in deciding who to support.

Trending Stories
“They could be motivated by fear but what we’ve got here right now is a [showdown] between anger on the Conservative side and fear on the Liberal side, and a bit of enthusiasm on the NDP side,” he said.
Story continues below advertisement

“If Scheer ends up winning it’s because this was a referendum on Justin Trudeau.”

COMMENTARY: Minority governments can do some good, but they can also spell trouble

Lori Turnbull, an associate professor of political science at Dalhousie University, said a lot of how voters respond to fear and negativity in politics depends on what situation is being put in front of them.

“The scare tactics work if you can come up with a scenario where people are really afraid of it. People are motivated by fear or love and in politics, fear tends to work a little better,” she said, pointing to how Trudeau and the Liberals have attacked Scheer for being socially conservative.

“The Liberals have tried from day one to make us afraid of Andrew Scheer and have brought up quotes and situations from his past where he didn’t support same-sex marriage. That’s all designed to try to make us fear what might happen if Andrew Scheer becomes prime minister.

“And so if people truly feel afraid of that outcome, then their vote will reflect that.”

And the polling from Ipsos suggests that could be working.

With NDP supporter, though, 71 per cent said the biggest news story influencing their choice was the leaders’ debates.

Henry Jacek, a political science professor at McMaster University, said he thinks that’s a result of the calm and clear tone NDP Leader Jagmeet Singh took in the debates, which earned him wide praise among political commentators and voters.

In contrast, he said the negative tones taken by both Trudeau and Scheer, both in the debates and more broadly through the campaign, could backfire.

“People don’t like to hear these arguments about fear. I think they’ve been overdone,” he said.

“Certainly I think many people were very upset with the way Scheer attacked Trudeau in the beginning of the English language debate. I think that was a very bad mistake that turned a lot of people off. Now Trudeau is saying if you vote for the NDP, you’re going to get the Conservatives and I think there’s a lot of people who doubt that message, particularly if they live in a riding where the two main parties are the NDP and the Liberals.”

Both Trudeau and Scheer spent much of the week making pitches to voters that focused on attacking their main opponents, with Scheer warning about the possibility of a coalition between the Liberals and the NDP, and Trudeau urging progressive voters not to split the vote by casting their ballots for Singh.

And with just four days left until Election Day, the parties are showing no signs of switching gears now.

These are some of the findings of an Ipsos poll conducted between October 11 and 13, on behalf of Global News. For this survey, a sample of n = 2,204 Canadians aged 18+ was interviewed. A sample of n = 1,504 was interviewed online, via the Ipsos I-Say panel and non-panel sources, and respondents earn a nominal incentive for their participation. A sample of n = 700 Canadians aged 18+ was interviewed by live-interview telephone interviewers by landline and cellphone, using random-digit dialing. Quotas and weighting were employed to balance demographics to ensure that the sample’s composition reflects that of the adult population according to Census data and to provide results intended to approximate the sample universe (weighting efficiency = 66.9%). The precision of Ipsos polls which include non-probability sampling is measured using a credibility interval. In this case, the poll is accurate to within ± 2.4 percentage points, 19 times out of 20, had all Canadians been polled. The credibility interval will be wider among subsets of the population. All sample surveys and polls may be subject to other sources of error, including, but not limited to coverage error, and measurement error.