Close to three in 10 voters see the Conservatives as the party most committed to keeping their election promises, according to a new Ipsos poll focusing on trust.

Conducted exclusively for Global News between Oct. 11 and 13, the poll found that 28 per cent of respondents view the Conservatives as the party they trust to keep its election promises, while 23 per cent chose the NDP and 22 per cent cited the Liberals.

But more significantly, three in four of those surveyed (76 per cent) indicated they felt that no matter who becomes prime minister, they will wind up breaking their campaign pledges. 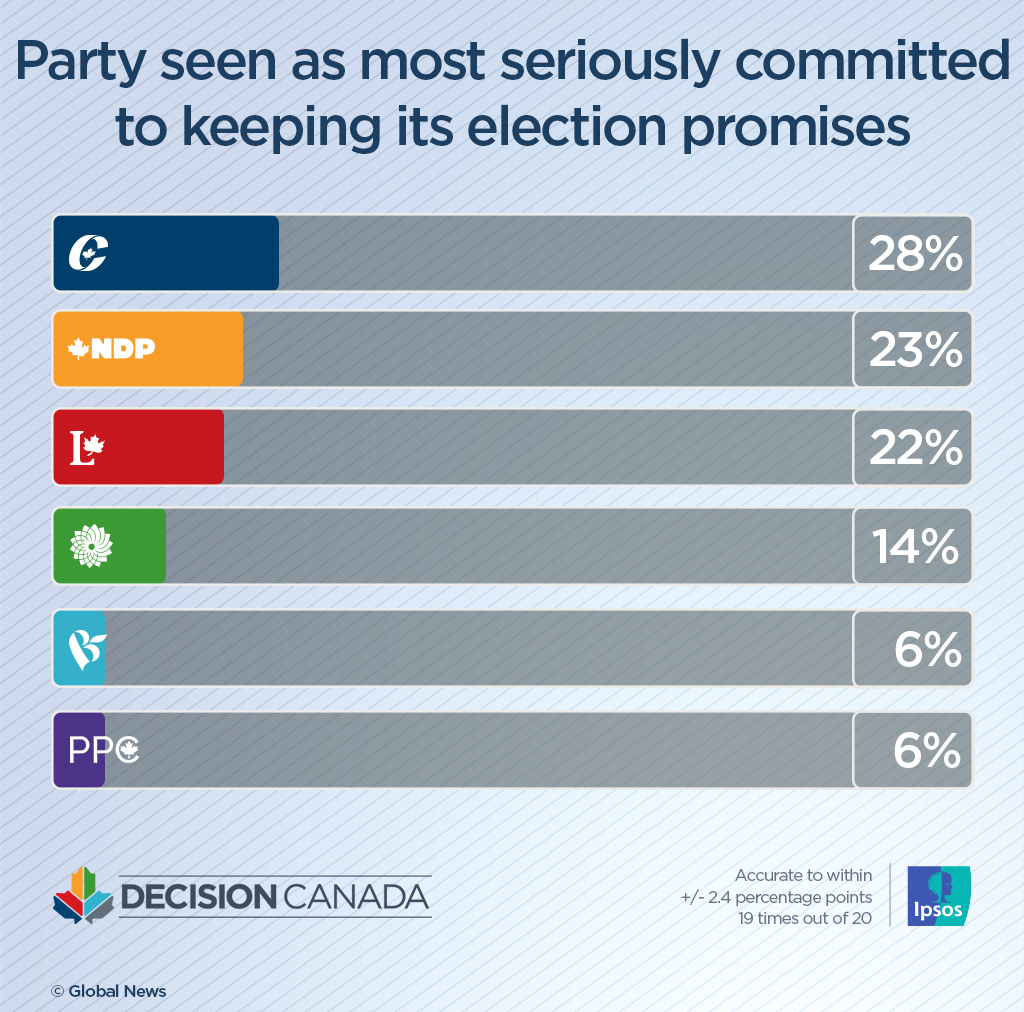 When polled about which party leader they trust the most, three in 10 said they don’t trust anyone.

“People just seem to be less trusting of their institutions and of their leaders than they used to be,” he said.

People notice when promises aren’t met, Simpson said. Political leaders will “promise the moon” in order to move swing votes in their direction, but “time and time again, Canadians are disappointed in so far as politicians don’t seem to deliver on most of their promises.”

In 2015, the Liberals promised that they would abolish the first-past-the-post electoral system. They held consultations but by early 2017 announced they were not going to deliver on this particular pledge.

In a letter to the democratic institutions minister at the time, Trudeau said “changing the electoral system, let alone a consensus, has not emerged.”

In a recent statement to Global News, a Liberal spokesperson said “no clear preference for a new electoral system emerged.”

READ MORE: Will promises broken by the Liberals have ballot-box impact?

Responses to the poll varied depending on where people lived. For instance, people in western Canada were more likely to see the Tories as serious about keeping their word on campaign pledges, with 50 per cent in Alberta and 46 per cent in Saskatchewan and Manitoba saying so in the survey. The Liberals were the top pick in Quebec (28 per cent) and Ontario (27 per cent). 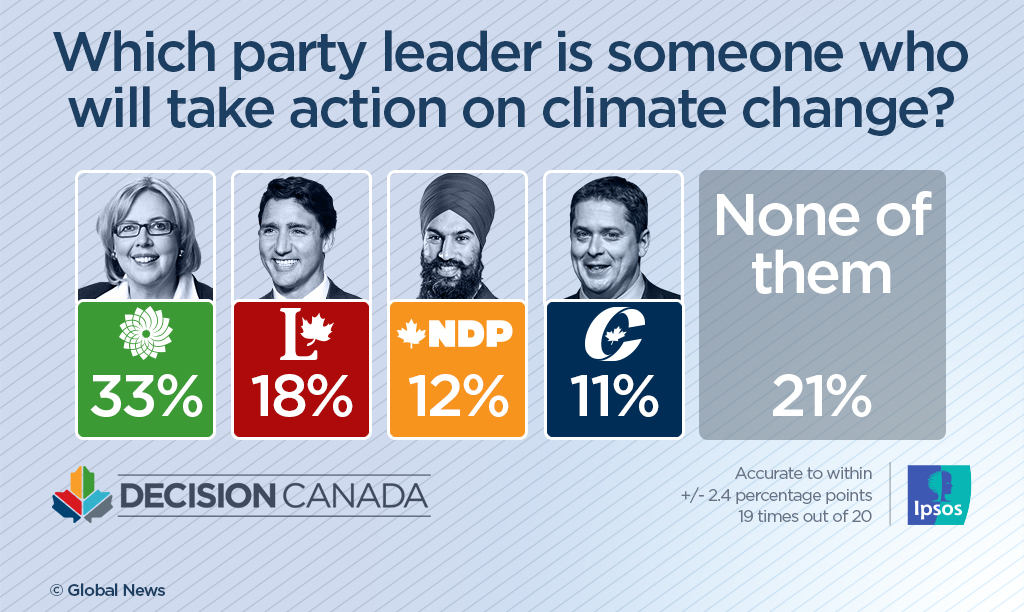 Atlantic Canada was particularly distrustful of party leadership, with nearly four out of 10 (39 per cent) saying they don’t trust any leaders the most.

As Simpson puts it, there is a “trust deficit” in this campaign. And in an election that isn’t underpinned by one particular issue, trust and credibility are important because all eyes are on the leaders.

“It’s important for the leaders to try to establish themselves as the most trustworthy and the most credible,” he said.

With no one issue dominating the campaign, and with eight in 10 of those surveyed (83 per cent) saying they will cast a ballot for someone they believe in, trust has a role to play in this election.

“The underlying current of the campaign then is trust,” Simpson said.

As for who would make the best prime minister, the Conservatives and Liberals are deadlocked, with 28 per cent picking Trudeau and 27 per cent picking Scheer. Singh is not far behind in third place (23 per cent).

This might come as unwelcome news for the Liberals and good news for the NDP, since Trudeau was up by five points over Scheer in this metric last week. 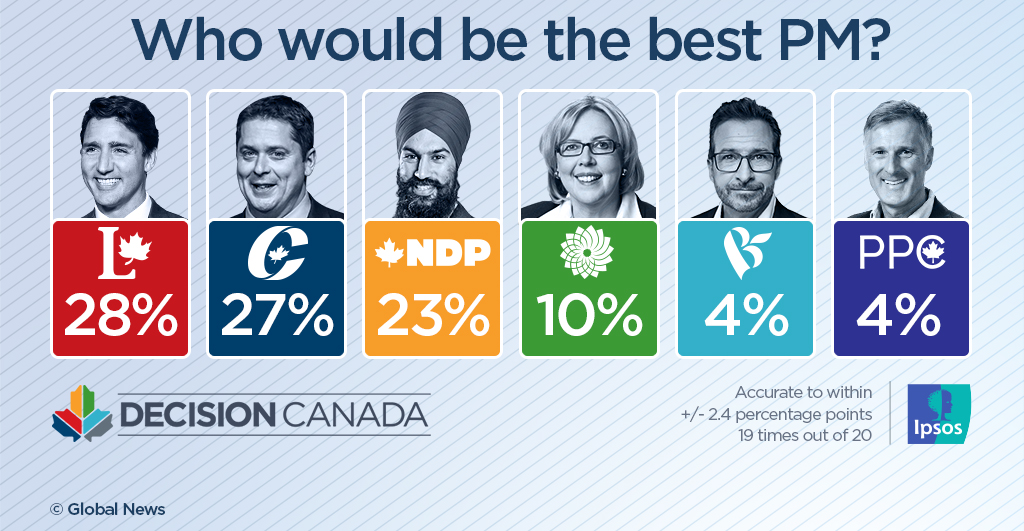 Singh has gained nine points since then, meaning more people see him as the leader most suitable for prime minister just a week before election day.

“There is a lot of late movement here in the campaign with people reassessing and trying to figure out … who they trust to lead us in the next government,” Simpson said.

Again, preferences vary depending on where respondents live, with Trudeau proving popular in Quebec (34 per cent) and western Canada favouring Scheer (Alberta at 55 per cent, Manitoba and Saskatchewan at 37 per cent).

Pollings has shown the Liberals and Conservatives in a close race for the past two weeks. A poll released Tuesday showed this deadlock hadn’t shifted, with the NDP seeing a boost in support instead. 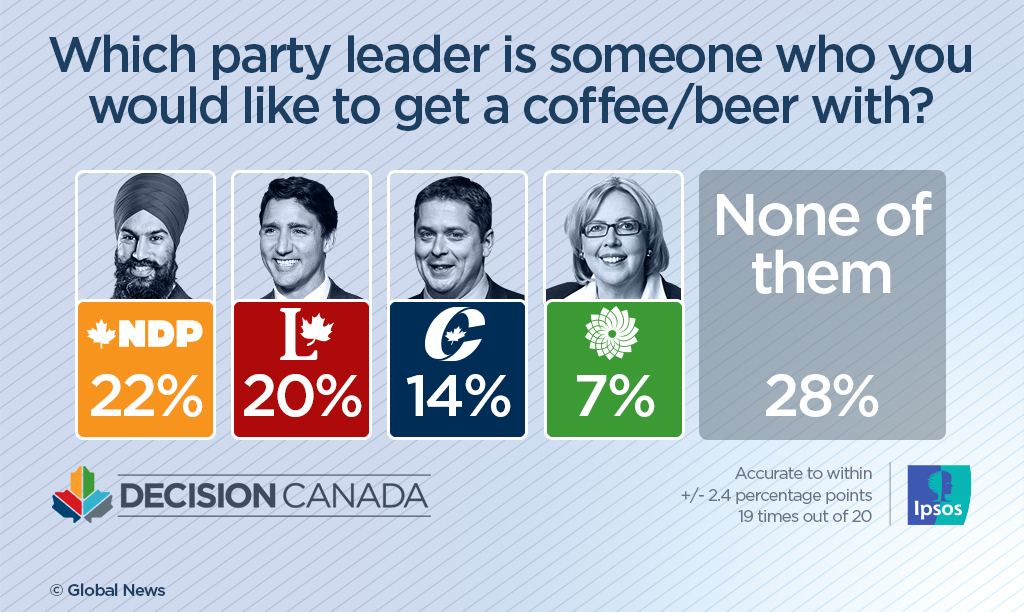 The Liberal Party’s messaging has been focused on painting themselves as the only viable choice for progressive voters who don’t want to see a Conservative government. Singh also recently raised the question of a Liberal-NDP coalition government to prevent Scheer from taking power.

“I don’t think he’s going to win a plurality of seats and lead the government,” he said. “But I think what people are looking at Jagmeet Singh and saying is, ‘Do I trust him to hold the balance of power?’ because that is a very likely scenario and situation for the NDP following next Monday’s election.”

The poll also asked people which leaders were seen as best to tackle the deficit or grab a drink with. Almost three in 10 respondents said they would pick none of the leaders to have a coffee or beer with (28 per cent), with Singh at 22 per cent and Trudeau at 20 per cent. 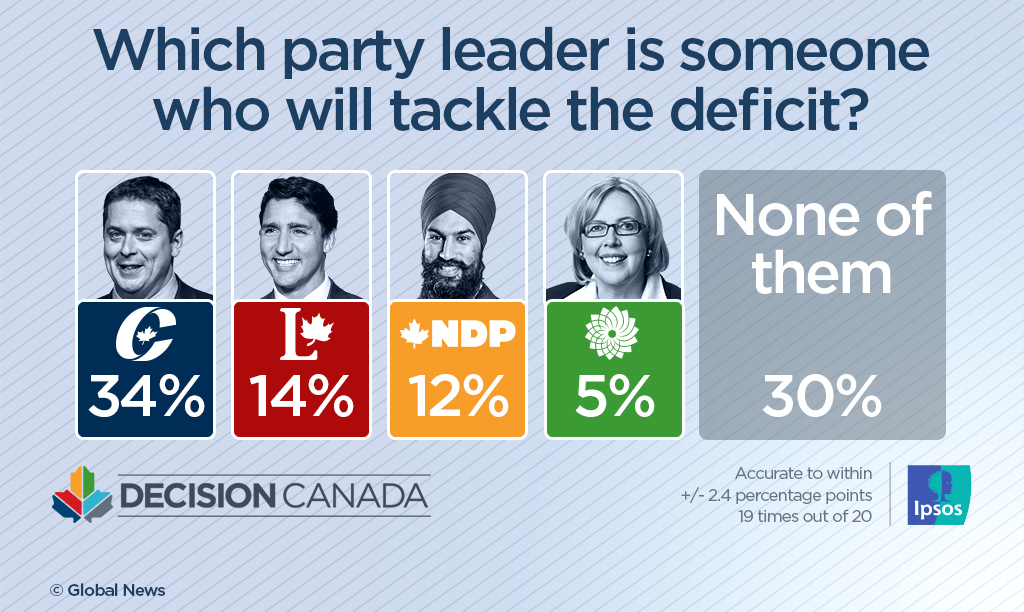 Scheer was seen by more than a third as the leader who can handle the deficit (34 per cent), while Trudeau was marked by three in 10 people as the best leader to represent Canada internationally.

The full data for this poll can be found here.

Exclusive Global News Ipsos polls are protected by copyright. The information and/or data may only be rebroadcast or republished with full and proper credit and attribution to “Global News Ipsos.” This poll was conducted between October 11 and 13, 2019, with a sample of 2,204 Canadians, with 1,504 from Ipsos’ online panel and 700 interviewed by phone. The precision of Ipsos online polls is measured using a credibility interval. This poll is accurate to within +/- 2.4 percentage points, 19 times out of 20, had all Canadian adults been polled.