“In the criminal investigation of the two fugitives in northern MB, the RCMP have requested aircraft support from the Cdn Armed Forces. Prompt reply — YES,” he wrote.

In the criminal investigation of the two fugitives in northern MB, the RCMP have requested aircraft support from the Cdn Armed Forces. Prompt reply – YES.

RCMP investigators have said they will be going door to door in Gillam, Man., over the weekend in their effort to find Schmegelsky and McLeod.

“Over the next 72 hours, investigators will conduct door to door canvasses in the town of Gillam and Fox Lake Cree Nation in hopes of generating new tips and information,” said RCMP Cpl. Julie Courchaine on Friday afternoon.

Courchaine said investigators are also “exploring the possibility that the suspects may have inadvertently received assistance in leaving the area.”

The Canada-wide manhunt for the two men is currently focused on the Manitoba town of Gillam.

“To restate, there have been no confirmed sightings outside of the Gillam area, however we remain open to the possibility,” she said.

Schmegelsky and McLeod have been charged with second-degree murder in the death of 64-year-old Leonard Dyck, a sessional lecturer at the University of British Columbia. The two are also suspects in the double-homicide of Australian Lucas Fowler and American Chynna Deese. RCMP say their last confirmed sighting was in the Gillam, Man., area. 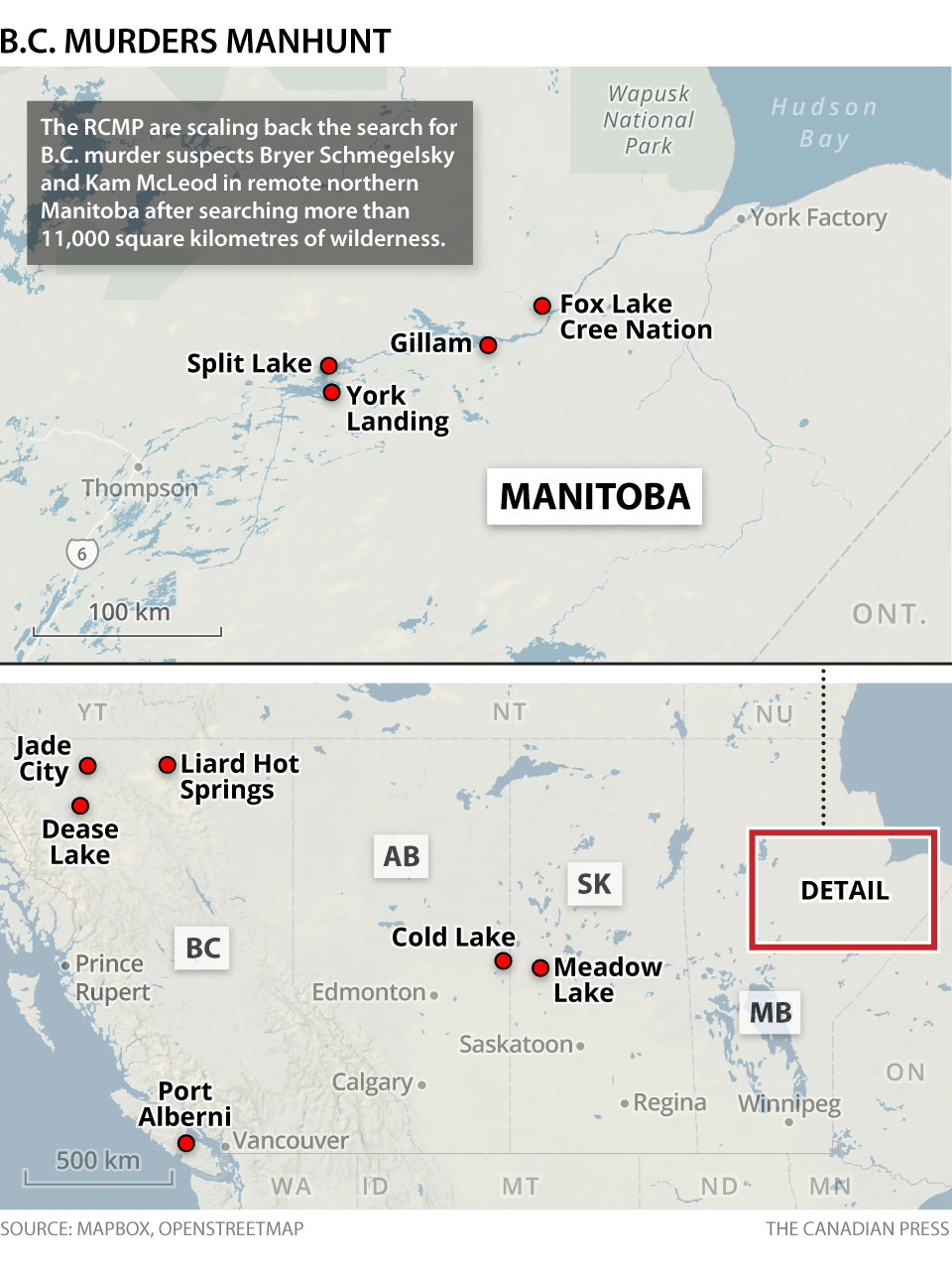 “It’s possible someone may have not been aware of who they were providing assistance to and may be now hesitant to come forward,” she said.

“Our plea today is that if anyone in and around those communities may have inadvertently helped them get out of the community, if someone did, please come forward,” she added. “These people may not have realized they were helping them so we’re just asking them to come forward.”

The past week has generated more than 120 tips, Courchaine said.

“As soon as we can confirm that one of them is accurate or something we need to tell you, we are going to tell you,” she said. “It’s in our best interest. We need the public’s help.”

The RCMP also addressed the presence of online rumours as the manhunt continues.

“The spreading of false information in communities across Manitoba has created fear and panic,” Courchaine said. “Be assured, it is in our best interest to share confirmed facts as soon as possible, both in advancing our investigation and with respect to public safety.”

Goodale also said Friday that extra personnel and technology are being used in the investigation.

Story continues below advertisement
“[The RCMP] have reallocated resources to bring in extra personnel, new technology in the form of drones and otherwise, that are helping with the surveillance and the search,” Goodale said.

“This is an active live operation and the RCMP, in collaboration with other police agencies, are putting in all the necessary resources to make sure that this is resolved as quickly as possible.”

RCMP Cpl. Courchaine has previously told Global News that the size and scope of the area are making the search difficult.

“We do have lots of resources, not just from Manitoba but from outside from other provinces,” she said Friday. “Obviously, it’s tough terrain. Our officers are searching kilometres into dense forest, muskeg and all that so it is tough.”

In an interview Friday with Global News Radio, B.C. RCMP spokesperson Cpl. Chris Manseau said information from the public “has been really instrumental” in the search.

He also added that the two men, while last spotted in Manitoba, “could be just about anywhere.”

“So we want all Canadians to remain vigilant, keep an eye open,” he said.

While charges have yet to be laid in the deaths of Fowler and Deese, Manseau said investigators are working on getting those charges approved.

“We’re working very hard to get those and we expect those in the future,” he said.

WATCH: How the RCMP determined recent photo of Kam McLeod was a fake

Schmegelsky’s father, who has spoken extensively to the media, says he doesn’t believe his son was a Nazi sympathizer despite reportedly sending photos of a swastika armband and a Hitler youth knife to an online friend.

Alan Schmegelsky, Bryer’s father, states that he believes his son simply thought the memorabilia was “cool” but that “he thought he was Russian.”

He said on Thursday that his son took him to an army surplus store about eight months ago in Port Alberni, B.C., where the teen was excited about the Nazi items.

“I was disgusted and dragged him out,” Alan said. “My grandparents fled Ukraine with three small children during the Second World War.”

Alan went on to say that he didn’t see his son between the ages of eight and 16 and that, during that time, the young man mistakenly began to believe that he had Russian heritage and enjoyed watching Russian rap videos. He is also a supporter of Russian President Vladimir Putin and U.S. President Donald Trump, he continued.

On July 18, McLeod and Bryer Schmegelsky were reported to have stopped at the Cassiar Mountain Jade store north of Dease Lake for free coffee that the shop hands out to motorists. Someone at the location recognized the suspects and their red truck and called police. The two young men were not suspects at the time.

The Cold Lake RCMP said Friday that the pair were spotted in the community at about 9:30 a.m. on July 21.

RCMP said a resident saw a Toyota Rav-4 stuck on a trail behind their home and two young men were seen outside the vehicle.

“The resident assisted the pair in getting unstuck and they continued on their way after a short, unremarkable interaction,” the RCMP said.

“Later that evening, the resident was on social media where he identified the pair as Bryer Schmegelsky and Kam McLeod.”

Fowler and Deese were last seen alive on security footage at a gas stop in Fort Nelson, B.C., on July 13.

The couple was filling up Fowler’s blue van. The victims’ families told Global News that they were on a road trip through Canada and that Fowler had been living in B.C. for work.

2:28 B.C. murder suspects still believed to be in Manitoba

Two days later, the couple was found dead just outside Liard Hot Springs. B.C. police said the couple was shot and that the rearview mirror of their van was broken.

McLeod and Schmegelsky’s truck was found burned out on Highway 37, 50 kilometres south of Dease Lake. The body of Dyck was found two kilometres from the truck.

Police initially treated the young men as missing but announced they were suspects after they were spotted in northern Saskatchewan. The manhunt stretched into northern Manitoba this week when a burned-out car in which the young men were travelling was found near the community of Gillam. The pair was identified as murder suspects by police on July 21 and were described by RCMP as “armed and extremely dangerous.”

READ MORE: Northern B.C. murders: A timeline of what happened and where

Alan Schmegelsky has said he doesn’t believe his son will survive a confrontation with police.

“He’s on a suicide mission. He wants his pain to end,” he said, breaking down in tears. “Basically, he’s going to be dead today or tomorrow. I know that. Rest in peace, Bryer. I love you. I’m so sorry all this had to happen.”

The suspect’s father continued: “He wants his hurt to end. They’re going to go out in a blaze of glory. Trust me on this. That’s what they’re going to do.”

The family of Dyck said in a statement that they are “truly heartbroken by the sudden and tragic loss of Len.”

“He was a loving husband and father. His death has created unthinkable grief and we are struggling to understand what has happened.”

This is a developing story and will be updated as more information becomes available.

— With files from Sean Boynton, Elisha Dacey, Maham Abedi and the Canadian Press