The Toronto Star and a Halifax artist are being criticized over the publication of an editorial cartoon depicting Tourism, Culture and Sport Minister Lisa MacLeod.

Published in Monday’s edition of the paper, the cartoon shows MacLeod in a straitjacket being held by two men in white hospital scrubs with the caption: “Yes, Ms. MacLeod, we know who you are.”

MacLeod has said previously that she has struggled with mental health issues.

The drawing comes after MacLeod was in the news due to vulgar language she reportedly directed towards Ottawa Senators owner Eugene Melnyk at a Rolling Stones concert near Barrie over the Canada Day long weekend. At the event, MacLeod reportedly pushed through the crowd and confronted Melnyk, saying: “I am your minister, and you’re a f–king piece of s–t and you’re a f–king loser.”

“I probably would have changed things a bit … I had a crazy week. I didn’t do my homework; that will not happen again. I will be fluent in all the on-goings of Ontario politics in the future,” de Adder said. 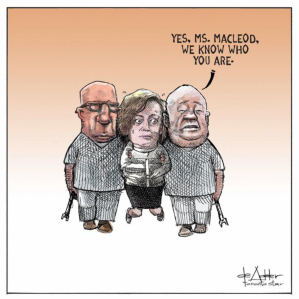 De Adder is the same artist who last week tweeted a graphic cartoon of a father and daughter who died trying to cross the U.S. border. In the drawing, U.S. President Donald Trump is seen in golf attire, asking: “Do you mind if I play through?”

The cartoon went viral on social media and drew the attention of American media. De Adder claims he lost work at Halifax newspapers as a result of his tweet.

When asked if he was trying to drum up publicity by publishing polarizing images, de Adder said: “My ideal situation is not to start a job with instant controversy. That makes no sense. How is that helping my cause?”

The artist added: “I think it should stimulate or capture the emotions of the day. It should make people think. Give people a laugh. An editorial cartoon isn’t just one thing; it’s many things.” 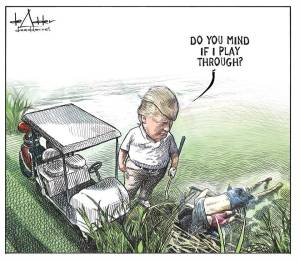 I am one of Lisa McLeod's toughest critics, but today's Star cartoon crosses the line.

It's unacceptable to make fun of people around mental health issues.@MacLeodLisa @TorontoStar #ONPoli

In a letter to the Toronto Star, Camille Quenneville, CEO of the Canadian Mental Health Association’s Ontario division, wrote: “The cartoon depicting the Hon. Lisa MacLeod in a straitjacket is heartbreaking and demoralizing for all of those suffering and the people supporting them. I cannot imagine the Star printing a cartoon maligning a cancer patient.”

“I couldn’t agree with @CamilleQu more. At a time when we’ve made so much progress in destigmatizing mental health challenges, the @TorontoStar‘s cartoon is harmful and runs contrary to our goal of supporting Ontarians in their journey to mental wellness,” Elliott wrote.

I couldn't agree with @CamilleQu more. At a time when we've made so much progress in destigmatizing mental health challenges, the @TorontoStar's cartoon is harmful and runs contrary to our goal of supporting Ontarians in their journey to mental wellness. https://t.co/kpeNlcVTLe

MacLeod declined to comment when asked about the controversy on Tuesday.

As of publication, Global News has reached out to the Toronto Star for comment but has not yet received a response.