Edmonton police to release names of homicide victims ‘in most cases’

The Edmonton Police Service has released its new policy when it comes to publicly naming homicide victims.

In a report released Thursday afternoon, the EPS said the names of homicide victims will now be released in most cases. The new policy comes after research found the information is “clearly within the public interest” as per Freedom of Information and Protection of Privacy legislation.

“We got a group — independent — to come in and look at it. I think we got to a good place,” Edmonton Police Chief Dale McFee said.

The new policy states the EPS will release the name of a homicide victim after an autopsy has been performed, as long as the following criteria is met:

Police added that allowing time for the autopsy to be performed — which can take one to three days — will also give the victim’s family time to process what’s happened and what to expect when their family member’s name is released.

“We’re trying to balance, obviously, all the interests,” McFee said. “We’re obviously trying to protect victims and victims’ families but at the same time, the right to know and making sure stories are heard. I think we’ve got to a good place that’s consistent.”

Watch below: In December 2018, Edmonton’s incoming police chief Dale McFee spoke about why police haven’t always released the names of the victims in homicide cases

Early in 2017, Edmonton police stopped naming homicide victims unless there was an investigative reason to do so. The EPS said it adopted framework from the Alberta Association of Chiefs of Police that dictated unless certain criteria was met, the names would not be released because the privacy of the victim and their family outweighed the public interest in the homicide.

That practice was criticized, and one of the first things on McFee’s to-do list when he became chief was to review the policy.

Earlier this year, a review was conducted by the Community Safety Knowledge Alliance, which found that while this is a divisive issue, a middle ground could be found.

Under the new policy, the EPS said circumstances where police may not release a victim’s name include investigations where the victim was a child or the homicide was a murder-suicide.

“But I can say, this day forward, that we’re going to release as the default and exceptional circumstances, I think, we have to explain ourselves.” 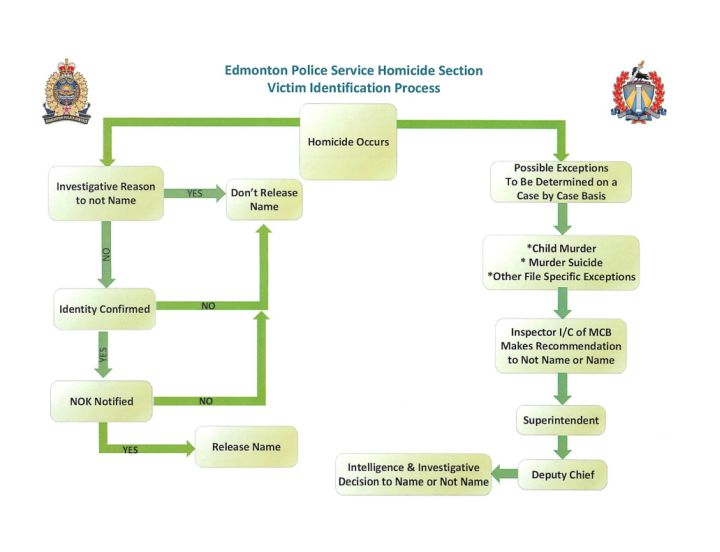 If there is a circumstance where police believe the victim’s name should be withheld, the EPS said the inspector of the Major Crimes Branch will advise the superintendent of the reasoning behind the decision. The superintendent will then notify the deputy chief of intelligence and investigations, who will make the final decision.