Ottawa and the provinces made $186 million from various taxes on cannabis from last October through the end of March, numbers released Wednesday show.

The provinces took the lion’s share of that money, with $132 million in combined sales tax and excise tax revenue; the federal treasury took in $55 million.

“It’s a tradeoff — the more you increase taxes the more revenue you get, but that increases prices and makes you less competitive with the black market.”

LISTEN BELOW: Brock University professor Michael Armstrong joins the 630 CHED Afternoon News to talk about the money being brought in by cannabis taxes

Armstrong points to California, where legal cannabis is heavily taxed, and where legal sellers can’t make headway against a broadly tolerated grey market. The state is making far less money than expected from taxing cannabis.

“Where they do have legal retail, there are lots of taxes that have been piled up — every level of government has tacked on a tax. That makes it really difficult because the legal retailers can’t compete with the black market.”

“Somebody who wants to buy cannabis doesn’t have to hunt very far to find an illegal shop or delivery service. They can offer a much lower price than the legal retailer.”

From well before legalization, Canadian governments prioritized eliminating the illegal market, accepting that that means leaving at least some money on the table.

WATCH: The feds have reached a deal with the provinces on marijuana tax revenue. As David Akin reports, it would see provinces get a bigger share of the pot pie.

“My approach is to make sure that the taxation of cannabis is consistent with the goal of keeping cannabis out of the hands of kids and out of the black market,” federal Finance Minister Bill Morneau told the House of Commons last February. “That means keeping the taxes low so we can actually get rid of the criminals in the system.”

Nonetheless, legal weed is more expensive: Canadians pay about $10 a gram to legal sources and an average of $6.37 a gram for a grey-market product, as best Statistics Canada can make out from citizen-submitted reports.

Colorado, where recreational weed has been legal since 2014, has raised US$1 billion ($1.34 billion) in cannabis taxes since legalization. (However, Colorado is largely by states where recreational cannabis is illegal, so it’s not clear whether that number could be used for forecasts in Canada.)

WATCH: The biggest takeaways for everyday Canadians from the 2018 federal budget

Canadian governments have miscalculated sin taxes before. In the 1980s, stiff tax increases for cigarettes accidentally set off an economics experiment as smokers turned to much cheaper black-market smokes. By the mid-1990s, they admitted defeat and cut tobacco taxes.

Armstrong thinks that governments might be able to raise taxes once the legal market gets its feet under it.

“That’s one of the suggestions that have come off people who have studied the American example — that you probably want to start off with a very low level of taxation, let the legal industry get established, capture the majority of the market and then you can start to think about raising taxes to generate revenue for the government for social services and all those other things.”

StatsCan added that excise taxes increased by 12.4 per cent in the first quarter of 2019 compared with the fourth quarter of 2018 on higher sales by licensed producers to distributors.

The Conference Board of Canada’s economist Robyn Gibbard says these first-ever government tax figures are lower than expected, in part due to the “bumpy” rollout of legalization last fall, but governments can expect strong growth in revenues going forward. 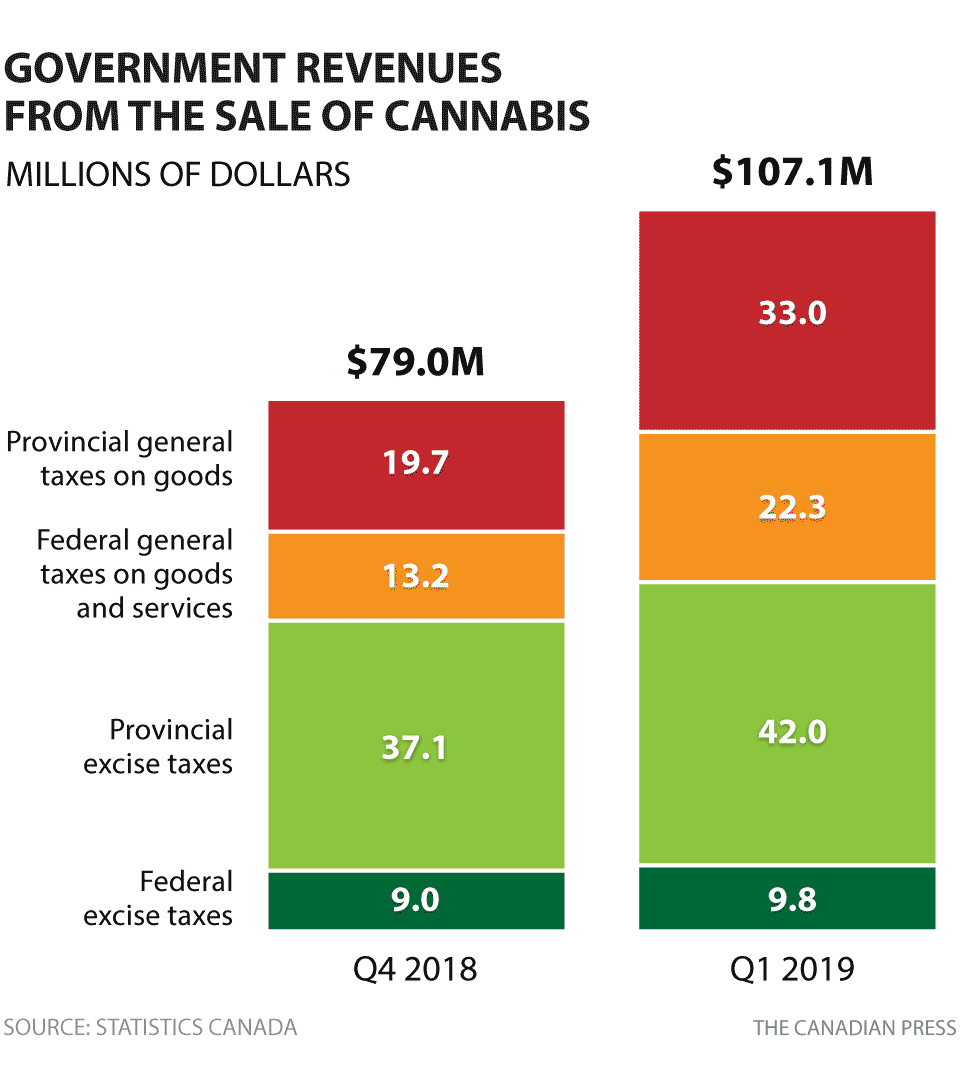