A North Vancouver business owner is trying to keep up with the Kardashians, claiming a business co-founded by one of the celebrity sisters pilfered her intellectual property.

Tamara Komuniecki owns a boutique in North Vancouver’s Edgemont Village called the Delish General Store, and also markets clothing under the brand “Strong as a Mother.”

Last week, that exact slogan showed up on the website and Instagram account of Khloe Kardashian’s Good American clothing company, among a line of mom-themed apparel.

“Friday morning, the girl that helps me with social media sent me a link and said, ‘Uh-oh Tam, you better see this,'” said Komuniecki.

Komuniecki’s Strong as a Mother shirts feature the slogan in block letters, with sweatshirts retailing for $75 and T-shirts selling for $36.

Good American’s shirts feature the slogan in a cursive font, with T-shirts selling for $77.

Komuniecki owns the trademark for the slogan in Canada. But because there is a U.S. brand with the similar name, “Strong Like a Mother,” she said her lawyers told her she would likely be unable to acquire the rights south of the border.

She says she’s dealt with copycats before, but they have tended to be other small creators who she’s been able to convince to pull the items down through a personal appeal.

“There’s quite a few knockoffs that come out every week, but never did I think there would be one associated with the Kardashian family. So I knew immediately this was going to be trouble for my brand,” she said.

Komuniecki said it’s taken her two years of work to build up her brand, a hard climb she said involved sacrificing time with her family to accomplish.

She said now she’s appealing to Good American and the Kardashians’ better nature, hoping they will pull the design down.

Every Mama deserves to be spoiled in style 💗Celebrate the mothers you admire most with limited-edition tees, receive by Mother's Day when you select 2 day shipping at checkout on goodamerican.com #goodsquad #goodamerican

Komuniecki isn’t the only one hoping the U.S. brand will take action. Comments posted to Good American’s Instagram account attacked the brand for allegedly stealing the design.

“Not surprised you ripped off someone else’s idea, true Kardashian style,” wrote one commenter.

“Somewhere in Canada is a mother who created this brand and struggling to keep her small biz alive because rich fakers like the Kardashians want to rip them to make a buck they don’t need,” wrote another.

“Why don’t you donate your proceeds to her or to a charity [of] her choice do the right thing as a MOTHER.” 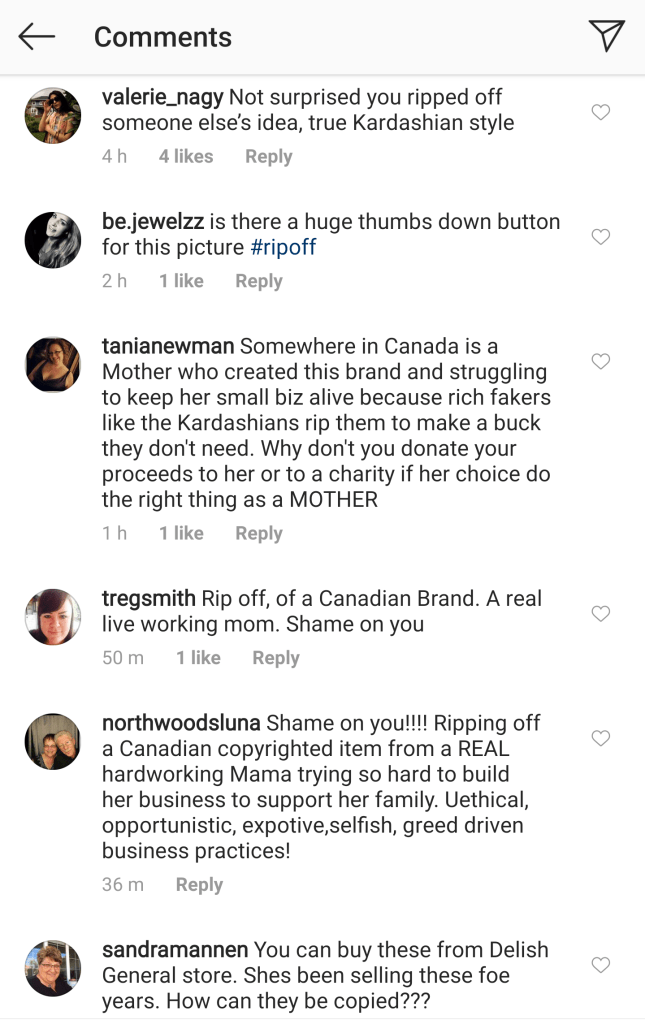 It is not the first time the Kardashian clan has faced controversy over their products.

In 2017, Kendall and Kylie Jenner were forced to pull a line of T-shirts featuring images of their faces along with album artwork from rock groups like Metallica, Pink Floyd, Kiss, The Doors, Led Zeppelin and images of late rappers Tupac Shakur and Notorious B.I.G.

Kylie faced another copyright infringement lawsuit the same year, after allegedly copying artwork for a promo for her Life of Kylie series.