Canada’s recycling industry is on life-support. Here’s how to fix it

This is Part 3 in a three-part series investigating the state of Canada’s recycling industry. Read Part 1 and Part 2 of the series here.

At the Merlin Plastics plant in Delta, B.C., beads of reflective, grey plastic bounce along a processing line.

What was once a detergent bottle has been washed, ground down and reduced to pellets so that it can be sold to create new bottles.

This is the future of recycling.

Anyone in B.C. who makes a product, sells a product or imports a product that’s collected in a blue bin has to pay to recycle its packaging. The province is the only jurisdiction in North America that is both funding and managing its entire recycling system — instead of leaving that responsibility to municipalities and their taxpayers.

The model is called “extended producer responsibility,” or EPR, and it’s regulated under a provincial law that came into force in B.C. in 2014.

“EPR is really about saying, ‘You made this, you’re responsible for it at its end of life,’” explained Usman Valiante, a senior environmental policy analyst with Cardwell Grove.

“You chose the raw materials to use in your product or packaging … Now, we want you to take the responsibility that once the consumer’s done with that soft drink bottle or that potato chip bag, that you set up a system to take responsibility to pull that stuff back from consumers… So you might then take that material yourself and put it back into the next cycle of soft drink bottles or potato chip bags,” Valiante said.

In this new recycling ecosystem, nearly 1,300 companies — including Apple Canada, Boston Pizza, Procter & Gamble and Loblaw — have come together to form a non-profit organization called Recycle BC, which carries out residential recycling in the province.

And the success is evident.

At 69 per cent, B.C.’s recycling rate is the highest recorded in the country. Recycle BC is accepting more items in its blue bins while other municipalities in Canada are cutting down, and it has dedicated plants that take products like shopping bags and berry and pastry containers, which recyclers in other parts of the country have stopped accepting or are paying to get rid of.

In 2018, China banned much of the world’s recycling, sending the global industry into turmoil. But according to the chair of Recycle BC, John Coyne, the impact was “moderate to minimal” in B.C.

Under B.C.’s Environmental Management Act, producers have to recover 75 per cent of the paper and packaging they produce. That target increases as the government reviews the plan every five years, and producers face fines if they don’t reach it — although, they haven’t missed it yet.

The ultimate goal of the EPR model is for producers who currently make packaging that can’t be recycled to change its design into something that is.

“So it may be to say … ‘This product doesn’t make sense the way that it is currently, and so we should move to a different design,’” said Peter Hargreave, president of the waste management consulting firm Policy Integrity.

Coffee giant Keurig, a member of Recycle BC, wanted to change its pods from a plastic that wasn’t recyclable to one that was and, in 2016, started testing a new version at a plastics plant where Recycle BC contracts its processing. Today, Keurig’s new pod is recycled across the province.

But the widespread elimination of non-recyclable packaging isn’t happening yet.

That’s because B.C. alone represents such a tiny fraction of the global market that instead of being pushed to modify their packaging, many companies simply shrug off the extra cost and chalk it up to the price of doing business in B.C.

“Until we actually complete the puzzle and we know everybody’s got EPR programs in place and all of those systems are functioning in a broadly similar fashion, you haven’t really completed the picture yet,” said Coyne, who, in addition to serving as chair of Recycle BC, is a vice-president and the general counsel of Unilever Canada, whose parent company is responsible for 400 brands from Lipton to Vaseline to Breyers.

Even that new Keurig pod — now recyclable in B.C. — isn’t being recycled in all of Canada.

That’s because full producer responsibility doesn’t exist in the rest of the country. Some provinces require producers to pay for part of their recycling, but none outside of B.C. are required to manage the actual system. As a result, there is no agreement from city to city, let alone province to province, about what’s accepted in the blue bin and what’s ultimately recycled. 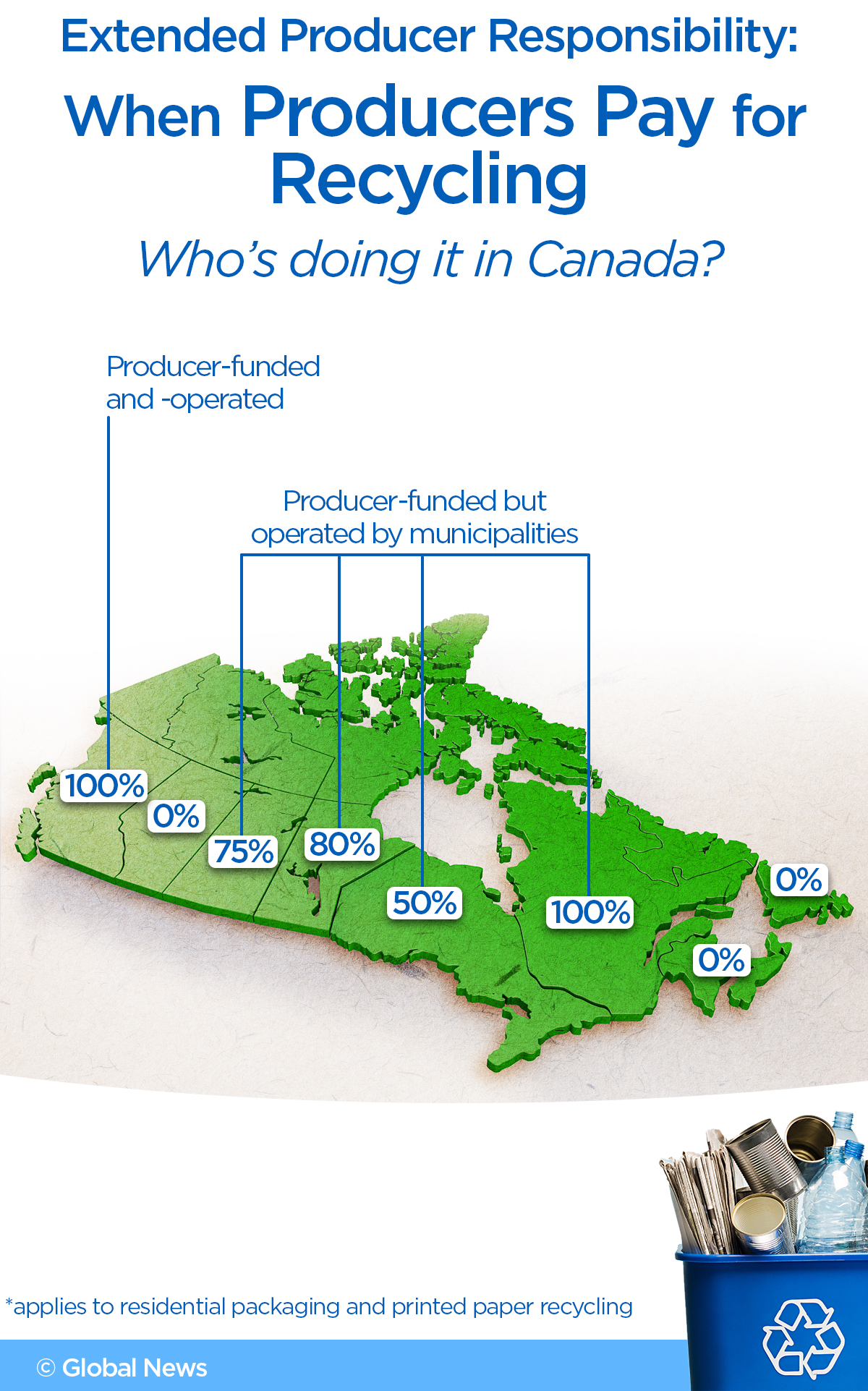 In Ontario, where producers are required to pay for 50 per cent of the recycling system, municipalities are calling for the EPR model to be fully adopted by the provincial government and made into law. The Ontario Ministry of the Environment has previously signalled it is moving in that direction and could get there by 2023.

“If a province the size of Ontario moves forward with full EPR in conjunction with a number of the other provinces within the country, I think we will likely see some changes within our products,” said Matt Keliher, general manager of solid waste management services for the City of Toronto.

Demong has rallied 28 Alberta municipalities to push their provincial government to adopt a full producer responsibility model as well.

But in Europe, where EPR has existed in varying forms as far back as 1990, it hasn’t solved all of the recycling industry’s woes. That’s why the EU approved a law this past March banning 10 types of single-use plastics by 2021.

It’s similar to what MP Nathan Cullen wants to do in Canada.

“This is ending up in a landfill,” said the NDP MP, waving a black plastic coffee cup lid. “It doesn’t matter whether you put it in the blue box or not. They can’t recycle it.”

Cullen introduced a private member’s bill last February to ban any packaging that can’t be recycled or composted in Canada.

“Some manufacturers will say, ‘Well, technically our products can all be recycled’ … Well, ‘technically’ doesn’t cut it. It’s got to practically be something that, when I put it in the blue box, it ends up turning into something else,” Cullen said.

But in order for his bill to pass, Cullen will need the support of the Liberal government, and Environment Minister Catherine McKenna would only say she supports the bill “in principle.”

The other bold measure industry experts say could shift the recycling paradigm is if governments in Canada mandated packaging contain a certain percentage of recycled content.

“It could spur the recycling industry back to life,” said Keliher with the City of Toronto.

“It would create a market for the materials, right now, that don’t have a market.”

The law has meant there are now buyers for the recycled plastics processed by plants like EFS-plastics outside of Stratford, Ont.

“Seventy per cent of our customers are supplying the California marketplace, and that’s from our facilities in both Ontario and Pennsylvania,” said Eadaoin Quinn, director of business development and procurement with EFS-plastics.

EFS gets multiple calls a week from municipalities and recyclers across North America looking for someone to take their plastic film — things like plastic bags — but the company is consistently turning them away because it’s already processing at capacity.

“If another area were to enact legislation similar to California, that would be the exact signal that we and our competitors need in order to invest in additional infrastructure,” Quinn added.

READ MORE: The losing economics of recycling — Canada’s green industry is deep in the red

Just two weeks ago, EFS-plastics and 11 other co-signatories sent a letter to Canadian governments asking them to create new laws requiring garbage bags and plastic carry-out bags contain 20 per cent recycled content by 2025.

These plastics, according to the letter, “are at the greatest risk of being landfilled or incinerated.”

Any jurisdiction could adopt such a law. Instead, there’s a lot of finger-pointing.

Ontario’s Ministry of the Environment claims it’s up to the federal government to legislate recycled content, arguing national standards are more effective than each province acting alone.

No matter who takes the lead, if recycling is to survive, someone’s got to blink.

—With files from Christian D’Avino