Justin Bieber is lashing out at Nightly Pop host Morgan Stewart for accusing him of lip-synching during his Coachella performance.

Bieber surprised the crowd during the closing night of the annual Coachella festival when he joined Ariana Grande onstage. The Canadian singer sang his 2015 hit song Sorry and said, “Album coming soon,” before leaving the stage.

The Nightly Pop host said Monday that “for two long years fans have waited to hear Bieber sing again onstage and last night, he sounded better than he ever has.”

“NO! WOAH! OK, poor song started before him. I didn’t realize it was going to be that bad,” Stewart yelled.

“He definitely looks like he put an Oxypad on that forehead but I don’t care that was f**ed up!” Stewart yelled again about the lip-synching.

The Baby singer took to Twitter to encourage Stewart to use her platform differently.

“@Morgan_Stewart just saw a video of you ripping me to shreds saying I was lip-syncing. They played the song and i just sang overtop of it… regardless why spend your time tearing people down. It’s People like you that are bullies at school that are making kids suicidal,” Bieber tweeted at the E! host. 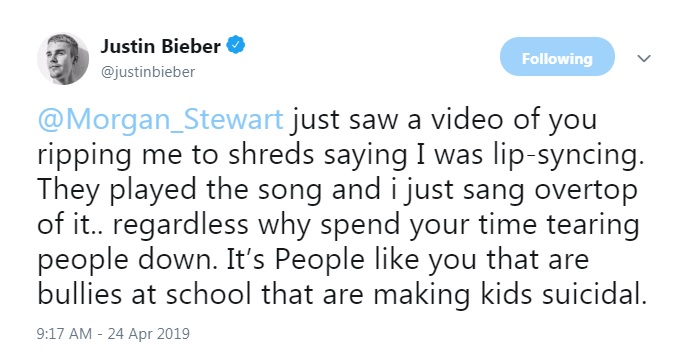 He sent Stewart a followup tweet, saying: “@Morgan_Stewart imagine if you spent even half the time you spend laughing at other peoples expense actually building people up and encouraging people how much positivity you could bring. What hurts about this is the fact that you have a platform to make a difference.”

The Sorry singer continued: “And rather than being positive you belittle people. Think about how awesome it felt for me to be on that stage after being away for so long the excitement and joy it gave me doing the thing i love the most, i sang to the backtrack like most cameos do this is a normal thing.”

“And rather than try and make people feel accepted and loved you find things to pick apart like the world isn’t full of that already.. we can find something negative to say about anything or anyone,” Bieber wrote.

“When are we gonna be the kind of people that find joy in adding value to one another and not tearing each other apart..” the 25-year-old singer concluded. 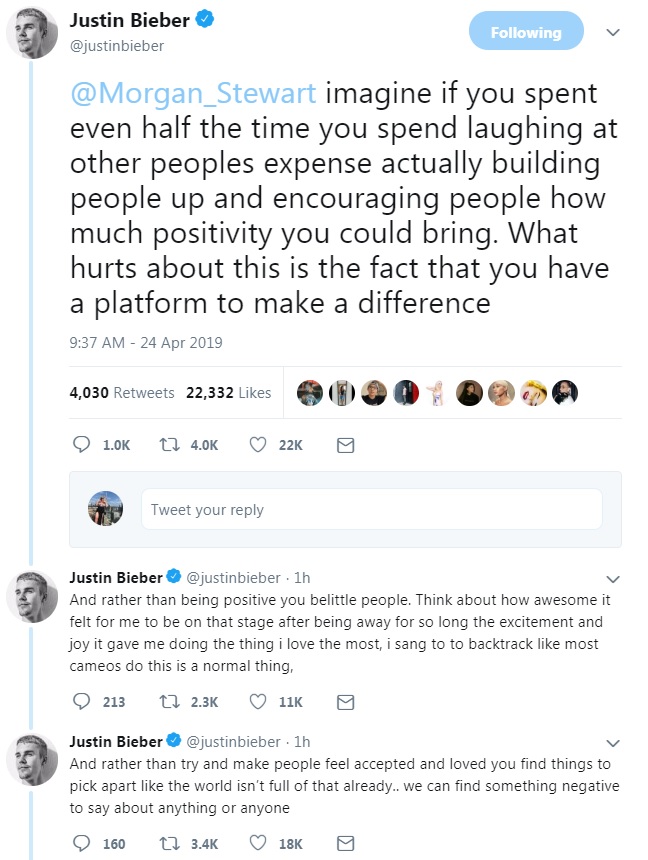 Morgan has not yet responded to Bieber’s tweets as of this writing.