ANALYSIS: Near-record ‘incumbency disadvantage’ is yet another headache for Jagmeet Singh’s NDP

Despite a bevy of recent polls that show Liberal support is leaking in the wake of the SNC-Lavalin matter, nervous Grits can look to how incumbent governments have fared in every general election since 1867.

Not counting the first general election — the only one, of course, in which there was no incumbent — the party that entered the campaign as the government held on to power after the ballots were counted 26 out of 41 times, a re-election rate of 63 per cent.

Political scientists describe the increased odds of winning elections if you’ve already won one as the “incumbency advantage” and there have been several studies in Canada and worldwide which have measured and validated this effect.

And while there is no consensus on how big or significant this advantage is, there is fairly broad agreement among both academics as well as practicing political operatives that, given the choice, you’d rather be an incumbent than a challenger.

Which brings us to Canada’s New Democratic Party.

Already facing many other challenges compared to its main rivals the Liberals and the Conservatives, the NDP is facing a steep “incumbency disadvantage” that could further hobble leader Jagmeet Singh’s attempts to make a difference in this fall’s election. 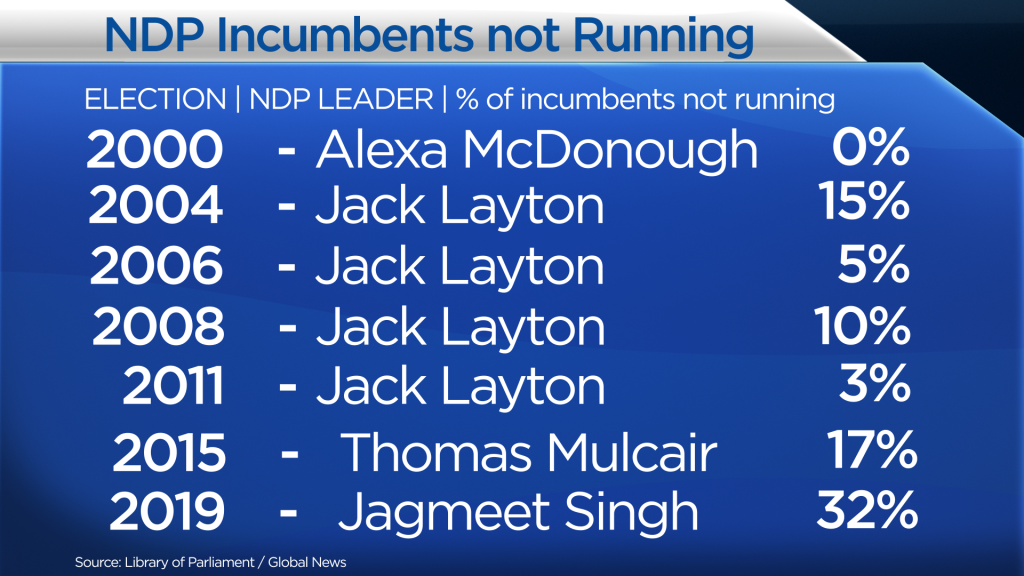 A whopping 32 per cent of New Democrats elected in 2015 will not be on the ballot in support of leader Jagmeet Singh this fall. (And it could be slightly higher: Two-term NDP MP Christine Moore has said she will not decide if she’s running again until after she gives birth later this spring.)

As an NDP strategist, Robin McLachlan, a vice-president at Ottawa-based consultancy Summa Strategies, concedes that losing a lot of incumbents, including veterans like B.C.’s Nathan Cullen, Edmonton’s Linda Duncan, or Hamilton, Ont.’s David Christopherson, will be a challenge.

“But any political strategist is going to say that any challenge is an opportunity and that’s what this has to be for the NDP — to go out and find who’s the next generation and who are we communicating to perhaps a little bit more strongly now,” McLachlan said.

By comparison, just 12 Liberal MPs, or seven per cent, will not follow Justin Trudeau into battle again and only slightly fewer Conservative MPs — 12 per cent — will not run again this fall in support of their leader Andrew Scheer.

Those numbers are based on interviews with MPs themselves, press releases, and data provided by each party.

Library of Parliament data going all the way back to 1945 shows that, on average, in any general election, about 12 per cent of incumbents do not run. The Global News estimate for the upcoming 2019 election is that about 11 per cent of the 338 MPs who won in 2015 (or in intervening byelections) will not stand again.

But the NDP’s incumbency disadvantage — 32 per cent of incumbents not running — is off the charts for any one party, at least according to Library of Parliament data going back to the 2000 general election.

In the last 20 years, no party has ever had more than 20 per cent of its incumbents decline to stand for re-election. That, as it turns out, was the Conservatives in the 2015 election. Interestingly, the NDP in 2015 also had its highest rate of incumbents not running: 17 per cent who won with Jack Layton in 2011 did not run under Thomas Mulcair’s banner.

A Bloomberg News analysis of party incumbency rates, published in 2015 and which examined data going back to 1945, found only one instance of a party losing more incumbents than Singh and the NDP have this year. That was in 1993 when, according to Bloomberg, 40.8 per cent of Progressive Conservatives elected on Brian Mulroney’s ticket in 1988 opted not to run for Kim Campbell. The PCs, of course, got crushed in that campaign by Jean Chretien’s Liberals and would win just two seats.

That 1993 election, just like the 2015 election, was one of those rare “change elections” and so, being an incumbent for the governing party may not have counted for much. And yet, though Justin Trudeau’s Liberals were the clear beneficiaries of the electorate’s desire for change in 2015, the Liberals may have been benefited from the fact that both the Conservatives and the NDP in that election were at 20-year highs when it comes to rates of incumbents not seeking re-election.

WATCH: Can the NDP make inroads in Quebec?

The NDP’s competitors will almost certainly put resources and energy into NDP ridings where incumbents have left, if only because the job of stealing a riding from another party is made easier when no incumbent is there to defend it.

Expect, for example, the Bloc Quebecois will be licking its lips at the prospect of picking up the Montreal riding of Laurier Sainte-Marie, the riding long-held by former BQ leader Gilles Duceppe until New Democrat Helen Laverdiere snatched it away when the Orange Wave rolled across Quebec in 2011. Laverdiere, though, is not running this fall.

New Democrat Fin Donnelly had held the British Columbia riding of Port Moody—Coquitlam since 2009 but is not running this year. That’s a riding the Conservatives can expect to be eyeing, in a part of the Lower Mainland where both Conservative and, before that, Canadian Alliance candidates had some electoral success.

Or think about the riding of Victoria. New Democrat Murray Rankin narrowly squeaked by the Green Party when he first came to the Commons in a 2012 byelection. And now that he’s retiring, the Greens, whose leader Elizabeth May holds the riding right next door, will surely have much higher hopes to win this seat this fall than they would have had Rankin been the incumbent.

One study, published in 2012 in the Canadian Journal of Economics, concluded that, so far as elections for seats in the House of Commons were concerned, “incumbents enjoy a 9.4-11.2% increased probability of winning over non-incumbents.”

WATCH: New poll could be trouble for Trudeau (March 5)

That 2012 paper also concluded that the “incumbency advantage” goes to the candidate and not to the party.

“Our findings suggest … that individual candidates are more important than may have been expected,” wrote paper authors Chad Kendall of the University of British Columbia and Marie Rekkas of Simon Fraser University.

“The incumbent advantage is largely name recognition and organization,” said Jason Roy, an associate professor in the department of political science at Wilfrid Laurier University in Waterloo, Ont.  Roy co-authored a paper published in 2014 that described an experiment in which authors tried to quantify the electoral advantage a “star candidate” has in an election and found an advantage that was worth up to 10 percentage points.

Story continues below advertisement
“That was in an experimental setting but the challenge, of course, is that in that setting, everything else is controlled,” Roy said. “So, on average, you can say, yeah, there is a boost for a star candidate which I suspect would be true for the most part with an incumbent but [a lot] of other factors really matter that can wipe out that advantage quite quickly.”

Roy’s 2014 paper, co-authored with Western University associate professor of political science Chris Alcantra, did find that voters with weak partisan ties — the “leaners” in any election who could be persuaded to vote one way or the other — were most susceptible to voting for a strong local candidate which, for their study, was a strong “star” candidate. Roy and Alcantra estimated that the odds of a “leaner” voter choosing a strong local candidate increased by nearly 40 percentage points versus a generic candidate.

Thank you to everyone from Thunder Bay —Rainy River for your support over the last 3 years. It has been an honour being your MP, and I look forward to continuing to serve you all for the remainder of my mandate. pic.twitter.com/ZaBndpHn8J

In a close race or a race in which there are three or four parties who may all be expected to get a significant portion of the vote, such an advantage with ‘leaners’ could be a big advantage. Conversely, if a party fails to attract star candidates — or loses strong incumbents — that advantage disappears or may shift to another party who can field a stronger local candidate. That, in a nutshell, is the NDP’s “incumbency disadvantage” in this election.

All of that said, one of the factors that mitigate this incumbency advantage or the star candidate advantage is something political scientists have described as “the leader effect,” the notion that the local candidate has come to matter less and less over the last several elections. That may be a function of a changing media environment. In any event, some political scientists and political pollsters believe this means a candidate’s fate hinges increasingly more on the leader and the leader’s performance during a campaign.

“I think that’s the advantage that Jagmeet Singh has,” said McLachlan, the NDP strategist. “He has to build his own brand as a leader and he needs to captivate the audience of progressive Canadians and he’s going to do that by presenting a vision that demonstrates that Justin Trudeau isn’t the same guy that he campaigned like in 2015.”