The Transportation Safety Board says an Alberta pilot flew into deteriorating weather before his small plane crashed in southeastern British Columbia, killing him and his girlfriend.

The board released its investigation report Wednesday on the aircraft that vanished in November 2017 and was not found until the wreckage was spotted in September 2018 near Revelstoke, B.C.

RCMP identified the remains found at the crash site as those of 28-year-old Dominic Neron and his 31-year-old girlfriend Ashley Bourgeault.

The safety board said in its report that the couple departed from Penticton Airport on Nov. 25, 2017, for a so-called visual flight rules (VFR) journey to the Villeneuve Airport near Edmonton.

The regulations allow pilots to operate aircraft in weather clear enough to see where they are going, with strict requirements for visibility and cloud cover.

At the time of the crash, the pilot did not hold a night rating or an instrument rating, which would qualify him to fly through clouds and poor weather.

The board says the weather for the flight was deteriorating and the plane was flying over a mountainous region before it struck forested terrain in a steep, nose-down position.

“Flying in deteriorating weather conditions is challenging; the associated risks need to be managed properly before and during flight, especially when flying over mountainous terrain,” the report says.

Records indicate the pilot was certified and qualified in accordance with regulations, held a private pilot licence and had logged more than 122 flight hours, the report says.

But he had not updated his personal pilot logbook since May 28, 2017 and the aircraft’s journey logbook was not recovered, so investigators were unable to determine the pilot’s exact number of flight hours at the time of the crash. 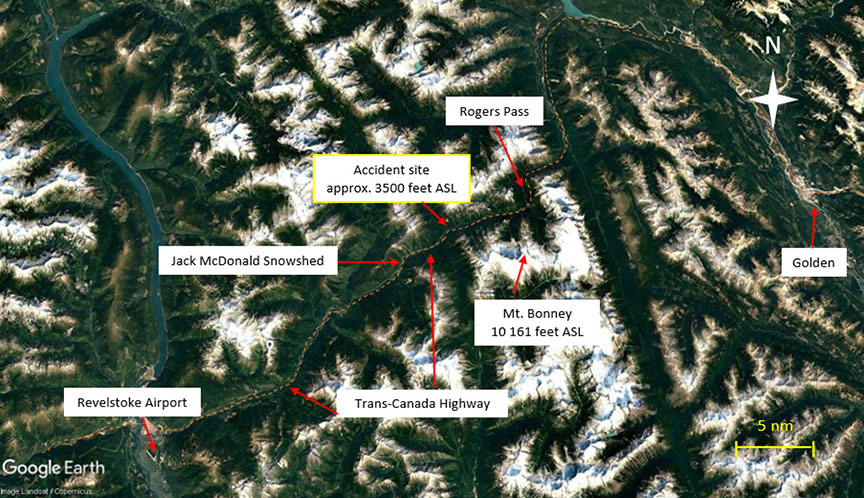 The TSB report says the flight path followed a known visual flight rules route along the Trans-Canada Highway from Revelstoke toward Rogers Pass.

READ MORE: ‘I know in my heart that my sister is alive’: sister of missing Edmonton mom prays downed plane will be located soon

But it says a Transport Canada manual cautions that the use of marked routes does not absolve pilots from proper pre-flight planning or exercising good practices in the air.

“Alternative unmarked routes are always available, the choice of a suitable route for intended flight and conditions remains the sole responsibility of the pilot-in-command,” the manual says.

The investigation was unable to determine if the pilot had intended to follow the route, because a flight plan wasn’t filed and the pilot didn’t obtain a weather briefing from Nav Canada before departure, the report adds.

The forecast for the eastern part of B.C. on Nov. 25, 2017 was scattered clouds and light rain, it says, but local webcam photos taken near the accident site showed low ceilings, fog and limited visibility.

The board says it has previously issued recommendations on emergency locator transmitters that it is highlighting again in this report.

The recommendations include that Transport Canada establish rigorous survivability requirements for the transmitters, reducing the likelihood that they will be rendered inoperative after a crash.

It also says accidents involving flights that depart under good visibility and continue to a point where pilots lose sight of the ground have a high fatality rate. Between 2000 and 2014, these types of accidents killed 74 people.

Current emergency locator transmitter design standards do not include a requirement for an antenna system that can survive a crash, it says.

“As a result, potentially life-saving search-and-rescue services may be delayed if an ELT antenna is damaged during an accident.”