The 2019 B.C. budget allocates more funding towards disaster response, but the leader of the B.C. Green Party says better policies need to follow suit in the face of climate change.

Budget 2019 includes a wildfire response funding increase from $64 million to $101 million per year “in recognition of increased wildfire activity.” 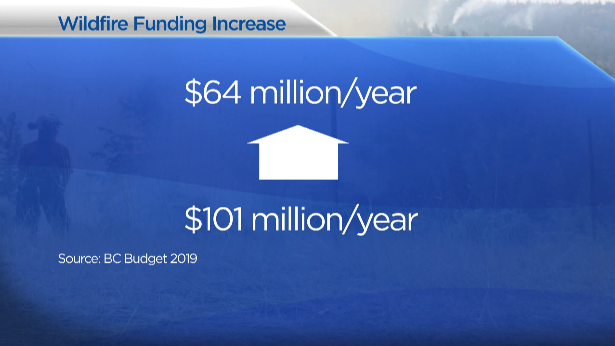 However, the province has spent more than that during every wildfire season since 2011.

“It’s basically the bare minimum that the government is allocating for wildfire response but it’s not enough if fires were as strong as they were in the past,” said UBC Okanagan economics instructor Julien Picault.

While the firefighting budget seems woefully inadequate, Picault said there is more emergency money available in the forecast allowance for unanticipated costs including floods and fires.

“The government cannot predict everything that will happen next year so the government needs to have ways to respond to any problem that could not be foreseen at the same,” Picault said.

Other wildfire-related items in the budget include $13 million over three years to restore forests damaged by disease and wildfire and the distribution of $60 million announced in 2018/19 for fuel management. 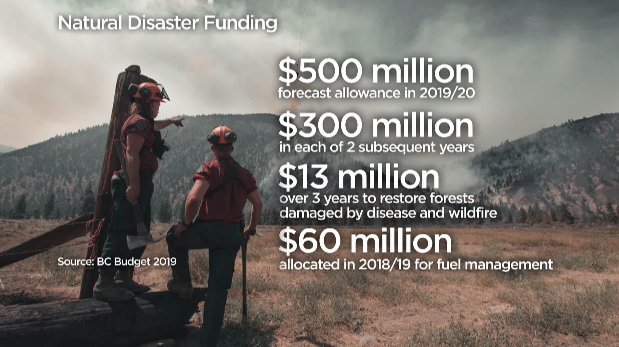 But will it be enough to combat natural disasters that are increasing in severity and frequency?

Last year, the costs of firefighting and emergency programs related to floods and fires were more than $850 million over budget.

Andrew Weaver, the leader of the BC Green Party said the province needs better planning and policies on fire prevention.

“We have been approaching the fire issue as if we’re deer stuck in the headlight, that is doing nothing in preparation and responding after the fact to the burn,” he said on Wednesday.

Weaver said forest management practices should be modernized, such as reducing the use of herbicides on logged forests and putting a price on slash to encourage forest companies to remove the woody debris from the forest floor.

“I’m pleased to see there is some money in the base budget for responding to threats but we need to push on the policy side to retake a look at some of our forest management practices,” he said.

“So we don’t create mono-cultured stands of forest all the same age which, when the age is ripe, can lead to catastrophic forest fires.”

Only time will tell if this year’s wildfire budget will also go up in flames.

According to the Ministry of Finance: