The firefighters were injured while battling the house fire in the 800 block of the affluent Winnipeg street, which started at around 11:30 a.m.

One was taken to hospital. No other injuries were reported.

Deputy Chief Russ Drohomereski said crews originally entered the large single-storey bungalow to fight the fire, but found the floor was too unstable to continue.

“It’s got quite a good hold in the basement, in the structure, it’s a stubborn [fire],” he said Wednesday.

Drohomereski said crews tried to tackle the fire from inside at first and were forced to move outside to a defensive strategy for the safety of the firefighters.

The fire was officially declared under control at 3:55 p.m.

All of the house’s residents were safe and accounted for, but fire crews weren’t able to resuscitate the two dogs. 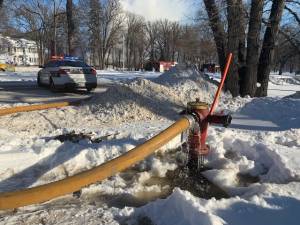 The city said Wednesday afternoon that Wellington Crescent will remain closed to traffic until fire crews are done at the scene.

Water used to fight the fire also covered the roadway, creating icy conditions — drivers are encouraged to use caution.

WFPS crews on scene at a house fire in the 800 block of Wellington Crescent. Traffic is being rerouted, and residents are asked to avoid the area. Individuals with respiratory issues are encouraged to stay indoors to avoid the smoke. pic.twitter.com/rGncgPqojj

-With files from Austin Siragusa and Elisha Dacey