In other words, Canadians owed nearly $1.78 in credit market debt, which includes consumer credit and mortgage and non-mortgage loans, for every dollar of household disposable income in the third quarter. 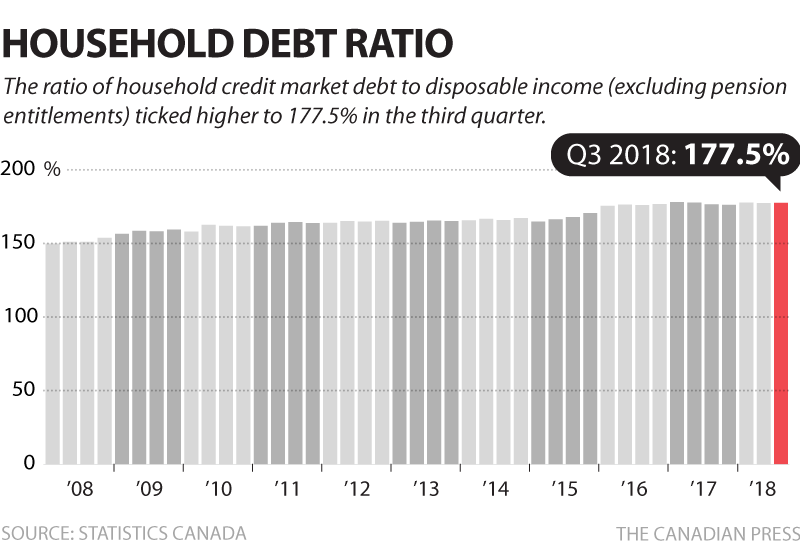 The fact that Canadians aren’t lightening their debt load despite climbing borrowing costs is “concerning,” said the Credit Counselling Society (CCS), a non-profit debt counsellor, in a statement.

READ MORE: Will it crash? Here’s what to expect from the Canadian housing market in 2019

The Bank of Canada has been gradually raising its trend-setting interest rate from 0.5 per cent to 1.75 per cent over the past year and a half. Economists expect the central bank to implement a few more hikes next year.

“Many Canadians may find it difficult to keep up with rising mortgage and other debt payments,” said CSS president Scott Hannah in a press release. “If there is a period of slow economic growth in the future, Canadians could face job losses or decreased income putting them in an even worse position to manage their increasing debt levels.”

Canadians living in Vancouver and Toronto are particularly at risk, according to a report released Thursday by the Canada Mortgage and Housing Corp. (CMHC).

Last year, households owed $2.40 for every dollar of disposable income in Vancouver and $2 in Toronto, the CMHC report showed.

WATCH: How do you consolidate your debt without using home equity?

Looking at the big picture, the StatsCan data showed that total credit market borrowing slowed for the third consecutive quarter as households borrowed $18.3 billion, down from $20.0 billion in the previous quarter. Mortgages posted a third consecutive quarterly decline as they decreased by $1.2 billion. Demand for consumer credit also fell by $500 million, while non-mortgage loans decreased by $100 million.

READ MORE: Here’s how much more Canadians will likely spend on groceries in 2019

The household debt service ratio, measured as total obligated payments of principal and interest as a proportion of disposable income, was 14.5 per cent in the third quarter, relatively unchanged from the previous quarter.