Parents and students were left stunned and shaken after the Lord Selkirk School Division decided to close all schools in the division Monday following threats made on social media Sunday night.

They are not looking for any other suspects, but the investigation is still continuing.

The first threat was made online just after 7 p.m. Sunday targeting one school, which prompted RCMP to make an initial arrest at 10 p.m.

Hours later, another online threat was made by a different person targeting multiple schools in the division which police said was related to the previous one.

“The two friends used his profile to make an additional threat while he was in police custody so right away we were able to identify the other two individuals who were subsequently arrested,” RCMP Sgt. Paul Manaigre said.

LSSD superintendent Michele Polinuk said getting word of the second threat made the decision easy to cancel all classes. 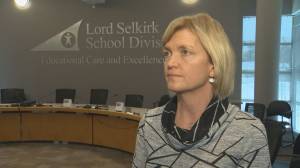 “Because of the nature of the threats, I just felt it was very important to ensure safety no matter what building we have students in today,” said Polinuk.

Crystal Smith, a mother of five students in the division, said after hearing about the threats she was going to keep her kids home no matter what the division decided to do.

“Even if it wasn’t closed, I was going to keep them home, (I don’t want) to mess with their lives like that,” Smith said. “It’s good they closed it, there’s so (many) schools around the area and you never know.”

Students in the division were alarmed by the threats and agreed with the call to shut down all schools.