Colin Mochrie, of Whose Line Is It Anyway?, will be hosting an evening of improv performances by himself, Deb McGrath and Deborah Kimmett.

The three Canadian improv comedians will also share humourous insights on life and comedy throughout the show titled, A Night of Comedy with Colin Mochrie & Friends.

Proceeds for the event support the YMCA of Kingston, Ont. 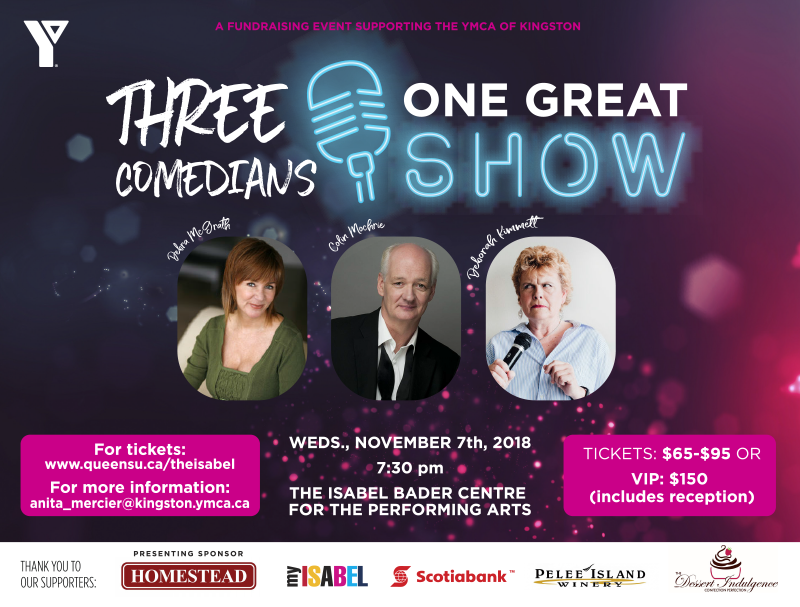 Ahead of the show, Global News spoke to Mochrie about his show with Brad Sherwood, Whose Line Is It Anyway paving the way for improv comedians, and what he believes has changed during his time in the comedy industry so far.

Global News: Can you tell me a bit about Scared Scriptless?
Colin Mochrie: We’ve been touring, I think this is our 16th year.

Wow!
Yeah, I’m at that age where every number seems big (laughs). We started back when Whose Line with Drew Carey was happening. And it’s basically a live version of the show. Everything is started from a suggestion from the audience, we have audience members onstage with us. I think we’ve done every province except for two and every state except for two. We’re going to Australia and New Zealand next month so it’s worked out nicely for us.

What should the audience expect to see when they come see the performance?
We like to say it’s like a live version of Whose Line without the tall guy and the black guy. A lot of the games will be familiar to fans of the show. There’s games that we’ve had to adapt or totally make up because there’s two of us and there’s a limited amount of games. But it’s even more interactive than the TV show.

When did you get your first laugh? Where were you and how did it happen?
I can’t remember my very first laugh but my first professional laugh. I was a very shy person and studious. My plan was I was going to become a marine biologist. In high school, a friend of mine dared me to go out for the school play and I got the part. That’s where I got my first laugh. And that’s where marine biology left and I decided to become a comedian.

Well, I think it’s been working out great for you (Laughs).
I think so, I think it worked out for both fields.

How did you get started with improv? Was it from that play and then you decided to go into improv?
No, the beauty of improv is I’m making a living as something that didn’t exist as an occupation when I was growing up. At that point, I was in theatre school and there was a demonstration of this thing called theatre sports which was basically improv. I thought, ‘Oh, this is kind of cool,’ so I got involved with that. It was something we would do every Friday night after hours at a theatre. The theatre manager was kind enough to give us the theatre. It started out where we would be pulling people in from the street and the McDonald’s next door, telling them to come see our show. They would ask, ‘What is it?’ And we would tell them, ‘We don’t know, you’ll have to give us information and we will make it up.’ And then within a year, it was a cult thing, we had lineups around the block. It’s been a nice little build for 40 years.

Do you think Whose Line paved the way for people to want to get into improv?
Absolutely, it certainly put improv into the public consciousness. Every place we tour, people are always saying, ‘That show really inspired me to start in improv. We started an improv group in high school or college.’ It’s kind of cool to be a part of that and get people excited about improv.

I have a few friends that go to improv groups and I think it’s great to see people trying it and getting outside of their comfort zones. I don’t know if I could do it because it seems scary.
Oh sure, once you get past that thing of, ‘This is the most horrible thing in the world,’ (laughs) it becomes the best thing in the world. When Brad and I are doing our show, I mean, we don’t do any work at all. That’s the beauty of this career. You just show up, make up crap. and leave (laughs). The main focus is to try to make us as uncomfortable as possible because that’s when we work best. When we’re in panic mode. It becomes fun after a while.

During your time in this industry what sorts of changes have you seen?
Well, the most obvious thing is the #MeToo movement, which I think has been absolutely great. I always knew women had to deal with that sort of thing more than men did, but it wasn’t until #MeToo happened and every one of my friends had a story. Although it didn’t shock me, it did shock me that every single woman I knew had an experience like that. It’s nice that it’s out in the open now and it started conversation. We still have a long way to go.

And changes just in the comedy part, people are always trying to find new ways of making people laugh. I don’t know if you can (laughs). We’re at the point now where it really depends on the performer and their point of view. You really can’t reinvent the wheel. There are things that are being done that were done in the early days of comedy, even on radio comedy. I think it’s a healthy place right now. There is a danger of some political correctness and there’s also a danger of just going crazy and saying things to offend people just because you can offend people.

Who or what makes you laugh?
My wife Deb McGrath, she’s very funny. I have a lot of funny friends. Monty Python has always made me laugh. These days Veep, Julia Louis-Dreyfus is a genius.

You can get lost on YouTube for hours watching fail videos.
You can! I love it. I love people who are just confident and then something horrible happens to them (laughs).

Do you have any tips for people who want to get into comedy?
My first tip always is, if there is anything else that you kind of like or you’re good at, just do that instead (laughs). But if you really want to do it or it’s because you have to do it, do it as much as you can and wherever you can.

Sign up for amateur nights, or if you’re doing improv, the great thing about it is you can do it anywhere. The more you do it, the more confident you get and you find out where your weak spots are, whether it is dealing with an audience or just your basic stagecraft. And get ready to enjoy bombing, because no one has ever gone through their comedy career without bombing. Sometimes you need to take that, embrace it and enjoy it. It really actually does make you stronger.

[This interview has been edited and condensed.]

You can purchase tickets to “A Night of Comedy with Colin Mochrie & Friends” here.