This is the best way to run, according to scientists

Scientists in the U.K. may have figured out the best way to run.

According to new research published in the American Journal of Sports Medicine by The University of Salford’s Running Performance Clinic, when it comes to running-based injuries, most of them are caused by improper technique.

“These running injuries are some of the most common injuries experienced by runners and can lead to considerable time off the roads,” explained author and physiotherapist Chris Bramah in a statement.

“For any runner, time off due to injury is incredibly frustrating. What we wanted to do with the study is identify whether there were aspects of running technique that may be contributing to these injuries.”

The research and the results

Bramah and his team looked at the technique of 72 runners and used 3D infrared cameras to analyze their styles. Most of these runners addressed common complaints related to the exercise, including runners knee, shin splints and Achilles tendinopathy. What researchers wanted to figure out was if their running technique was causing some of these injuries.

They noticed patterns right away, the study noted, especially for runners who didn’t have injuries.

WATCH: How to get ready for fall running

“These included an outstretched leg and high foot angle at initial contact, as well as greater forward lean. But the biomechanical pattern most strongly associated with all the injured runners was side to side pelvis drop, otherwise known as contralateral pelvic drop,” the authors explained.| 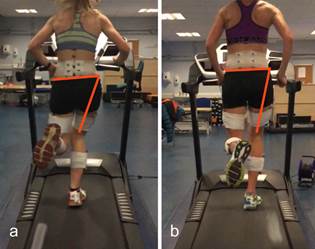 Runner A is running with an “injured pattern characterised by pelvic drop” while runner B is healthy.

READ MORE: Winter running — not as tough as you think

Researchers also noted posture played a role in how people ran — people who complained of injuries tended to lean forward.

“What we think may be happening, is that these postures are increasing stress through the entire body, and it is simply the weakest link in the chain that becomes injured first — i.e. the knee, the Achilles.”

Running starts at the gym

“You can’t run to get into shape,” she told Global News. “Running is hard on your body, joints and muscles.” She added if you’re a beginning runner or if you haven’t been to the gym for a long period of time (like more than six months), don’t start exercising by running.

“You have to progress slowly. Run three minutes, walk three minutes and work your way up,” she explained, adding that running starts with strength training.

Start by working on your butt, core and hip flexors to make sure you aren’t slouching or learning forward when you run.

READ MORE: Best exercises for women by age — What to focus on in your 30s, 40s and beyond

“When you run, your leg has to go behind you to push you forward and you need butt strength for that.” Start by doing planks, lunges, squats or other areas of your body that focus on the glutes and core.

And if you are not sure what your form looks like, ask for help. Talk to an expert, like a trainer, to analyze your form, or even get a friend to record yourself running to see how your legs move. She adds this can also show you specifically if your knees cave in or if you need better footwear.