Mexico jetliner crashes, burns after takeoff, all 103 onboard survive

By Amy Guthrie The Associated Press

MEXICO CITY – An Aeromexico jetliner taking off in a blustery storm smashed down into a nearby field but skidded to a stop virtually intact, and all 103 people aboard were able to escape advancing flames before fire engulfed the aircraft.

Passengers expressed gratitude to be alive, but many were extremely shaken after the crash Tuesday afternoon.

“It was really, really ugly,” said Lorenzo Nunez, a passenger from Chicago who fled the plane with his two sons and wife. “It burned in a question of seconds,” he told reporters, snapping his fingers for emphasis.

WATCH: Passenger plane with 103 on board crashes in Mexico, dozens injured

Survivors said the Embraer 190 plane burst into flames right after it hit the ground.

“We felt the flames coming quickly … there was a lot of smoke,” Jaquelin Flores told the newspaper El Sol. 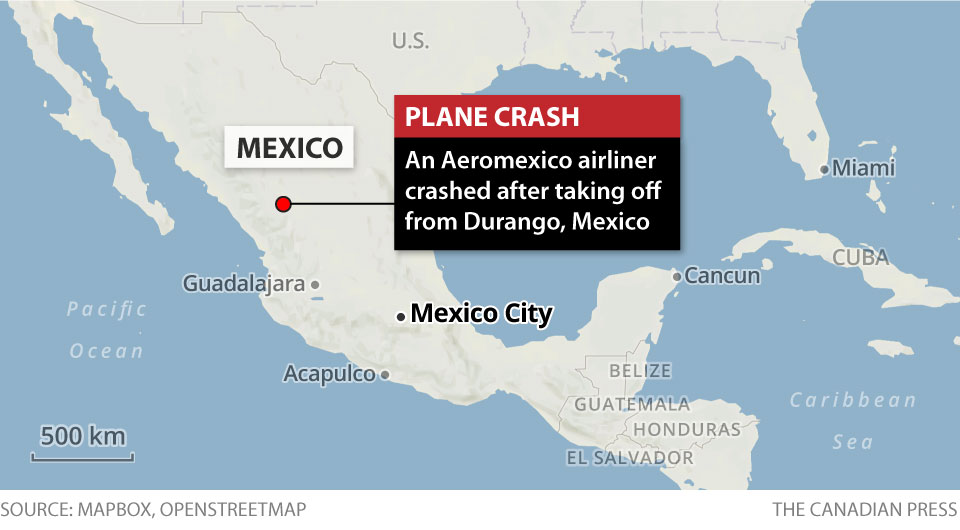 Romulo Campuzano, head of a political party in Durango state who was on the plane, told Foro TV that both wings were on fire as he bolted from the aircraft.

Durango state Gov. Jose Aispuro said a gust of wind hit flight AM2431 heading from the city of Durango to Mexico City just as it was lifting off the tarmac, forcing the pilot to abort takeoff.

Passengers said they heard a loud noise as the plane’s left wing banged to the ground, and both engines tore loose. The plane stayed upright, though, and the escape slides activated.

Aispuro said it was too soon to speculate on the cause of the crash. Mechanical failure and human error could be factors, but certainly the weather wasn’t favourable. Strong wind and heavy rain with marble-sized hail lashed Durango city, even damaging hangars at the airport.

Story continues below advertisement
WATCH: An Aeromexico plane crashed close to an airport in the northern state of Durango on Tuesday, July 31, 2018.

“The most important thing in the seriousness that is an accident of this nature is that there were no deaths – that’s what is most encouraging for us,” Aispuro said at a news conference.

After the accident, several passengers walked away from the plane before first responders arrived. Some sought medical help, while others rushed home to loved ones. Officials spent much of the afternoon tracking down survivors to ensure that everyone was accounted for.

Officials said 49 people had been hospitalized – most with minor injuries. The pilot suffered the most serious injury, a cervical lesion that required surgery. Some people had burns on a quarter of their bodies, said Durango state Health Ministry spokesman Fernando Ros.

Aispuro said all were expected to live.

Aeromexico Chief Executive Officer Andres Conesa described the day as “very difficult” and credited the timely reaction of crew and passengers for the lack of fatalities.

“Our heart is with those affected and their families,” he said at an evening news conference.

He said the jetliner had been sent for maintenance in February and the crew was well-rested, having started their work day in Durango.

The website Planespotters.net said the Brazilian-made medium-range jet was about 10 years old and had seen service with two other airlines before joining the Aeromexico fleet.

Operations were suspended at Durango city’s Guadalupe Victoria airport after the crash.