The committee that reviews applications to redevelop Ottawa’s heritage properties has rejected Ashcroft Homes’ latest bid to repurpose the site of a 19th century convent in Westboro — a controversial project that’s been in the works for years.

While residents and heritage experts welcomed the Ottawa developer’s plan to restore several aspects of the one- and two-storey convent, many decried Ashcroft’s proposal to demolish the building’s west wing and southern link to make way for a nine-storey, L-shaped residential and commercial addition, with a two-storey underground parking garage.

The most recent design plans faced a new wave of criticism at the built heritage sub-committee’s meeting Thursday from community members who don’t want to see the two historic wings razed to the ground and who claim the L-shaped addition will overwhelm the remaining heritage structure. (The southern link would be replaced by a stone wall.)

“There’s a lot that would have to be changed to make us feel comfortable with this,” said Linda Hoad, vice-president of programs at Heritage Ottawa.

The result was a split decision, with sub-committee members voting 4-2 against. The sub-committee will recommend the planning committee reject the application at its next meeting.

The convent at 114 Richmond Rd. was built in the mid-1860s as a Gothic villa for Ottawa merchant James Dyke. It changed hands several times over the next four decades until Les Soeurs de la Visitation, a cloistered religious order from France, bought the building in 1910. It remained their home for a century. 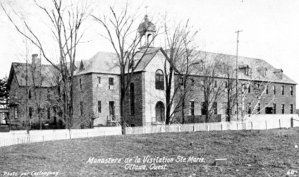 The building has been vacant since the sisters moved out in 2010 and efforts to find a new use for the site have dragged on since.

In late 2017, Ashcroft initially proposed to modernize the building for commercial and office use. But that proposal triggered significant pushback from residents, community groups and Jeff Leiper, the incumbent candidate for Kitchissipi ward councillor.

The application also didn’t clear the bar for the city’s heritage department because “it required the loss of too much of the building’s original fabric and the complete infilling of its central courtyard,” staff said in a report to the built heritage sub-committee.

The convent is a designated heritage building under the Ontario Heritage Act, which means any changes to the property have to be approved by Ottawa city council.

Community pushes back against height, density and use of proposed site

Some speakers at Thursday’s meeting argued the nine-storey height of the proposed L-shaped addition would be “out of scale” with the original two-storey building.

The developer has proposed several stepbacks on the west portion of the addition to build up to the nine storeys, but critics said the transition is still too abrupt and the addition too close to the original structure.

Ashcroft’s intention to carve out space for restaurants and B&Bs was also the subject of much debate. Leiper and others questioned the viability of commercial businesses in a largely enclosed space, much of which wouldn’t be visible from main roads. (Several newer Ashcroft condo buildings completely block views of the convent from Richmond Road — development that has left a bitter taste in many residents’ mouths.)

They argued Richmond Road is already a revolving door of businesses who set up shop and fail — and proposed opening up some space in the repurposed convent site for community use instead.

Rod Lahey, the architect for the addition, told the heritage sub-committee the commercial space could be re-adapted for residential use if it doesn’t work out.

Developer offers to restore many of original convent’s features

In the report to committee, staff said the developer has indicated it would restore the heritage structure’s tin roof, remaining original windows, bellcote, bargeboard, stone walls and gable dormers on the outside roof slope.

Also on the to-do list: restoring the original house’s historic verandah, as well as the convent’s long verandahs, and repointing all exterior walls where necessary.

Asked how the city could be assured the developer would complete a proper restoration, Lahey said the staff could make it a requirement for the developer’s occupancy permit — but he argued against forcing Ashcroft to do the restoration work first because the construction will likely fund the refurbishments.

In comments included in the heritage department’s report, Leiper said Ashcroft’s application represents “a legitimate path forward” for the convent’s restoration and redevelopment.

But, after a lengthy series of presentations, questions and answers at Thursday’s meeting, Leiper ultimately didn’t throw his support behind the project.

Called it a “long and contentious” application, Leiper said he wants to work further with the developer and community members in the coming weeks to achieve “something that’s less overpowering of the heritage building” and asked committee members to vote against the proposal.

Leiper is not a member of the built heritage sub-committee and did not participate in the vote.

The planning committee is next scheduled to meet on Aug. 28.