Emergency officials in the central Okanagan are keeping a close eye on the rising water levels of Okanagan Lake.

As of Tuesday morning, the lake was sitting at 342.59 metres above sea level.  That is 11 centimetres above full pool.

Last week, the lake was rising about six centimetres a day but in the last 24 hours, it rose by only 2.3 centimetres.

While the rate of the rising water has slowed, emergency officials urge residents living along the lake and in low-lying areas to remain vigilant.

The Central Okanagan Emergency Operations Centre (COEOC) said that residents need to be prepared for levels similar to the devastating flood season of 2017.

That’s because the snowpack that feeds into Misison Creek is still 157 per cent above normal.

The COEOC said that weather can also play a major contributing factor in the flooding threat.

One creek that emergency officials are less concerned about is Mill Creek.  That’s because it’s fed by the low-to-mid elevation snowpack which has significantly diminished. 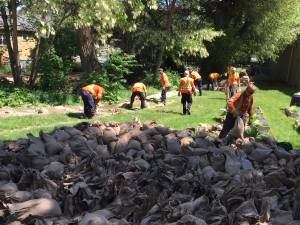 In fact, crews were taking away some of the sandbags along Mill Creek on Tuesday morning to make them available to those who live along or near Okanagan Lake.

Last week, the provincial government said Okanagan Lake was expected to peak in the first or second week of June with a prediction it would reach 343 metres, that’s only 25 centimetres below the damaging levels of 2017.