It never hurts to ask a stranger for help – even if it has to do with math.

Denise Wilson of New York said she was on her way home from work when she saw a man with a hat helping another subway rider, who was wearing a red jacket, with fractions.

Wilson later found out the man in the red jacket was Corey Simmons, a single father to a nine-year-old boy.

Simmons was trying to relearn fractions to help his son, third-grader Corey Simmons Jr., with an upcoming math test since he had failed one, a week before.

“I was like, ‘Wow, that’s amazing because a lot of dads don’t get enough credit,” said Wilson to Global News.

She went on to say that the man in the hat, who is unknown to both Wilson and Simmons, was showing Simmons different ways to relearn fractions.

“When I got off [the subway] it seemed like Corey had a better understanding of it,” said Wilson. “It was just so heartwarming.”

“It felt so good,” said Wilson, about the comments she received on the posted photo. “Other people felt what I felt and I captured the moment and I was so happy about that.”

When Global News spoke to Simmons about the viral photo, he was excited to share some good news.

Trending Stories
Story continues below advertisement
“My son passed his fractions test this morning. He got 100 out of 100. All 23 questions right,” said Simmons. “We went over [the fractions] last night and then again, in the morning. When I sent him off to school, I felt so confident.” 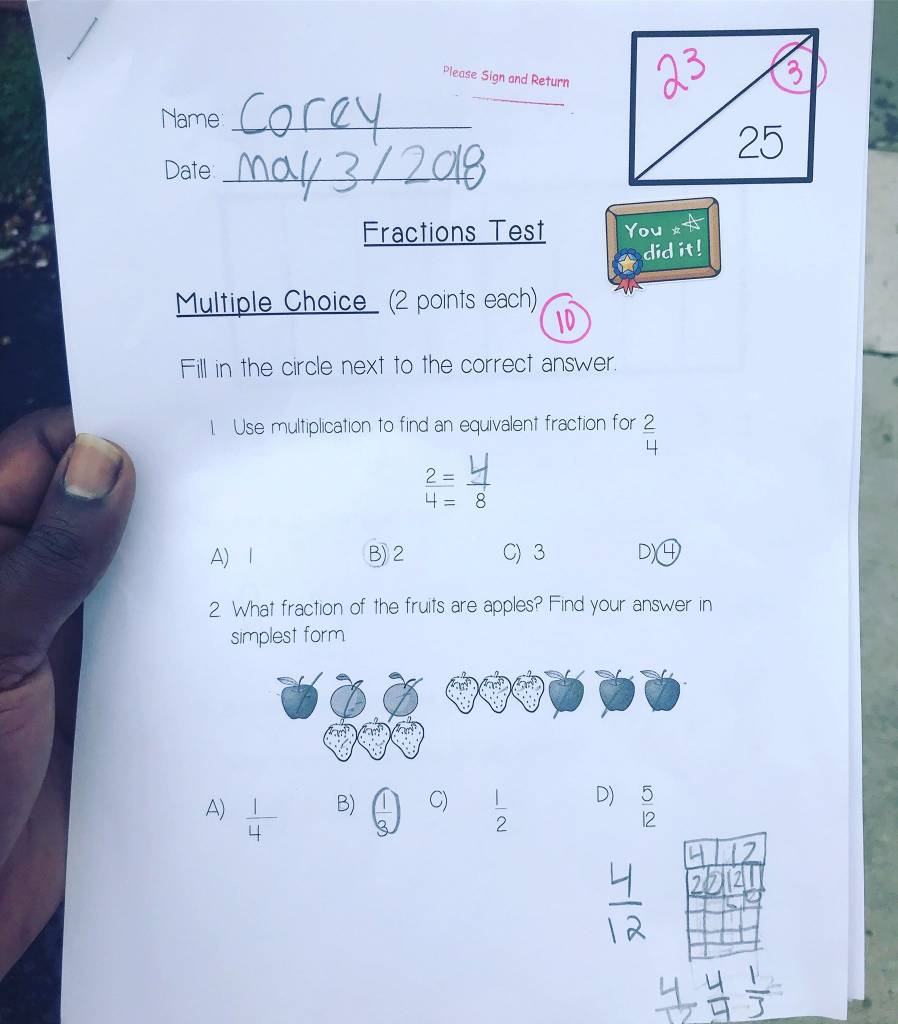 The father said he hopes people can take away a valuable lesson from his story.

“If you need help with something, ask,” Simmons said.

“When I was looking at the fractions, I asked the man if he could help me,” Simmons recalled. “He corrected me if I was wrong and said I was right when I was right.”

Simmons said he was too busy getting help from the Good Samaritan to know that Wilson had snapped a photo of them.

“I’m that type of person… if someone’s sitting next to me and I feel like they can help me, I’m going to open my mouth,” said Simmons. “I don’t have a problem doing that. I’ll do it again tomorrow.”

Simmons said he also told his son that he shouldn’t be afraid to ask people for help if he needs it.

A lesson Simmons Jr. said he will do. For now, he was feeling good that he had passed his test.

“My son’s happy. We live together and he’s happy that people know we’re helping each other,” said Simmons. “I just want people to know that it doesn’t matter about your race or gender… people shouldn’t bite their tongue on information. It’s free and can lead you in the right direction so much.”

Simmons has set up a GoFundMe page in hopes of being able to send his son to Kumon to help continue to improve his grades.