She may be one of the most highly regarded soccer players in Canada, but Stephanie Labbé says despite Calgary Foothills FC saying she was good enough for their team — the Olympian won’t be allowed to play in their league because she’s a woman.

The 31-year-old goalkeeper, who hails from Stony Plain, Alta., has already played on some massive stages in her sport, including the 2016 Rio Olympics where she helped Canada win a bronze medal.

This spring she had been working to make the Foothills team, which plays in the Premier Development League (PDL), a North American men’s soccer league.

In a blog post published to her website on Tuesday, Labbé said the PDL told her she wouldn’t be allowed to play.

“I have given it my best fight and feel myself fitting in, but unfortunately, not everyone is as open-minded about this situation,” she wrote.

“After inquiring to the league, the PDL’s initial response was that as per the rules, ‘The PDL is a men’s league’ and ‘given that the PDL is a gender-based league, women are ineligible to play.'”

On Wednesday night, Labbé told Global News that while there are professional women’s teams in other countries, she was hoping to play in Canada.

“There is no professional women’s team in Canada that I can play for,” she said. “That’s not something I can control… my gender.”

In March, Labbé told Global News her goal is to lead Canada’s women to a World Cup and Olympic title and that she believes playing with men will provide her with the best opportunity to prepare for those challenges. 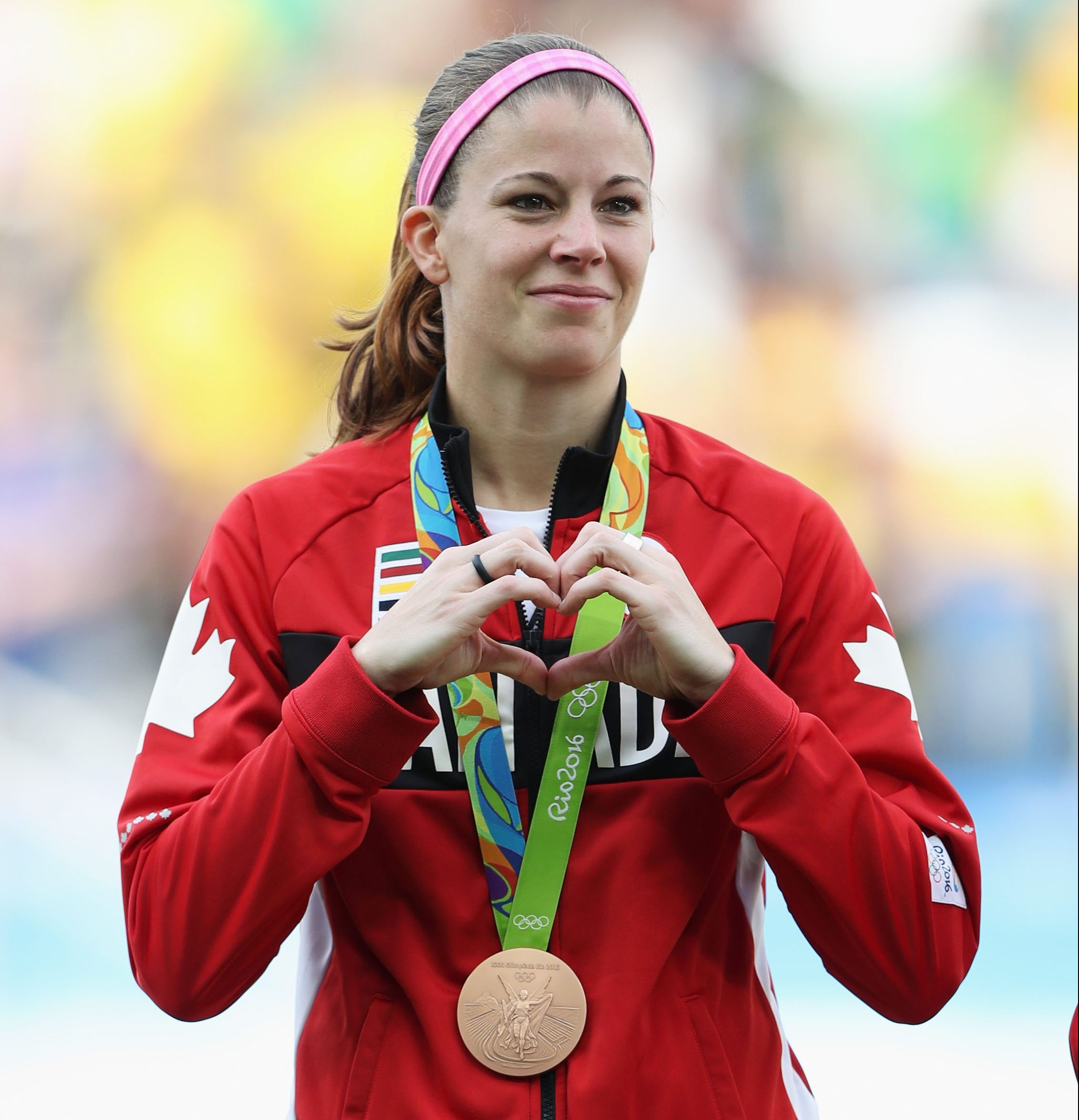 ABOVE: Canadian goalkeeper Stephanie Labbe of Canada celebrates with her medal following her team’s victory during the Women’s Olympic Football Bronze Medal match between Brazil and Canada at Arena Corinthians on August 19, 2016 in Sao Paulo, Brazil.

Tommy Wheeldon Jr. , Calgary Foothills FC’s coach, said Labbé is “world-class.” His team asked the league if they could have her play, saying they believed she earned a spot as one of the team’s three goalkeepers.

“We just posed a question to the league because I’ve never seen it in the league before, and they just came back and said it’s in their rules, it’s a men’s league,” he said. “There’s female equivalents and there’s no mechanism to challenge that rule at this point.

“Steph has to play and that’s the most valuable and important thing here. We want her to play at the highest-level because she’s a world-class international goalkeeper,” Wheeldon Jr. went on to say.

“So, we have our UWS (United Women’s Soccer) women’s team… we’re trying to see if that’s an option to get some games while training with us. We’ve got some really cool things in the UK in the pro leaugues there that we’re venturing into.”

Despite her disappointment, Labbé’s post also expressed optimism about the future.

“In the past three weeks of my soccer life, I have conceded more goals in training than I have in three years,” she wrote. “I have also dislocated a finger, received a nice (large) fluid sac on my shin from a tackle and quickly realized that the only skill I have when playing FIFA on PS4 is scoring on my own goal.

“Despite these downfalls, my confidence and excitement about where my development is going is higher than ever. I feel myself getting quicker, I’m seeing the ball earlier, my hands have become stronger with every save and this is all because of making mistakes, and a lot of them.”

Labbé said in her time training with the Foothills, she has appreciated the blunt feedback teammates provide each other with.

“From my experiences in my previous environments this straight-to-the-point feedback has been lacking,” she wrote. “I can’t say enough about this group of guys. I truly feel like they treat me like one of their own. They added me to the players’ private chat, if that says anything. The staff and club opened up their door to this opportunity and made me feel so welcome.”

“She’s very understanding of the situation,” Wheeldon Jr. said. “You know, that shows in her blog and her writeups and the way she conducts herself and we’re happy to have her as part of the club.

“She’s one of the team… and that’s how we’ve treated her.”

Labbé has earned 49 caps for Team Canada and had been looking for a place to play since parting ways with the National Women’s Soccer League’s Washington Spirit earlier this year.

“She was going to national team camp earlier in the year, and when she returned, her contract had expired with the NWSL and she said, ‘Look, how would you feel about me competing for a spot?'” Wheeldon Jr said. “And I basically said, ‘Listen, if you can keep the ball out of the net, then I’ll take you.’ And from that day on, we’ve just treated her like a soccer player and she’s lived up to it. There’s a reason she’s got [almost] 50 caps for Canada and played in Olympics and World Cups, she’s world-class.”

Watch below: On Aug. 23, 2016, Quinn Phillips was there when women’s soccer bronze medallist Stephanie Labbé was greeted with cheers at the Edmonton International Airport after the Olympics in Rio.

Global News has reached out to the PDL but did not receive a response by Wednesday night.

The PDL issued a statement to The Canadian Press, however.

“Like virtually all of our peer leagues around the world, the PDL has gender-based eligibility requirements, which we applied consistently in this case,” the statement reads in part. “Although our specific mission relates to the men’s game, we applaud all that female players have done to move the sport of soccer forward in North America.

“Stephanie Labbé, in particular, has had tremendous success, and we wish her the best as she continues to pursue her career goals.”

Wheeldon Jr. said his team would continue to ask the league about whether Labbé can’t be allowed to play and wonders if the league will review its decision at some point.

The coach suggested he can understand the decision can be a complicated one.

“It’s a tough question to answer because then we open up that [Pandora’s] box and then suddenly (professional men’s player) Nik Ledgerwood says, ‘You know what? I want to play in the NWSL,'” Wheeldon Jr. speculated. “So I don’t know where the line is, that’s probably not for me to decide.
Story continues below advertisement

“What we want to do is give Steph a fair opportunity to fulfill her goals and dreams and can she play in it [a men’s league]? In my opinion, yes.”

Labbé had played in pre-season matches for Calgary Foothills FC, who kick off their regular season on May 11.

Wheeldon Jr. said even if she can’t play in league games, the goalkeeper can continue to practise with the team and play in exhibition games if she chooses to.

Labbé told Global News she understands Calgary Foothills FC now has to focus on their upcoming season but says she is not giving up on her desire to have the right to play with men.

‘I want to fight this fight because there’s so many young girls out there and I know that this is short-term and the fight probably won’t help me for this season but for that young girl who’s… that wants to do this one day, I’m going to fight it for her.”

She also said she hopes to spread a message of positivity to young girls who play soccer.

“Even when one door closes, another opens somewhere else.”

–With files from The Canadian Press and Global News’ Blake Lough, Lauren Pullen and Kevin Smith