The latest plans to convert Bonnie Doon Shopping Centre into a high-density, transit-oriented mix of retail and residential space have been unveiled.

In advance of a public engagement session on Wednesday, May 16 from 5 to 8 p.m. at La Cite Francophone, new renderings have been released by the property owners, Morguard Investments Ltd.

Margaret Knowles, senior vice-president of Morguard, said the company put a lot of focus on the public realm, the street network and connection to the LRT when creating five distinct districts within the site.

“These districts help guide the creative team in determining the building massing and distribution of residential and other commercial density throughout the site with the underlying principal of achieving the best integration with the existing Bonnie Doon community that we can,” she said.

The five districts would be: 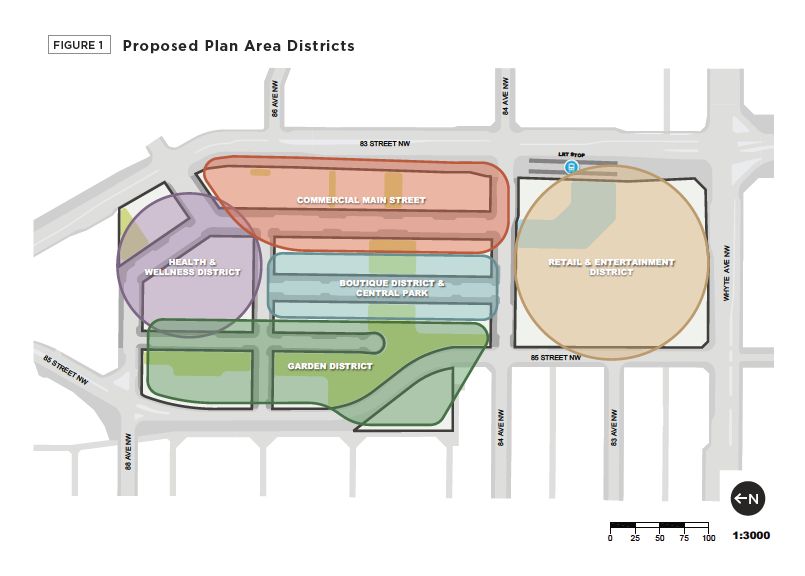 Taking into consideration Edmonton is a winter city, Morguard said the site has been designed to maximize sun exposure to the streets, sidewalks and open spaces across the day. Shadowing will be mitigated through tower placement and site design, she said.

Knowles said there will be a clear focus on sustainable building practices.

New construction won’t happen before 2020. When work does begin, the mall — including anchor tenant Safeway — will stay open, but the parking lot and other areas of the mall will slowly be redone.

Knowles said they hope to keep as many of the current retailers as possible.

Morguard is conducting several public engagement sessions to give stakeholders and the community a chance to weigh in on the redevelopment. Feedback was collected during a two-week session in early this year, during late January and early February.

At that time, Knowles said forums such as the open house are important to make sure development is heading in the right direction.

A report released last month by Morguard said a scan of the responses indicated participants have many design ideas to share, are eager to see a healthy mix of retail businesses, want plenty of green space and want to ensure getting around the site is seamless for all.

The May 16 session will provide updated information on the contents of the mall’s rezoning application, which Knowles said was submitted to the city last month and “took into consideration a lot of public input from our first public meeting and outreach programme earlier in the year.”

The existing 12-hectare mall sits at the corner of 82 Avenue and 83 Street, along which the Valley Line LRT will run. Bonnie Doon opened in 1958 as Edmonton’s second largest shopping plaza, and in the 1960s was expanded into a mall.

Over the years, the shopping has lost big anchor stores, such as Sears and, more recently, Target.

Morguard has managed the mall since 1994.

After public engagement is complete, a public hearing is expected to be held at Edmonton city council in the fall.