The results of the 2015 Household Travel Survey show there has been no change in the percentage of weekday trips that were made using public transit since 2005.

“Transit mode share has remained constant in the city at 8.6 per cent of all trips,” the survey found, “while absolute ridership numbers have increased by 49,400 trips.

“This reflects residential growth trends during this time, with highest growth rates occurring in new neighbourhoods that have only basic levels of transit service.”

“We’re looking for a city that is shaped differently and where people move differently 25 years from now,” he said Tuesday. “We’ll look back then and determine whether we’ve achieved success in increasing mobility options.”

“I think a more relevant long-term trend would be number of 18 year olds with driver’s licences. That’s dropped over the last 10-15 years from 90 per cent to 70 per cent. That’s going to continue dropping.

“People are saying that a child born today will likely never have a driver’s licence because of changes in transportation systems. I think those are the trends that the city watches, rather than a snapshot in time.”

“Unless you live in an area that has good coverage, it’s sometimes really hard,” Judy Stelck said. “If I missed the 6:20 bus going home, there was no one after that because that was the last one.”

“Even putting in bike lanes and stuff — people aren’t really picking up on that either,” Vicki Shaughnessy said. “I feel like we’re a very drive-heavy city because our transit isn’t very effective, I find, at least the buses. I find the LRT is probably more effective than the buses, but then because of the urban sprawl as well.

“The only reason I’m taking LRT is because the parking downtown is so expensive, otherwise I would be driving,” she said.

“I’m OK investing tax dollars into the LRT,” Shaughnessy added. “Having it be a more effective system I hope means that more people will be invited to use it. 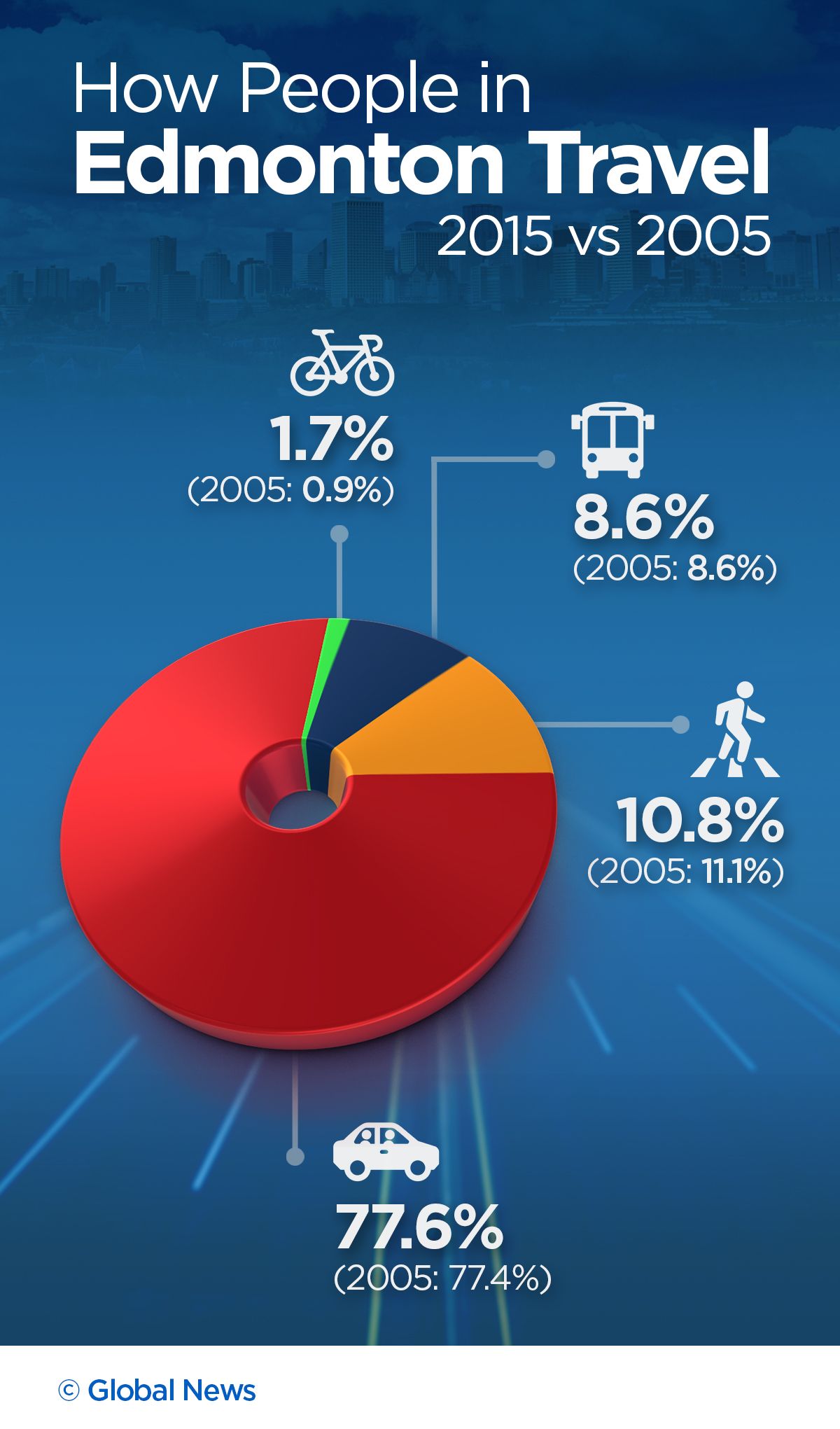 READ MORE: Why are some Edmonton bike lanes plowed before residential streets?

Meanwhile, the percentage of total trips made on bicycles increased in that time period, going from just under one per cent in 2005 to 1.7 per cent in 2015.

“Cycling experienced by far the greatest growth since 1994, increasing 4.5 times among city residents and 14 times among region residents with corresponding increases in mode share,” the survey summary said. “The survey results demonstrated that residents are more likely to cycle the closer they are to central Edmonton, with the university area having the highest number of cycling trips.”

Former Edmonton city councillor Kim Krushell said a regional system (that provides transit between Edmonton and surrounding communities like St. Albert and Sherwood Park) would convince more people to give up their personal vehicles.

“You’d get better bang for your buck,” she said, “and people actually getting out of their cars.

“Council, over the years, made some different decisions but they are eventually going to get to a regional system,” Krushell said.

When looking at the results of the Household Travel Survey, she thinks long-term growth must be taken into account.

“Transit use, you think about the population and the increases Edmonton has had, I think that has to be factored into those numbers.

“In the end … when you survey Edmontonians, what we did find is they don’t want to take buses so your alternative is a light rail transit system or something along that line,” Krushell said. “They see Calgary and they want that kind of system. I think the challenge for Edmontonians is it does come at the expense of drivers having to wait at certain locations.”

Watch below: Former Edmonton city councillor Kim Krushell sat on council when the Metro Line LRT deal was approved. Krushell says it’s easy to find blame with the City of Edmonton, but asks: What about signalling contractor Thales?

The 2015 Household Travel Survey results describe the weekday travel patterns of residents in the Edmonton Capital Region for a 24-hour weekday period.

Click here to read the results of the 2005 Household Travel Survey.