Many who left Manitoba Saturday morning pushed through despite the blizzard.  Fans like Greg Martin and Shelly Foster, who said the roads were slick and clogged with heavy snow, but as long as they kept to 30-50 km/hour, found the drive manageable.

“We brought the storm,” Martin quipped.  “It’s their ice but it’s our storm.”

Game 3 for the the Minnesota Wild and Winnipeg Jets gets underway at 6 p.m. CST. 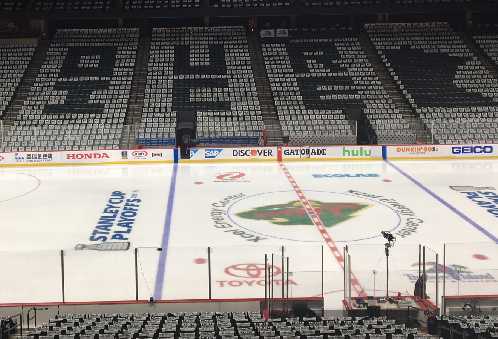 It’s the first home game for the Wild and on every seat at the Xcel Energy Center are towels for fans with the slogan “Our Ice.”

And here it is. Still making me laugh! pic.twitter.com/RGJAWOw3ey

As a “Go Jets Go” chant broke out a downtown bar, Wild fan John Klopfer yelled out “Is your team even here yet?”

The Jets flew out Saturday morning but were diverted to Duluth, Minnesota, as the Minneapolis-St. Paul International Airport cancelled hundreds of flights.

As of 4 p.m., it was still snowing outside the Xcel Energy Centre but at hotels near the rink fans for both teams didn’t seem to mind.

“Everybody is going to be wearing white,” Jets fan Randy Ayotte said. “And we’re going to bring a ‘W’ home for the Jets.”