John Bjornstrom dead: fugitive ‘Bushman of the Shuswap’ dies at 58

One of the legendary characters of B.C.’s Interior has passed away.

John Bjornstrom, known to many as “the fugitive Bushman of the Shuswap,” died suddenly on Jan. 13 at the age of 58, according to an obituary in the Williams Lake Tribune.

Bjornstrom gained notoriety two decades ago, when he escaped from a jail in the B.C. Interior — surviving for two years in an elaborate network of woodland basecamps and stealing from cabins.

The story began in Calgary in the late 1990s, when Bjornstrom was working as a private investigator looking into the scandal around fraudulent Canadian gold mining company Bre-X.

In an exclusive 2001 interview with Global News’ Ted Chernecki, he said his investigation had revealed too much, and people behind the scandal started threatening him and his family.

WATCH: Ted Chernecki’s 2001 series on John Bjornstrom, “The Bushman of the Shuswap” part one

He fled to the woods of the Shuswap until he was caught by police and sentenced to eight months in a minimum security jail.

But with just six weeks left in that sentence, Bjornstrom escaped — in his words, because his Bre-X tormentors had tracked him down and begun threatening him again.

For two years, he lived rough in the hills around Shuswap Lake as an escaped convict, to the mounting anger of cottage owners whose supplies and food kept him afloat.

At the peak of his run, he had an elaborate underground home that included a computer, cell phones and a wood stove he said was insulated from infra-red detection.

He kept a network of elevated tree outposts, along with a number of stolen vehicles including a dirt bike, Ski-Doo and several canoes.

He told Global News that his life in the Shuswap continued to involve an investigation into “the disappearance of people,” and that he was getting help from “a gift of the psychic ability … I get visions of things tomorrow today.”

Bjornstrom was also heavily armed and claimed to have wired Shuswap Lake with microphones to detect incoming boats and aircraft.

He left notes at many of the pilfered cabins, apologizing for his thefts — but vowing to die before he was captured.

“If that is the end result, then that’s the way it will be. I’d rather do that than go back anyway,” he told Global News at the time.

Police caught up with Bjornstrom less than a month after his interview with Global News.

WATCH: ‘Bushman of the Shuswap’ wants to be mayor of Williams Lake

Posing as a documentary film crew, the RCMP captured him in 2001; he was was later sentenced to 23 months of house arrest.

Bjonstrom later became a log hauler and faded from public view until 2014, when he resurfaced in an unlikely — and ultimately unsuccessful — run for mayor of Williams Lake.

According to his obituary, Bjornstrom found more peace later in life — a joyful presence, beloved by his friends at the Salvation Army drop-in centre, and appearing regularly as Santa Claus for community Christmas dinners.

A celebration of life is planned for Bjornstrom at the Salvation Army Church in Williams Lake on Feb. 18. 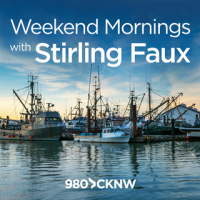