How is the City of Calgary preparing for marijuana legalization?

While municipalities still have a lot of questions regarding the impending legalization of marijuana, the City of Calgary has already started preparations for legal pot hitting city streets.

The Alberta government announced its proposed cannabis legislation Thursday, which would include a mix of public and private sales, along with strict control of online sales.

The city will begin online engagement surveys starting Monday, hoping residents will give input on what they think the legislation should look like.

“We’re hoping to gather feedback on what Calgarians are looking for,” said Matt Zabloski, the lead for the city’s cannabis legislation project.

Calgarians who want to participate in the city’s engagement process between Nov. 20 and Dec. 10 can visit engage.Calgary.ca/cannabis.

For more information on cannabis legalization in Calgary from the city, visit Calgary.ca/cannabis.

Zabloski said there’s also been a considerable amount of interest among private citizens looking to open stores, adding it was welcome news that privatized sales are falling under the province’s legislative umbrella.

“We do need more details as far as knowing what the province is planning, as far as the zoning regulations go and as far what a business licence is going to look like,” Zabloski said.

“We need to know whether or not a municipality will have the ability to regulate those, and that’s what we’re looking forward to working with the province on moving forward.”

One-hundred-fifty stakeholders have already contacted the city about getting into the cannabis business. One of those is entrepreneur Jason Kujath, who applauded the province’s plans on Thursday.

“Had we had to go [to] a public model, they would have had to re-invent the wheel for the production and retail of cannabis.”

Kujath said he hopes marijuana legalization will help foster entrepreneurship in the province.

“Here we have the opportunity through the retail cannabis network that’s going to pop up to create 10 to 15 jobs per store front,” he said.

Zabloski said the city is confident it will be able to meet legalization deadlines, despite hoping for further clarification from the provincial government on issues like zoning and separation distances.

“We still have to wait on what the province announces on that before we make a determination as far as what the city is going to do,” he said.

“I think, like everyone else, we are concerned about the timeline but we are confident that we are going to be able to meet those timelines.” 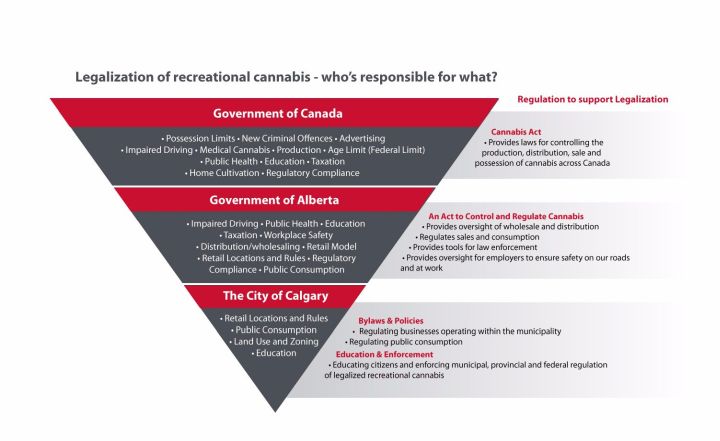 — With files from Global’s Joel Senick