Markers will soon dot the landscape of the Halifax Regional Municipality, serving as a permanent commemoration to the Halifax Explosion.

The commemorative markers will stand 10-feet high and incorporate English, French and Mi’kmaq text along with a Mik’maq petroglyph.

Rayleen Hill of RHAD Architects, the firm who designed the markers, says that she was overjoyed to be the one who had a hand in such a historic art piece.

“We were excited to strike the right tone, especially knowing how long these would be in the city for and being able to tell this part of history,” said Hill. 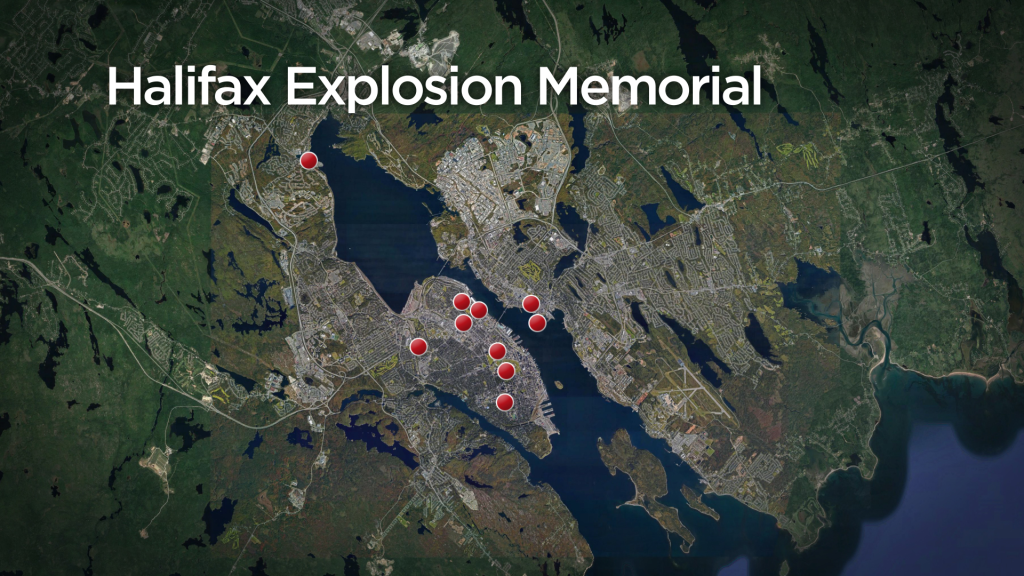 According to documents posted on the Nova Scotia tender website on Wednesday, the HRM is planning on placing 12 of the markers at nine locations around the municipality.

Elizabeth Taylor, Manager of Culture and Events for Halifax’s Parks and Recreation, said that each of the locations had been chosen for the stories that occurred there during and after the explosion.

“While the Halifax Explosion was a mass destruction, each of these stories and areas carried with it their own reponse,” she said.

“We’re looking forward to telling each of them.”

According to Hill, her design is meant to emulate a tree so that the installations would blend with any location they were placed in.

Each marker will be made of a pair of metal beams, intended to capture Halifax’s past and its present.

“Part of the pair will be corten steel, it will be laser cut with the story particular to the explosion in that location — that is representative of the past,” Hill told Global News.

Corten is a special alloy that gives the appearance of rusted metal.

“The other form will be in stainless steel that has been polished so that it’s supposed to be the Halifax now reflecting back on to the past,” Hill explained.

The stainless steel forms will have 100 perforations that will allow the sun to shine through the metal, representative of the lives lost as well as the 100th anniversary.

For example, the Fort Needham markers will be emblazoned with the quote and epigraph:

“The tower will be an emblazoned symbol of hope with its striking appearance growing from Fort Needham, with its bells ringing out across the city tolling for the first time visibly and audibly to its residents below and in Dartmouth, a reminder of the paths we have travelled since that awful day, and how we have got to where we are now.”

Each year on December 6, the MEMORIAL BELL TOWER’S carillon bells peal out in memory of all those who suffered because of the blast.

Only the markers at Fort Needham Park will be in place for the 100th anniversary of the explosion. The park hosts an annual ceremony to remember the victims of the disaster.

The markers are supposed to be erected by  Nov. 24 while the anniversary will be held on Dec. 6.

The remaining installations are scheduled to be in place by March 2, 2018.

The Halifax Explosion killed about 2,000 people and levelled much of the city after a cargo ship carrying explosives collided with another vessel on Dec. 6, 1917.

The guest list for the 100th-anniversary ceremony is expected to include Prime Minister Justin Trudeau.

Commemorative services are also expected to be held at churches across the city, including at St. Paul’s Church on the Grand Parade, where the names of Halifax Explosion victims will be projected onto the church.