Rent took up more of Calgarians’ income in 2015 than previous years: report

Low-income families in Calgary are finding it more difficult to put a roof over their heads, according to a newly released report.

The report from the University of Calgary’s School of Public Policy found that for both single-parent and dual-parenting households, rent took up a sizeable chunk of their income in 2015.

Researchers at the university found that a single parent with one child, renting a “low-quality” one-bedroom apartment, directed 60 per cent of their income toward rent.

The number is the highest in the country ahead of both Toronto and Vancouver.

For a couple with two children, renting a two-bedroom apartment, that number was slightly lower at 55 per cent but was still the highest in Canada. 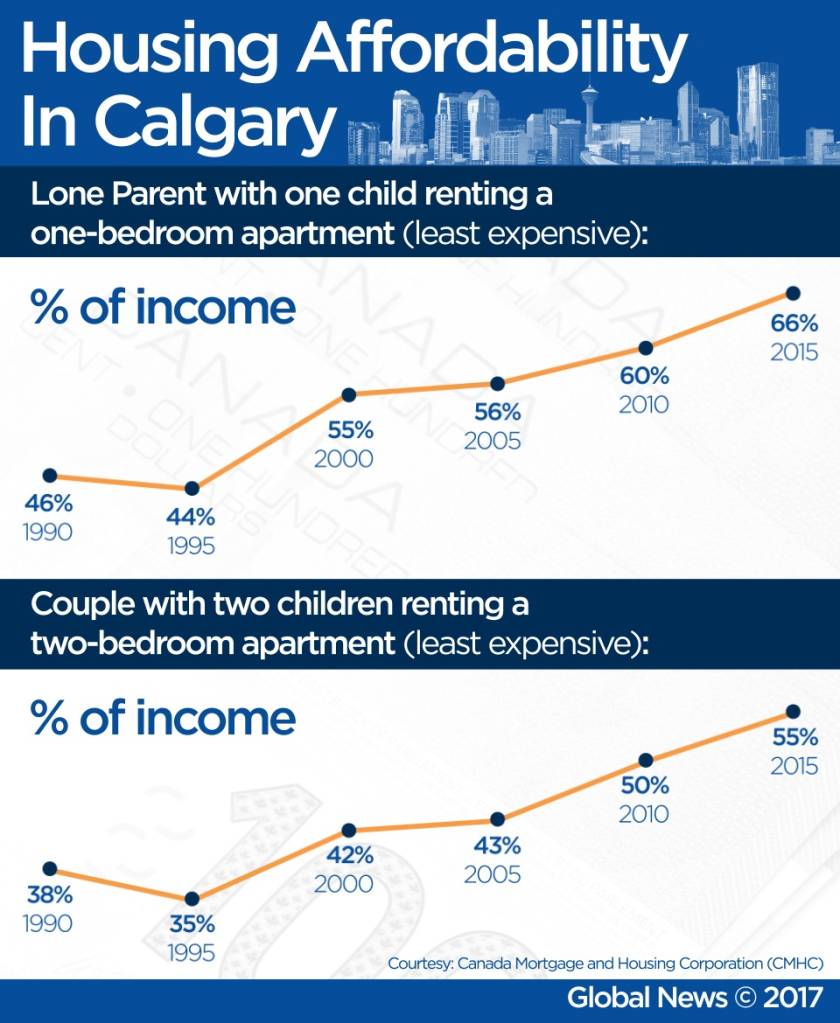 “That same lone parent who is devoting 66 per cent of her income to rent in Calgary, would only have to devote 31 per cent of her rent in Montreal,” said Ron Kneebone, with the School of Public Policy.

Teresa Goldstein said right now 3.6 per cent of housing in Calgary is affordable, whereas the national average is 6 per cent.

Goldstein said the city has two more affordable housing units opening in 2017 and is working on a number of regeneration projects.

“We know that we’re not the only piece of the puzzle,” she added. “And so, another area we’re working on is leveraging city lands.”

She said the city would provide lands that other non-profit housing providers could develop.

Kneebone said researchers wanted to show “what an affordable housing crisis means for someone with fairly limited incomes.”

“For them, if they can’t afford housing, their next step is homelessness,” he said.

He said the province has not raised social assistance incomes fast enough to keep up with rising rents.

“Those with limited incomes are falling further and further behind when it comes to trying to house themselves,” he said.

In a statement, the province said it is investing $1.2 billion over five years for affordable housing in the province.

“All Albertans deserve a safe and affordable place to call home. But the previous government didn’t prioritize affordable housing, leaving over 15,000 Alberta families on waitlists,” said Timothy Chu, press secretary for the Ministry of Seniors and Housing.

Chu said the province believes housing is affordable when it takes up no more than 30 per cent of a family’s income.

He said the government has tried to tackle the affordable housing issue by creating more housing and affordable childcare spaces and raising the minimum wage.

Kneebone also called on the federal government to target its resources in areas where the report has identified the greatest need – Toronto, Vancouver and Calgary.

News Talk 770 also contacted the Calgary Homeless Foundation and Attainable Homes Calgary but did not receive a response by publication time.