Challenging the Wage Gap: Who can help improve gender equality in Canada?

Dr. Rebecca Sullivan has dedicated her life’s work to pushing for equality. With women making just $0.87 for every $1 a man makes for the same work, the coordinator of the women’s studies program at the University of Calgary wants to see the wage gap in this country closed — for good.

When asked whose job it is, she replied:

“Well, it’s mine. It’s the job of researchers and teachers. It’s the job of politicians and policy-makers; but most importantly it’s the job of business leaders. If you are in a leadership position, if you are someone who is involved in the hiring and promoting and advancing and mentoring of employees — it’s your job.”

Cynthia Hansen is one of those business leaders. The executive vice president of utilities and power operations at Enbridge Inc. says she doesn’t take the job of being a role model lightly.

“You have to be willing to use your influence and power in a positive way; to accept that people in leadership positions, like mine, have a duty.

“We have this privilege that we need to both accept that and then use that opportunity to really help create more equality across the work space.”

Hansen worked her way to the top and says she faced wage inequality a number of times along her journey.

She now speaks to rooms full of men about equal worth. Some of the men are part of a group called MARC: Men Advocating for Real Change.

“You need to involve everyone and that starts with a tone from the top; making sure that women get opportunities for promotion,” she said. “So even though they may get paid the same rate at the same level, women aren’t given the same opportunities to progress and that creates part of the imbalance.”

READ MORE: Getting him to care for his elderly parents – Women’s next big fight for financial equality

Two years ago, when Justin Trudeau appointed a gender-balanced cabinet and said it was “because it’s 2015″, it opened up the conversation in Canada.

The Alberta government also has a gender-balanced cabinet.

Stephanie McLean, the Minister for Status of Women in Alberta, became the first MLA in the province’s history to have a baby while in office.

She says it is crucial to start paving the way for more women to enter—and stay in—the workforce.

“We know with the retirement of baby boomers that there is going to be a massive gap and a possible contraction in the economy,” she said. “So with needing women to go into the workforce and needing to grow our future workforce, we are certainly going to have to take a concerted effort to ensure we support women to work …And employers know this, especially those who are involved in watching the economy.”

Language in the office might also have to change. A study done by Fortune.com looked at hundreds of performance reviews of both men and women. It found women got far more critical reviews than men did, no matter if the boss was a man or a woman. 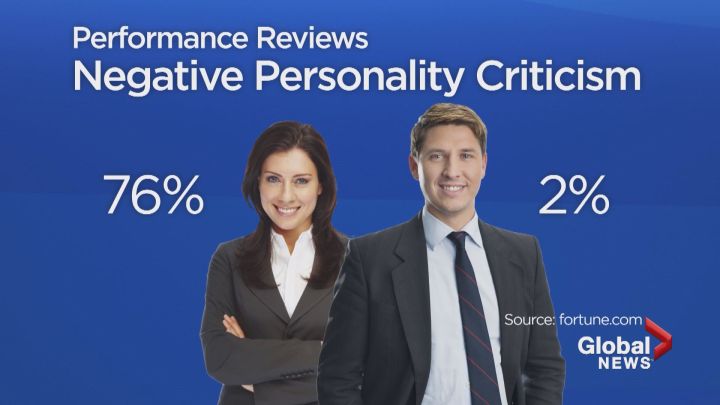 When women lead, words like “abrasive” and “bossy” were used, whereas men were described as “aggressive.”

When women were objecting to something in the workplace, the words “emotional” and “irrational” came up. Not so for men.

Sullivan says her life’s work is far from over, but she is hopeful we are headed in the right direction.

That said, she’s not sure the wage gap will every fully close.

“Will we ever reach full parity in wage employment? Probably not.”