U.S. President Donald Trump’s campaign website removed a controversial 2015 press release, which called for a “total and complete shutdown” of Muslims entering the U.S., shortly after White House press secretary was questioned about its existence.

During his daily White House press briefing Monday, Sean Spicer was questioned about Trump’s use of language on his campaign website, the same day the president’s revised travel ban was headed to a federal appeals court.

“If this White House is no longer calling this a ‘Muslim ban’ as the president did initially, why does the president’s website still explicitly call for ‘preventing Muslim immigration?’” ABC News reporter Cecilia Vega asked the press secretary.

“I’m not aware of what’s on the campaign website, you would have to ask them,” Spicer responded. “I know how we’ve talked about this from the first day of this administration as a travel ban that’s in this country’s national security interest to make sure that the people who are coming in here are coming in here with the right motives and reasons and that we’re having a public safety aspect to making sure that we’re protecting our people.

“We’ve been very consistent since the first day of this administration,” Spicer said.

The 4th U.S. Circuit Court of Appeals is hearing the Trump`s administration`s challenge of a lower court decision to block the revised 90-day ban on travel from six Muslim-majority countries.

On Dec. 7, 2015, Trump issued a statement “calling for a total and complete shutdown of Muslims entering the United States until our country’s representatives can figure out what is going on.”

As Vega pointed out on social media, Trump’s statement was scrubbed from the website at some point Monday afternoon.

Minutes after we asked the WH why the President's campaign website still called for a Muslim ban, it appears the statement was deleted. pic.twitter.com/1VzefJuoQF

Though the statement is no longer available, a cached version is still viewable and the original donald-j.-trump-statement-on-preventing-muslim-immigration URL is still linked to on the website. 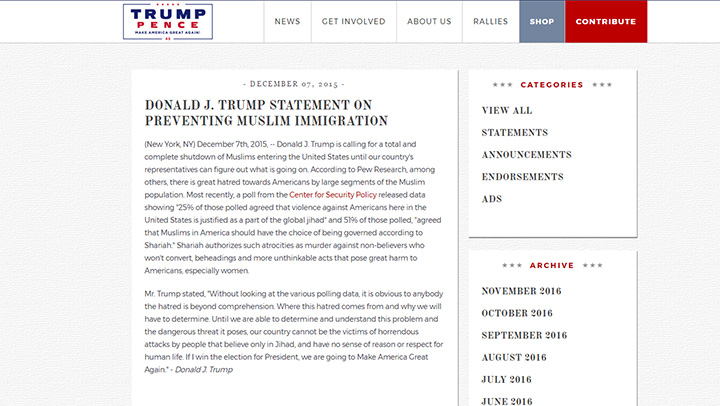 During Monday’s travel ban hearing, Omar Jadwat, an attorney for the American Civil Liberties Union, noted that Trump’s call for a “total and complete shutdown” of Muslims entering the U.S. remained on his campaign website even after he took office. That call appeared to have been taken down by the afternoon hearing.

–with a file from the Associated Press