Fake news this week: The butt-pat that wasn’t

Here’s a roundup of things that didn’t happen this week, or at any other time:

Did Barack Obama guide Melania Trump gently on the back, or was it something more indiscreet?

On Jan. 20, after Donald Trump was inaugurated, he and Melania Trump arrived at the White House. After waving to reporters, they went inside. The Obamas guided Melania through the doorway. It looked like this: 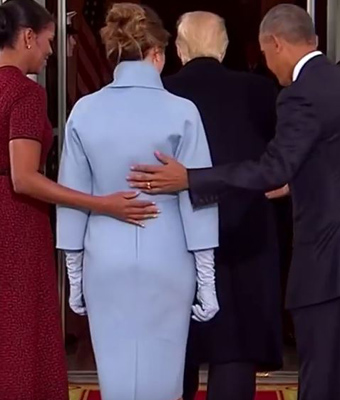 That evening, Jim Hoft, founder of the Gateway Pundit, (a right-wing news site that the Washington Post calls “an appallingly unreliable source of information”) told supporters, in the course of an f-bomb-laced tirade, that his site had been offered White House press credentials.

“The reason was that I was telling the truth and the mainstream media was telling the fake f—ng news!,” he told the Deploraball, an inauguration-night rally for Trump supporters.

The following weekend (it’s not completely clear exactly when from the timestamps) this Instagram account published a doctored version of the video still. It looked like this: 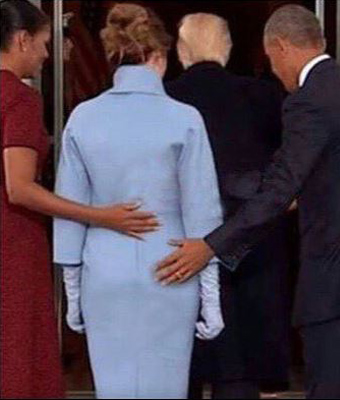 As Buzzfeed’s Craig Silverman points out, this is a terrible Photoshop job. You can still see the blur of where Obama’s arm actually was.

On Jan. 22, Gateway Pundit reported the butt-pat that never was as fact in a now-deleted post visible in Google’s cache.

Gateway Pundit has not responded to questions that Global News sent them by e-mail, the only way of contacting them that’s indicated on their site. (We asked whether Gateway Pundit realized the photo was doctored when they published it, why the story was taken down, and what the site’s correction policy was.)

At about the same time, Infowars.com editor-at-large Paul Joseph Watson tweeted out a copy of the original Instagram image. (Infowars founder Alex Jones also says he’s been offered White House press credentials, which he told viewers while apparently sitting in his car.)

READ: Fake news this week: Bikers for Trump aren’t cramming the highways, as far as we can tell

This didn’t happen either, but it displays much better Photoshop-fu than the effort above.

Marylanders preparing for #Inauguration weekend with a pinch of humor pic.twitter.com/ycraW6jp5R

Does this count as fake news? Possibly not — it’s a project by British artist Alison Jackson. The image can be seen in context here.

The ‘Trump’ figure is an impersonator who’s good enough to pass, more or less, at a distance in poor light. (The quality isn’t that much worse than the famous Rob Ford crack house photo.)

It signals another thing to watch for when filtering news.

Dozens of areas in Sweden are ‘no-go zones’.

There is a certain amount of violent crime in Malmö, a Swedish city; local police say it’s rooted in gang rivalries going back a decade or so. They also say it has nothing to do with an influx of refugees, which began a lot more recently than that, and that there are no ‘no-go zones,’ let alone a huge one covering the whole city.

Claims otherwise (like this one that paints Malmö as a flaming, ungovernable hellhole in need of martial law), Buzzfeed points out, are “now firmly tied to the influx of Middle Eastern refugees, and often invoked in anti-Muslim rhetoric.”

(‘No-go zones’ are a term coined in the early 1970s in Northern Ireland at the height of the sectarian conflict there, and described areas controlled by paramilitaries where police and soldiers couldn’t operate.)

For what it’s worth, an EU survey showed that people actually living in Malmö felt fairly safe, compared to dozens of other European cities. (Zürich was the safest, and Athens the scariest.)
READ: Fake news this week: No, California didn’t legalize child prostitution

One of Donald Trump’s bodyguards at the inauguration was wearing fake prosthetic arms.

It wasn’t clear what the point would be of such an elaborate deception, though some speculated it would allow the bodyguard to hold an automatic rifle with his concealed real arms. (But wouldn’t a pair of fake arms get in the way during a real assassination attempt? Never mind.)

The rumour got started when one of Trump’s stone-faced bodyguards at the inauguration held his hands in the same rather odd position — right thumb and forefinger holding left little finger — for several minutes.

(Eventually he moved his hands, so so much for that theory.)

The idea seems to have started, so far as anybody can find the true starting point of an Internet meme, at fraghero.com, which describes itself as the “largest independent gaming website in the world.”