Most people will spend the weekends leading up to Christmas doing shopping, attending holiday parties and relaxing – but not Dan Johnstone.

Better known as “Can Man Dan,” the Edmontonian known for his winter campouts to raise money and items for the food bank is going on the road again this year.

This is the sixth consecutive year that he will raise awareness and support for people in need during the Christmas season.

Dan will be completing four winter campouts across the province in hopes of raising as much food, money and awareness as he can for struggling food banks and people in need. (Scroll down to see his full schedule.)

“This is a very tough year for Albertans,” Johnstone said.

As of October, Alberta’s unemployment rate is 8.5 per cent, higher than the national average of 7 per cent.

“Food Bank numbers across Alberta have reached record highs, shelves are empty, and people are in need. A lot of good people have been laid off in the past year and they’re struggling to keep their family fed,” he said.

Marjorie Bencz, the executive director for Edmonton’s Food Bank, has been with the organization since 1989 and said this is the worst year she’s ever seen.

“The food is going out faster than it’s coming in,” Bencz said last month.

The strain on Edmonton’s Food Bank carried over from 2015. More people in Alberta lost their jobs and in the spring, the food bank was helping out Syrian refugees who settled in the city.

And then the Fort McMurray wildfire happened. In less than a month, Edmonton’s Food Bank sent more than $400,000 worth of food outside the city to help with the disaster and displaced residents.

Twenty-thousand food hampers are being handed out each month. That’s 5,000 more than this time last year. Bencz said another problem is donor dollars are down.

“It’s really, really tough out there, and these numbers show it,” Johnstone said.

Im out of here #yql! My 4 day campout for @IFBLethbridge is over! This is all thanks to you! Thank U & Merry Xmas!!! pic.twitter.com/wd3BXQng82

Can Man Dan’s 2016 “Feed Alberta Tour” will see him camp out in Edmonton, Calgary and Lethbridge over the next five weekends leading up to Christmas. Each stop will support that city’s food bank.

The tour will kick off Thursday morning at Southgate Centre’s Safeway (5015 111 Street), where Johnstone will be camped out 24-hours a day from 9 a.m Thursday until 6 p.m. Sunday.

Below is the full schedule: 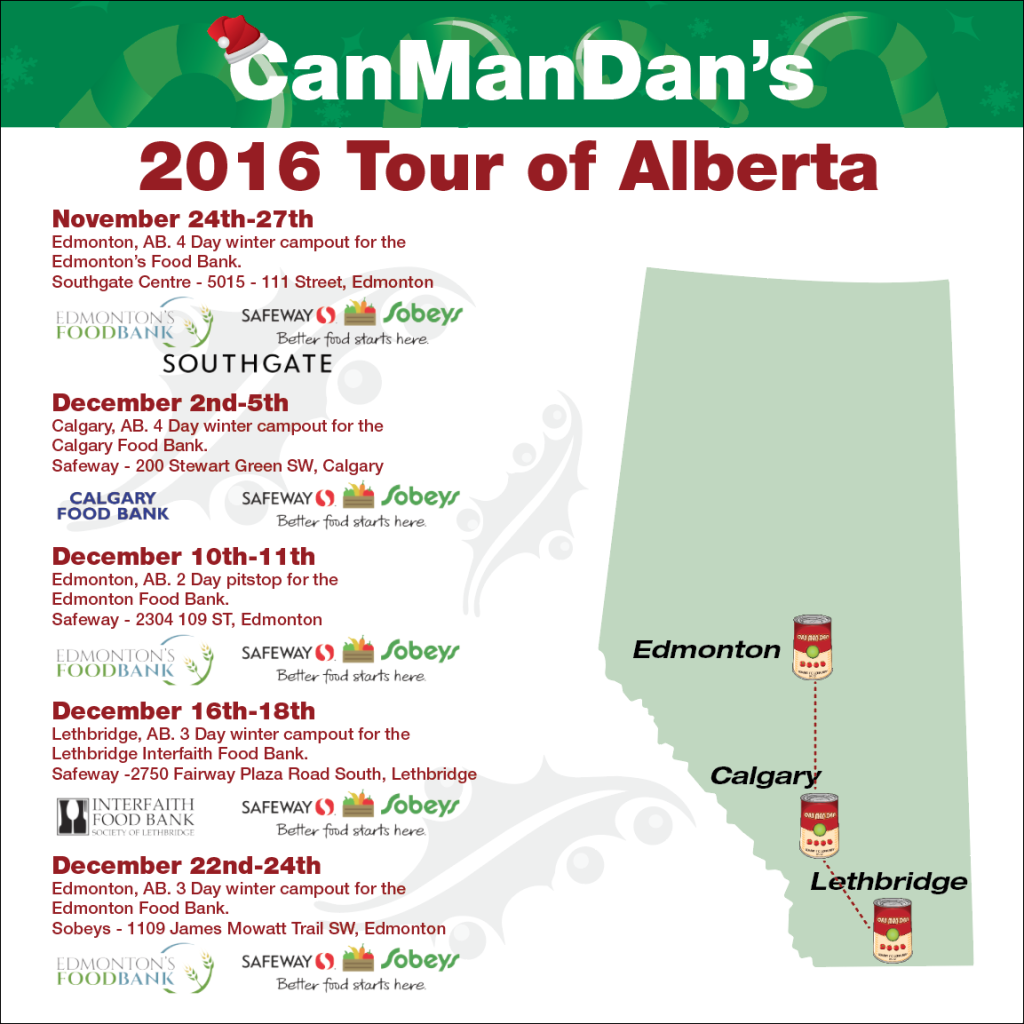