Covering Royal Visit 2016: Through the eyes of Global BC and Global Okanagan reporters

Brushing shoulders with the royals is a one-of-a-kind experience for most people, but for reporters who are tasked with following their every step, it can be a pretty unique experience as well.

A number of Global BC reporters were dispatched last week to cover the B.C. and Yukon visit of Duke and Duchess of Cambridge, Prince William and Kate.

Global BC reporters and camera operators had to go through multiple security screenings, battle the elements and even travel on a cargo plane to complete their assignments.

Here are a few of their testimonials from the “royal” front lines.

Travelling to Bella Bella to cover the visit by the Duke and Duchess gave me a small glimpse of the giant machine at work in a royal tour. 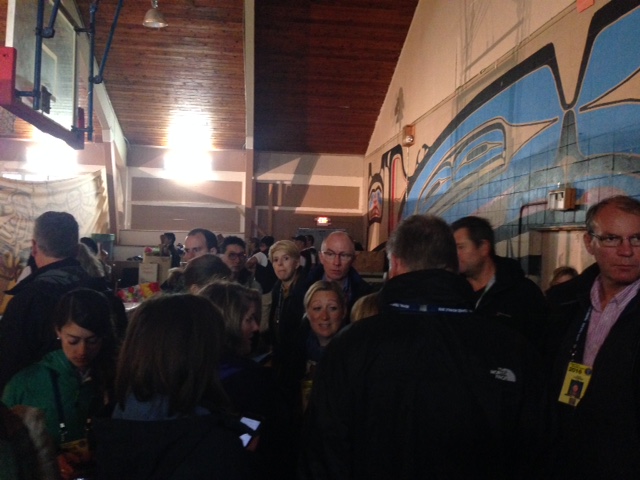 The rain on B.C.’s Central Coast had thwarted the schedule, and by the time the royals were supposed to arrive, nobody, including the RCMP, could even tell us where the first event would be staged. Everyone was still waiting for a royal decision! Journalists are not known for their patience.

Finally, police checked our bags and let us proceed to what had been decided as the starting point. And again, everyone waited.

What surprised me was the way in which all was forgotten the moment the Duke and Duchess entered the room.

The dozens of small children who had previously looked so bored, and their parents, who were quietly wondering when it would all begin, suddenly burst into cheers and applause at the sight of Will and Kate.

The chance for a brush with the royals’ unique brand of history and fame seemed to brush away any disappointment at all the day’s cancellations.

From then on, the day proceeded without a hitch.

The flight home was an opportunity to hear the British perspective on the tour. They lamented about not being able to snap a shot of Will and Kate without a politician by their side. I guess nobody told them it was an election year in B.C.!

Magically, the weather cleared for the ride back home too.

WATCH: The Duke and Duchess of Cambridge visited Bella Bella for day three of the Royal Visit. As Tanya Beja reports, the weather caused some last minute changes to their itinerary.

For me it was a media first: a briefing telling reporters ‘behave yourselves–or else.’

So, we were warned there would be no running, no shouting, no excessive camera shutter sounds, no leaning in for a better shot and no second chances: a single misstep and you’d be asked to leave.

Of course, there would be no missteps.

FYI: Media access here is very limited. We're told the Duke and Duchess want this to be a day for the children. @GlobalBC #RoyalVisitCanada

From where I am, I can only see the roof, a window of Gov. House. Lots of privacy for the children–which is clearly the priority @GlobalBC

All of the outlets, Canadian and British, went to great lengths to adhere to protocol and to unobtrusively capture rare images of a young Royal Family trying to appear as normal as any other.

The children were more than just adorable: they were happy, finding delight in the same things any child would.

This was a rare event for the media: we might not have access to images like this again for some time. The gravity of the moment wasn’t lost on anyone.

WATCH: There were a lot of firsts for Prince George and Princess Charlotte at the children’s party in Victoria, Charlotte took her first steps in public and even uttered her first public word. As Nadia Stewart reports, the day was special for the families that were invited to attend too.

Chris Gailus – Global BC (covered the arrival of the royal couple in Victoria, B.C.)

Covering a large-scale live event like the one that welcomed the royals on Sept. 24 is one of the great challenges for those of us in the television news business. I’m very proud of what we were able to accomplish after days of preparation and planning and everyone working together.

What I’ll remember most about the day the royals arrived is the sense of anticipation and excitement in the crowd on the lawn of the BC Legislature. Many arrived before 7 am for an event that wasn’t going to start for another 10 hours! Just the chance to get a glimpse of the Duke and Duchess of Cambridge was enough to sustain them, and they were not disappointed.

The cheer that went up when the Royal couple stepped off the plane with their children, an image shown to the crowd on a large screen at the legislature, was a terrific moment to witness.

The Royal couple was about 25 minutes late arriving at the legislature after that, partly due to a security scare on the grounds when police arrested a man carrying bear spray who was attempting to get near the stage area.

When the motorcade finally arrived, there was another wave of excitement and a loud cheer that went through the crowd.  Of course, because we were on the air for our broadcast, the only glimpse I ever got of the royal couple was on the TV monitor we used to follow the proceedings.  The absurdity of covering an event like that is that it happens almost entirely behind us.  I did manage to turn around during the broadcast when Will and Kate made their way down one of the long red-carpet walkways, greeting and meeting the assembled masses.

From our broadcast location, I saw the top of William’s head, and Kate’s blue hat… but that was it!

Still, it was enjoyable to cover a cultural event that highlights the history and tradition of our connection to Great Britain. And to do it with a team of journalists and technicians who are the best in the business made it even better! The celebratory pint at the pub at the end of the day was pretty good too.

The black shirt brigade that makes everything possible. Thank you to this awesome team for great royal coverage! #RoyalVisitCanada https://t.co/fjMJWEkanB

So we’ve all heard this royal couple is easy to talk to and widely accessible and that’s something I found out first-hand in Victoria.

As the Duchess of Cambridge was getting closer I was right at the fence and broke royal protocol.

READ MORE: Highlights from Royal Visit Day 1 – Will and Kate arrive in Victoria

And it worked! She gave me a big smile, shook my hand and asked me when I came here. I rambled, not quite believing this was happening. I rambled something about how I had moved and now live here and work for Global BC.

“They’re quite overwhelmed actually!” she said with a smile and a giggle and it felt like we were just two girls chatting about life.

Kate is without question a warm and personable royal who comes across like the girl next door. Nice that I can add this to meeting the Queen a few years ago. It’s official: I am now a fan girl!

When I heard Kelowna was going to be a destination for the Duke and Duchess of Cambridge, I researched how to request an interview with the couple.

Protocol is detailed on their website. It stated a request must be maid by mail.

As the saying goes, the answer is always no unless you ask!

I penned a letter and our station manager sent it by courier to expedite the process. Days and weeks went by, but no reply arrived.

Then, on the morning Prince William and Kate were flying to Kelowna and I was picking up a new notebook and pen to head up to spearhead coverage at Mission Hill Winery, our Global Okanagan TV station receptionist Sylvia stopped me.

She held up an envelope so I could read it: From “Kensington Palace.”

In my excitement to find out if they had granted an interview on that very day, which I was now woefully going to be under-prepared for, I tore into the letter.

(In hindsight, I should have been more careful to preserve the historic document!)

WATCH: A wide range of Okanagan food, and of course wine was on display at Mission Hill Winery Tuesday afternoon. Global Okanagan’s Doris Bregolisse was among those allowed in to the private event.

I opened the thick white letter paper enclosed and scanned it quickly.

Addressed to me, their press secretary thanked me for my request, but went on to say the Duke and Duchess were not granting interviews on their trip to Canada.

I didn’t feel surprised, nor let down too much.

I was just thrilled they received the request and replied!

And knowing the opportunity exists to even ask makes me slightly optimistic for a future request, should the royal couple return to the Okanagan.

I do plan on having the letter framed! 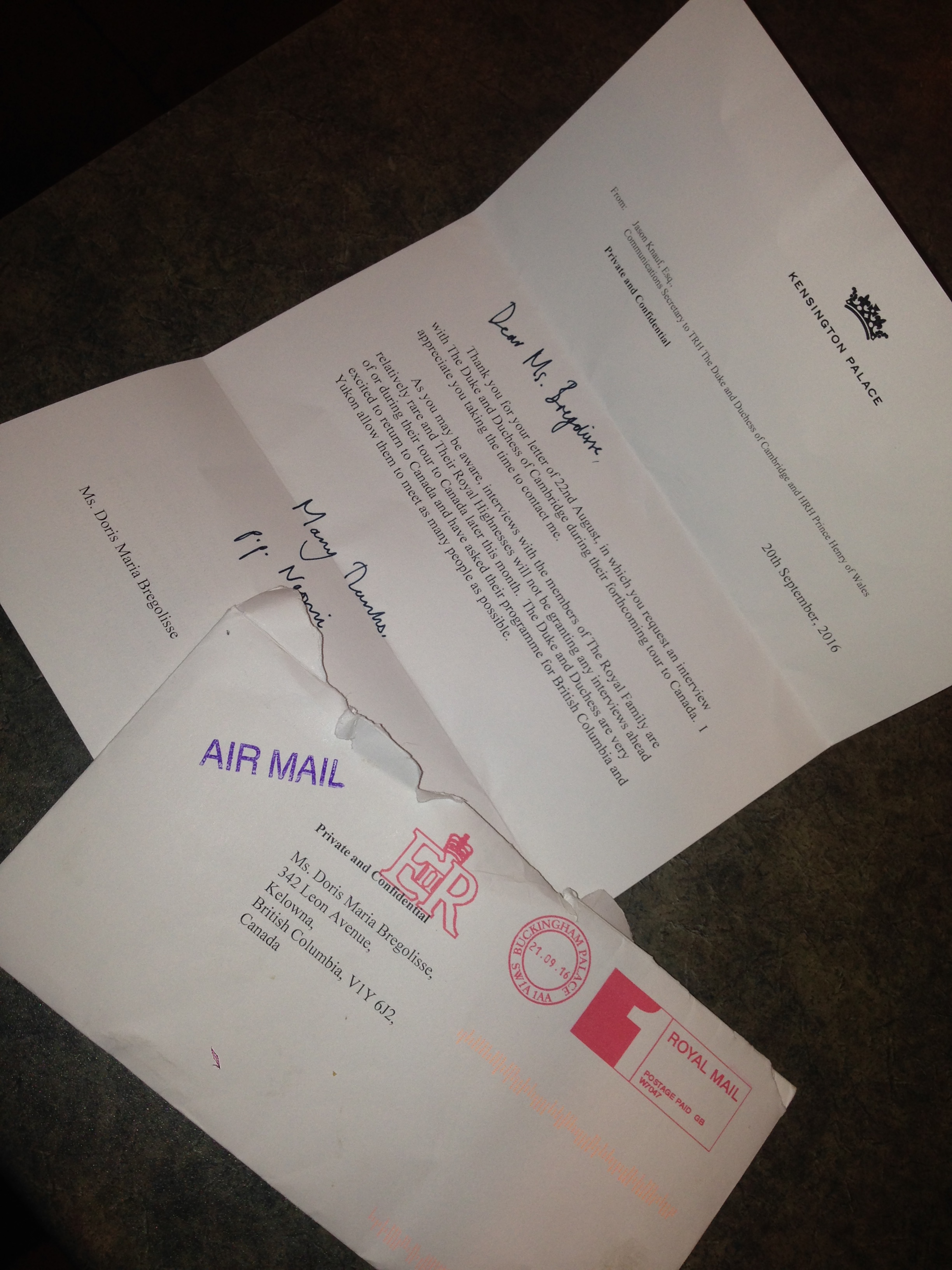 Another Global Okanagan reporter Lauren Pullen Tweeted about her experience going through the media screening for the royal visit. Check out the amount of gear in that room!

How much media gear can you get in one room? All you need is a #RoyalVisitCanada.. Waiting for screening! pic.twitter.com/mjOT5d7xjb

Global BC reporter Aaron McArthur got to travel all the way to Haida Gwaii for the royal visit on Friday.

To add to the uniqueness of the experience, McArthur had to travel on a cargo plane, along with dozens of other pool reporters, to get there.

Here is his perspective on the day spent with the royals:

“Haida Gwaii is so remote, it’s a good bet most British Columbians have never visited the archipelago.

For the Duke and Duchess of Cambridge to visit was both a unique opportunity to showcase this wonderful place to the world, and a logistics challenge that required the considerable talents of the Canadian military to pull off.

The royal couple spent a little more than three hours on the ground around Skidegate.

I get all the glam assignments. media pool all jammed into a C130 for the trip to Haida Gwaii. #royals @GlobalBC pic.twitter.com/WWsPGYX3eV

Photo to go with the last tweet. She may not be comfortable, but the C130J is a cool aircraft. pic.twitter.com/MLJpUAhjnX

The 90-minute flight was surprisingly comfortable considering the only seats were made from nylon webbing strapped to metal benches. There wasn’t much of a view either (no windows), but the professionalism of the members of the Canadian Forces made the whole experience as pleasant as possible.

The flight put us about half-way to our destination. Buses, ferries and a good deal of waiting got us ready for a brief (less than five minutes) view of William and Kate touring the Haida Cultural Heritage Centre.

After one more brief media photo call, we were back on the bus, ferry, plane and finally arrived back at the hotel in Victoria at 8:30 p.m. that night.

We filed a story on Friday, and to the viewers it looked, hopefully, like a routine day in the field. It was anything but routine, but our days are rarely ever routine.”

McArthur and his camera operator Cody Chaban also had to get creative to edit a story for the 6 p.m. news.

WATCH: First Nations culture was again the focus of the Duke and Duchess of Cambridge as they spent the day visiting Haida Gwaii off the west coast of British Columbia. Aaron McArthur was along for the trip and has these details.

For the full Global News coverage of the royal visit, go here.