TORONTO — Nearly 20 years to the day of a horrific impaired driving crash that left a young college student severely injured, she’s thanking a passerby for stopping to hold her hand.

A simple act of kindness that got her through the most frightening moments of her life.

Laura Beauparlant was 18 years old, heading back to the city, with a car full of fresh laundry and groceries from a weekend at her parents’ house in Guelph, Ont on Nov. 12, 1995.

The last thing she expected to see on the highway was a set of headlights directly in front of her. A head-on crash with a driver who would later be charged with impaired driving and serve several months behind bars. A man, she would eventually forgive.

Beauparlant swerved, went airborne, and landed in a ditch. She was trapped in her vehicle, badly hurt.

That’s when “Martin” arrived. Martin Meres had been driving a few car lengths behind Beauparlant and witnessed it all. He immediately jumped into action. He pulled over and ran to her side, where he remained for what felt like an eternity.

“That was the longest two or three minutes of my life,” said Meres.

“I remember just talking to Laura and trying to keep her mind off what had happened and praying and hoping that professionals would arrive quickly and take care over.”

Beauparlant remembered Martin too. His first name, his buzz cut and his smokey breath. But that’s it.

There was a street light behind him, and it shone, so it was difficult to make out his face — only a silhouette.

For years, Beauparlant went through surgery after surgery to deal with her many injuries, in addition to therapy for the emotional scarring, but the man who stroked her hand, and her hair, and comforted her in those moments of terror, stayed with her. And she wanted desperately to thank him.

“I had no idea that those two or three minutes, the fact that I pulled over and stayed with her until the help arrived had that big of an impact on her,” Meres said.

The issue for Beauparlant was that she couldn’t identify him, as she hadn’t been able to see his face, and didn’t know his last name.

When he called the next day to check up on her at the hospital, a nurse had a rough pronunciation of his last name, but no exact spelling and no contact information.

Fast forward nearly two decades and Beauparlant has posted her story on Facebook about her search for the man who was her hero.

In days, it’s shared tens of thousands of times.

And then a message pops up. 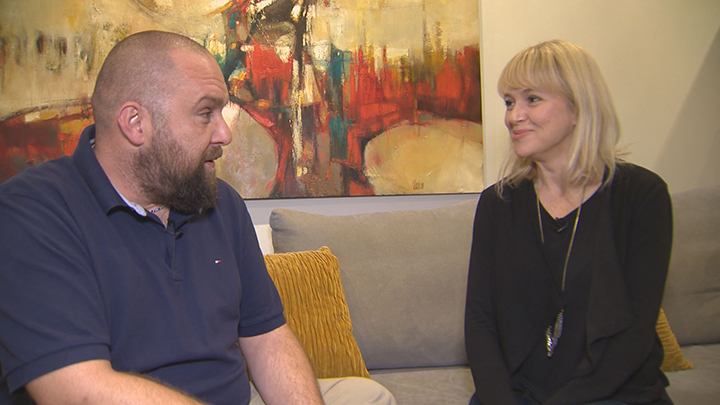 It was from the woman Meres had been dating at the time of the crash. She’d remembered him telling her about Laura, about the crash, and about an unusual passenger inside the car that day.

“I looked around the car hoping the situation wasn’t going to go from bad to worse,” Meres said.

“And almost had a heart attack because Laura at the time had an iguana for a pet that she didn’t tell me about!”

A pet iguana that also survived the crash.

Beauparlant knew that if a “Martin” should ever come forward as being her hero, that he would remember there was an iguana in her car.

Now Beauparlant and Meres are forever bonded by a few minutes, 20 years ago.

“I really believe that if we did more of these little kindnesses to other people the world could be a much better place,” she said.

Both agree there’s another message from their story.

“Don’t drink and drive, I hope that message, I hope that eventually people will get that part of the story,” said Beauparlant, with Meres adding, “Here’s hoping.”