Election’s over, but most poll workers still haven’t been paid

It was a long day for everyone.

Chantara Blair says she got more — and less — than she bargained for.

Blair, who worked at a Red Deer-Lacombe polling station on election day, claims she’s been given the runaround, forced to fight for overtime and wait weeks longer than she expected to get paid.

On the heels of Canada’s longest federal campaign in 140 years, Elections Canada is scrambling to meet its swollen payroll amid a flood of employee complaints.

But despite the increased financial and logistical Elections Canada says it’s meeting its obligations and that any complaints around payment or delays are the result of confusion.

“Elections Canada is taking every measure to issue payments as quickly as possible.  Every worker will be paid,” spokesperson Diane Benson said in an email.

“Elections Canada is meeting its service standards with regard to paying election workers. We surpassed these standards at previous elections; however, given the larger workforce and longer election period in 2015, we are meeting but not surpassing these service standards.”

Blair isn’t so sure.

“There was minimal training,” she says.

Blair said she didn’t know how to deal with people who came in ready to vote, only to be turned away because their names had been crossed off the list — they’d voted already in advanced polls.

“We dealt with a lot of angry people,” she said.

“There should’ve been some sort of process in place.”

Most of the day went smoothly, albeit hectically. There were no organized breaks so they ate at their tables and spelled each other off for bathroom breaks.

When it came time to count the ballots … we were missing a ballot,” she said. Her station had given out 230 ballots that day, but there were only 229 in her box after polls closed.

And they didn’t know what to do.

“We didn’t know if you can just write down that there’s one missing,” she said.

“We ended up putting the one that was missing under the ‘spoiled'” column on the tallying sheet.

Blair would be fine with that, for the most part, if she didn’t feel she was being shortchanged. She doesn’t know why she isn’t getting paid for the extra two and a half hours she put in during what was supposed to be $210 for a 14-hour workday.

“I’m still fighting with them for that.”

She also claims she and her colleagues got a pamphlet saying they’d be paid within two weeks of the election — not four to six weeks as they’re now being told. 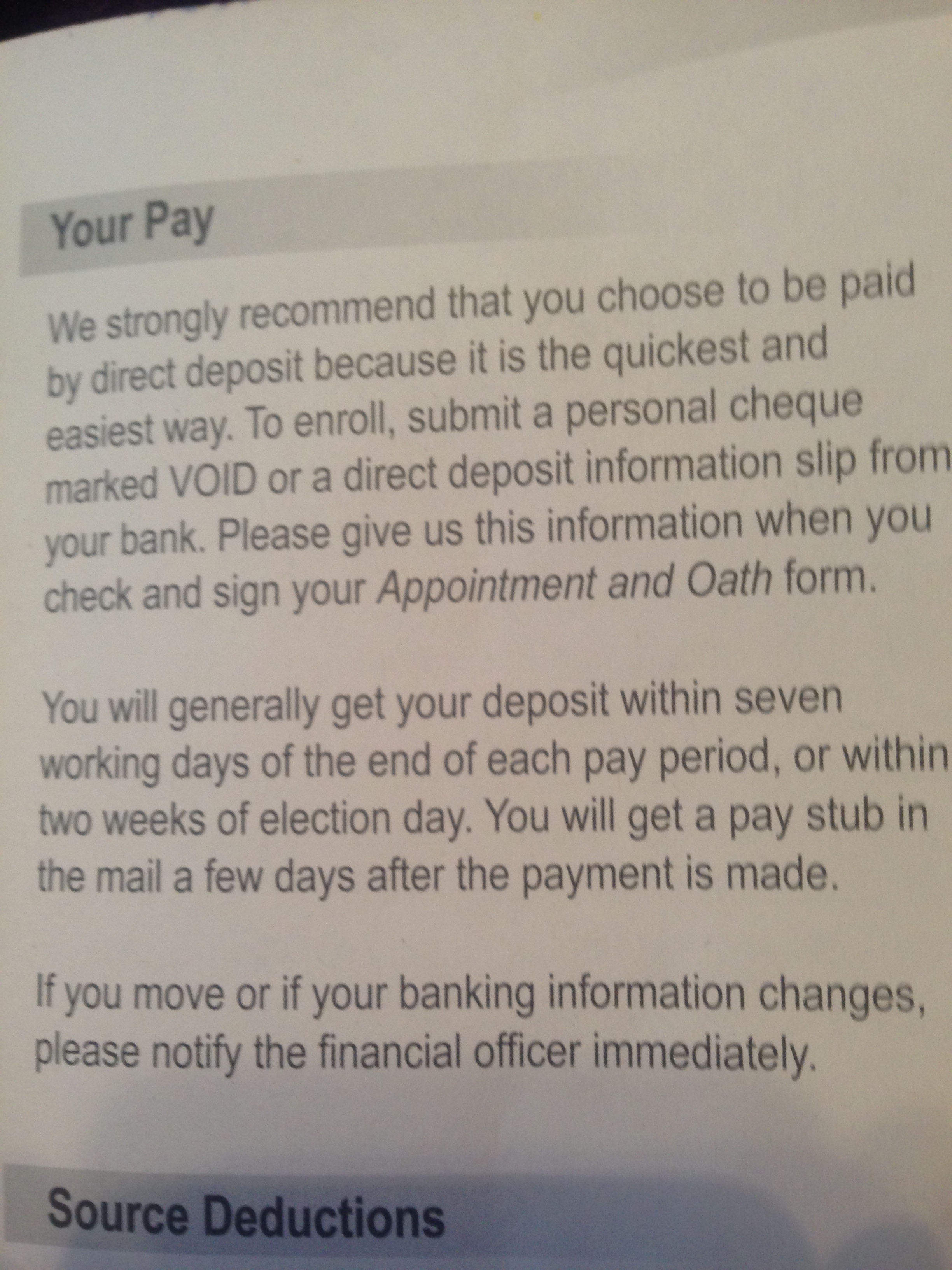 The two-week window is for returning office workers, Benson said: Polling station workers should expect to get paid within six weeks of the election.

A “small percentage” of workers (less than five per cent, Benson said) may have to wait eight weeks before they’re paid.

“These standards are the same as for the 2011 general election,” she wrote.

And, Benson said, people who work election day are paid a daily, not hourly rate.

“Some positions are hourly rates but others are set rates for election day or advance polling days.  Elections Canada must follow these set rates.”

The Wal-Mart employee took on the election day gig as a way to get extra cash for herself and her 18-month-old, Adalyn.

“People are just so frustrated with them,” she said.

“I think there’s a lot of people who really did this for the extra money. … Who wants to work a 16-and-a-half hour day to be paid two months later?”