WATCH ABOVE: A selection of video footage of the rain and hail storm that hit Calgary on Tuesday night.

CALGARY – Rain and toonie-sized hail pummeled the City of Calgary and surrounding area on Tuesday afternoon, closing roadways and cutting power to thousands of customers.

The deputy chief of the Calgary Emergency Management Agency (CEMA) said 911 received six times the average number of calls during the storm. More than 100 service calls remained for trees that had been downed on Tuesday night.

“To our knowledge no one has been injured as a result,” said Sue Henry at an 8 p.m. press conference. “EOC was staffed with Calgary emergency agency staff who provided situational awareness and updates.

“The good news for Calgary is the predominance of the storm has passed.”

Henry said there was still the potential for additional rain in the Calgary area between 8 p.m. and midnight, and noted “any amount of rain can be a problem for us again later.”

Henry also confirmed EOC had received reports that a roof was blown off a residential complex in the city’s northeast, but did not have crews on scene. She said the impact of the storm on the city was widespread because of the way the rain hit the city’s catch basins. 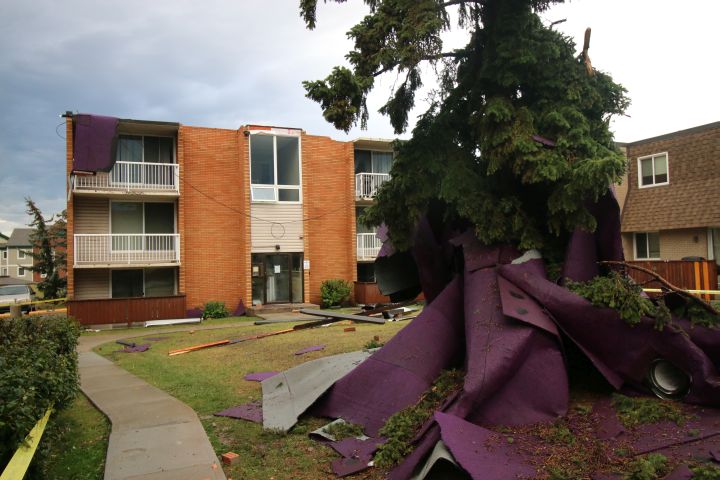 Calgary Transit said CTrains were traveling at a reduced speed “due to extreme weather conditions” and to expect delays on all lines just after 5:30 p.m. Calgary police said many underpasses were temporarily closed due to flash flooding. Power outages affected traffic lights, and police reminded drivers to treat flashing or blacked-out intersections as four-way stops.

Enmax reported power outages affecting more than 20,000 customers at one point Tuesday night. About 640 residents in the Marlborough Park area remained without power just after 10 p.m. For the most recent list of affected areas, click here.

Global’s own Melissa Ramsay captured this video of a boat being towed down the street in the southeast community of Douglasdale:

This man gots the right idea – he has a boat! Our street is a river anyways… #abstorm pic.twitter.com/8vVnkZwCUr

Will my property taxes increase now that I own ocean-front property? @nenshi #abstorm #yyc pic.twitter.com/jET6sS4Qwi

A Global viewer in the city’s northeast sent in this photo of a vehicle on Marshall Road, partially covered with hail and submerged in water:

Global viewer Tim Oliver submitted this photo of a downed tree on 2 Street around 8 Avenue N.E. just before 6 p.m.:

Global viewer John Crassoski sent in this photo of trees downed in the 1800 block of 14 Ave. N.E.: 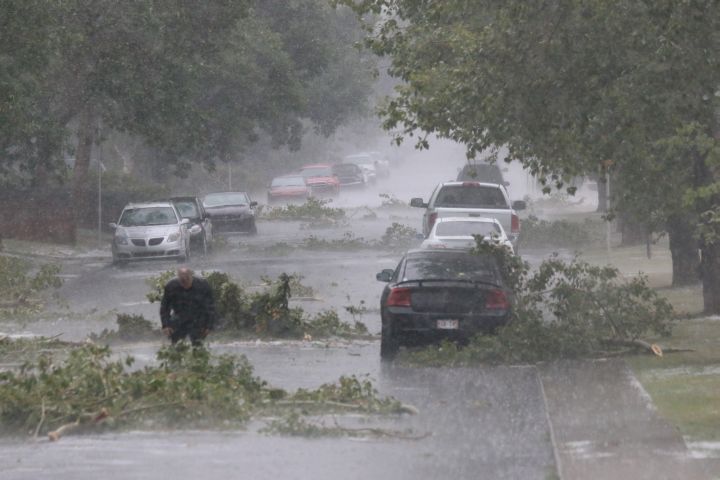 A Global viewer in Elbow Valley submitted these photos of hail just before 5 p.m.:

This is what the Hail Storm looks like from our Newsroom @GlobalCalgary pic.twitter.com/MavmU9b5Kx

For the latest information on weather alerts in Calgary and southern Alberta, click here.

Environment Canada issues a special weather statement when there is potential for an event that may approach the warning or watch criteria.

A severe thunderstorm watch is issued when there is a good chance of severe weather developing.

A severe thunderstorm warning has four elements: winds greater than 90 km/h; hail greater than 2 cm; flooding rains; or a tornado.

To get real-time weather for your area, download the Global News Skytracker weather app.