Watch above: A tornado touches down in the Tsuu T’ina Nation. Jayme Doll reports

CALGARY – A tornado warning ended for the city of Calgary at around 2 p.m. on Wednesday afternoon. Environment Canada confirmed the tornado touched down just north of Priddis at 12:53 p.m. Funnel clouds were seen west of Cochrane, over southern areas of Calgary and near Strathmore.

“We have had reports of damage on the Tsuu T’ina First Nation and it is possible that is the location where a touchdown has occurred,” said Environment Canada’s Bill McMurtry.

Scroll down for photos of the storm

McMurtry said the tornado did not touch down in Calgary. He said there have been eight tornadoes to hit Calgary in the last 40 years or so, but all were at the very lowest end of the scale used to rank damage.

Watch below: Global’s video coverage of the funnel clouds and tornado in the Calgary area on Wednesday afternoon

The chief of the Calgary Emergency Management Agency (CEMA) said a number of buildings asked people to evacuate Wednesday afternoon, but said that’s not the best practice.

“We ask you not to evacuate,” said Tom Sampson. “The majority of people killed in tornadoes are killed in the debris that comes out from them. You’re safest indoors and away from the windows.”

Sampson said emergency centres didn’t open in this incident, but city staff were positioned in the Bow Tower to observe the weather conditions for the first time in five years. When asked about any plans to install warning signals in such emergency situations, Sampson said it’s hard to determine their efficacy.

“The sound transmission…and to get them to all locations of the city is almost impossible, so no plans at this point to install air-raid type sirens.”

Watch below: Some of the best videos we received from Global viewers of a funnel cloud forming over Calgary on Wednesday afternoon.

If threatening weather approaches, remember to take shelter immediately. In the case of a tornado, it’s best to take shelter in a basement. If that is not possible, put yourself as far away from outside walls as possible.

“If you hear a roaring sound or see a funnel cloud, swirling debris near the ground, flying debris, or any threatening weather approaching, take shelter immediately,” said Environment Canada in its alert.

READ MORE: What to do during a tornado warning

Environment Canada said reports indicated the severe thunderstorm was located just west of southwest Calgary at 1 p.m. and was moving toward the southeast at 30 km/h. The neighbourhoods of Bridlewood and Shawnessy were in the path of this tornado, said the agency. There were no reports of anyone being injured. 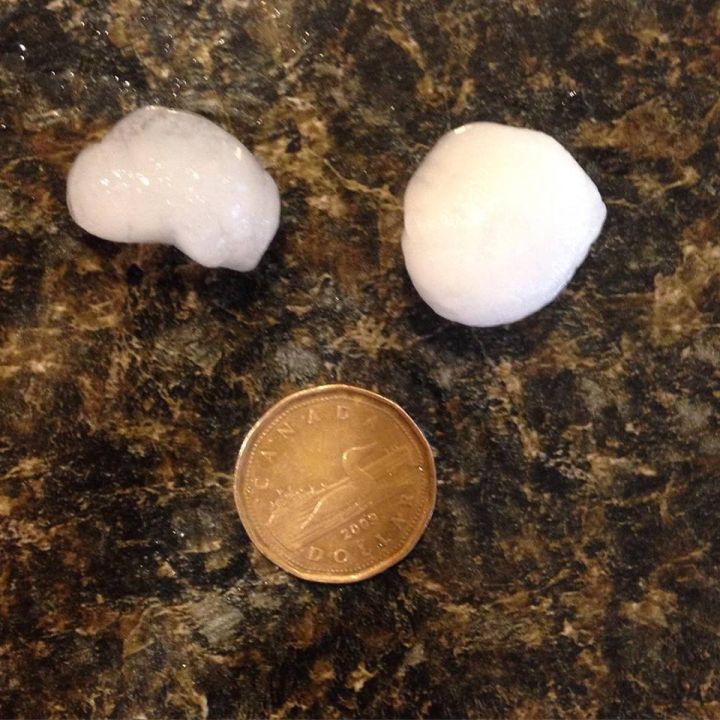 Severe thunderstorm watches were in effect for other areas of southern Alberta until about 7 p.m.

Environment Canada issues a special weather statement when there is potential for an event that may approach the warning or watch criteria.

A severe thunderstorm watch is issued when there is a good chance of severe weather developing.

A severe thunderstorm warning has four elements: winds greater than 90 km/h; hail greater than 2 cm; flooding rains; or a tornado.

To get real-time weather for your area, download the Global News Skytracker weather app.

With files from Nicole Mortillaro, Tony Tighe and Jayme Doll