TORONTO — Elle Australia magazine editor Justine Cullen is defending her choice to make what has arguably become an iconic breastfeeding cover available only to subscribers.

The exclusive cover, which features supermodel and new mother Nicole Trunfio breastfeeding her son Zion, thrust the “normalize breastfeeding” movement back into the spotlight with all the praise it’s received on social media — something Cullen admitted she wasn’t expecting.

“The only real negative feedback we’ve had, in fact, isn’t from people saying they dislike or disapprove of the image, but of the decision I made to run it on a subscribers-only version rather than the one on sale in supermarkets and newsagents,” Cullen wrote in a post on Monday.

“The argument goes that by sending this cover directly and privately into our readers’ letterboxes, rather than putting it on the shelves, we are reinforcing the idea that breastfeeding is something that needs to be hidden. That, in some way, we’re negating our own gesture.”

She explained that her decision was a “commercial” one, saying her job is to sell magazines. And choosing a cover that “will appeal to the widest possible audience” is how the industry does that. Cullen said she wasn’t willing to take the risk of the breastfeeding cover being pulled from shelves or it needing a sticker over a part that was deemed offensive. That, she said, “would spell disaster.”

“In an ideal world no one would have an issue with seeing breastfeeding on the cover of a magazine. But it’s not an ideal world.”

“Supermarkets are where we make a large proportion of our sales. Not everyone walking through a supermarket is our target demographic, nor are they all going to be understanding of the message behind this cover…If we’re not willing to throw our entire business behind a message, does that mean we shouldn’t make the statement at all?”

The cover model has expressed her gratitude to the magazine “for being so bold and making such an encouraging, positive and healthy statement” with the breastfeeding cover. On her Facebook page, Trunfio wrote that “there is nothing worse than a mother that is judged for feeding her hungry child in public.”

The new mother has since also shared the difficulties (and pain) she experienced with breastfeeding because of a condition her son had. 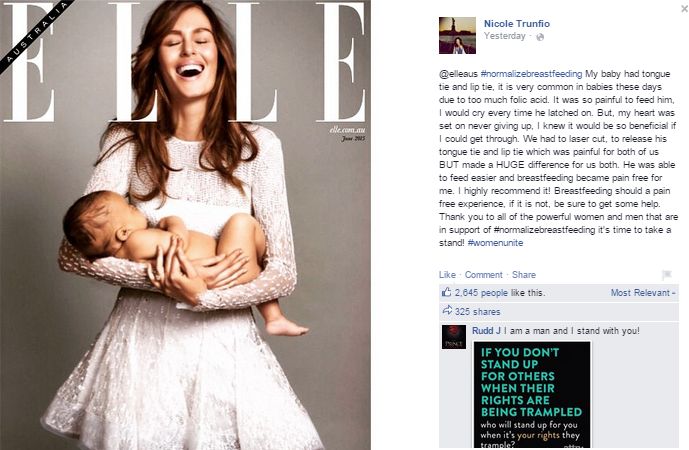 READ MORE: ‘It felt like we were going rogue,’ says mom who let friend breastfeed her baby

Trunfio’s not alone. Nor is this breastfeeding debate anything new.

In 2012, Time magazine came under fire for its controversial cover of a model breastfeeding her four-year-old son by a caption that said, “Are you mom enough?”

If Time magazine was honest about their new cover… Via @someecards pic.twitter.com/Dv6pqEAO

SOUND OFF: What do you think of Elle Australia’s exclusive subscriber cover? Let us know in the comments section below. (Scroll down to see two videos that aim to normalize breastfeeding.) 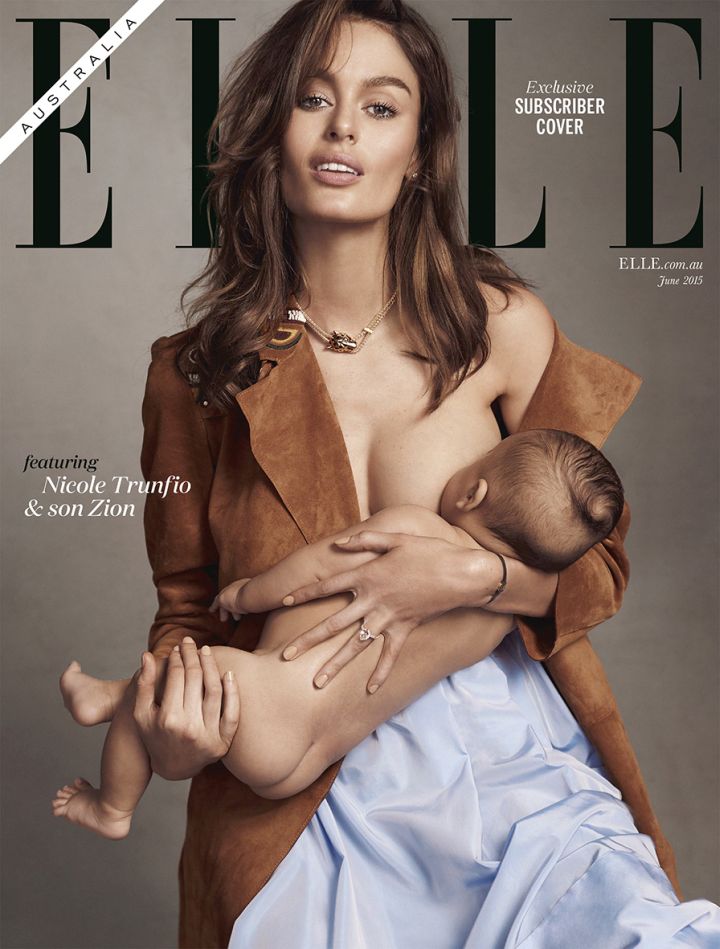