WATCH: A B.C. company is launching a David-and-Goliath battle against a multi- billion dollar U.S. retail giant. As Nadia Stewart reports, it’s not the first time ‘Forever 21’ has been accused of copying other people.

VANCOUVER – A Richmond clothing company is claiming the retail giant, Forever 21, has ripped off two of their designs.

Granted, which has been around since 1978 and designs hand-knitted items to sell in their store and online, recently discovered the copied items on Instagram.

Co-owner Brian Hirano was looking at clothes on the popular social media site when he noticed the two very similar-looking sweaters. “I often check the Internet for Granted sweaters, how it’s worn or which ones are popular,” he said. That is when he noticed a post from someone saying they had purchased a sweater that looks like a Granted design, from Forever 21.

“These particular designs have been with our company for about five or six years,” said Hirano. “My sister, my mother and I are all on the design side of things, so, again, we’ve been making them for over 30 years.”

Hirano has reached out to Forever 21, but has not heard anything back.

“I was definitely angry in the beginning, but right now I have calmed down,” he said.

WATCH: Brian Hirano of Granted speaks with Global News about his battle with the retail giant Forever 21.

Granted’s designs are not copyrighted, but an Instagram post from the company reads in part, “As independent business owners and designers of our garments we feel it is important to inform you of an unfortunate and ongoing problem in our industry. This utter lack of respect has literally left us shaking our heads in disbelief.”

“The pressure to feed this trending “fast fashion” machine is pervasive and people are contracted by these big companies to scour the internet to find original designs without any regard, make a profit and offer no compensation to the original designers. They do not see the negative ripple effect they cause, only looking at short term profits and do not value a sustainable business structure.” 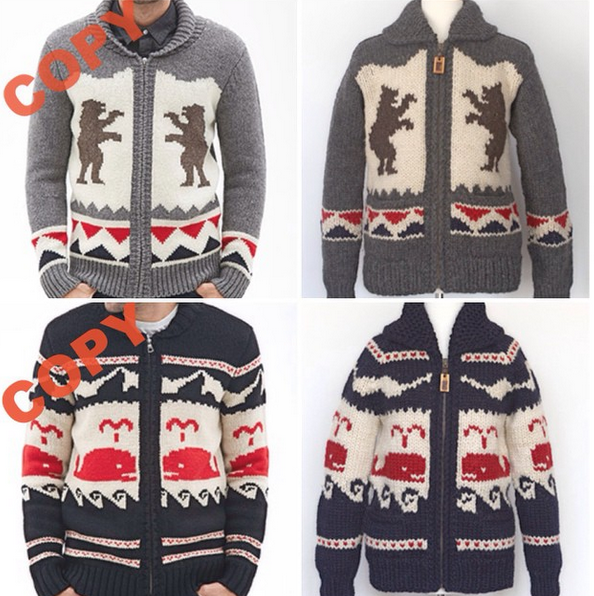 Granted is currently seeking legal advice on how to proceed, but their story is gaining traction.

Comedian Wyatt Cenac has tweeted out his support for Granted:

It’s messed up @Forever21 ripped off sweaters from @grantedclothing with what appears to be a ripoff version of me. pic.twitter.com/MBFGG3yBYR — Wyatt Cenac (@wyattcenac) January 7, 2015

“This isn’t right and it shouldn’t happen in any industry,” said Hirano.