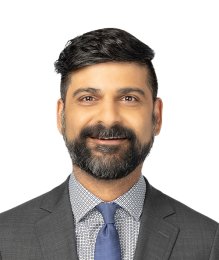 “I grew up watching Global Edmonton (then ITV) and see news as a critical public service; a chance to give a voice to those who might not have it and to keep the public informed about what’s going on in their communities,” he said.

During his time reporting, Vinesh has had the chance to cover all parts of northern Alberta and beyond. News coverage has taken him to Yellowknife, Palm Springs, Seattle, and New York.

Prior to becoming a co-anchor on Global News Morning and Global News at Noon in December 2020, Vinesh was Global Edmonton’s city hall reporter — focusing on civic affairs issues and the impacts of decisions made at city hall.

“The city is growing and changing at a rapid pace, and it’s important to hold councillors to account about the decisions they make.”

Vinesh started his career at independent television stations in Medicine Hat and Lloydminster. A graduate of the Radio and Television Arts program at NAIT, he was born and raised in Edmonton.